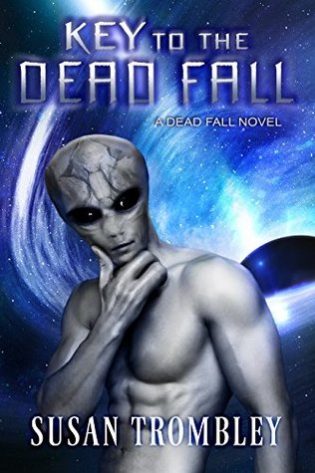 Key to the Dead Fall
by Susan Trombley

“…a reverse harem story where the male portion of the triad is distinctly nor human. I loved it. ”
~ Under the Covers

The Dead Fall is some kind of wormhole that appears in worlds all across the galaxy and sucks a load of junk, as well as people through it. In the Dead Fall only the strong survive, to be anything else just makes you prey for the bigger and more powerful. Evie isn’t the strongest, but after a life time trained by her crazy survivalist father she is savvy and she knows what to do to survive. Until she’s caught and put up for auction for the population of the Dead Fall, a population that doesn’t see many women. She didn’t expect to be saved and certainly not by the stereotypical grey alien; he even has his very own flying saucer. It becomes even more surreal when he tells her he is keeping her safe until her fated mate arrives…

Susan Trombley first caught my attention with her sci fi alien romance The Scorpion’s Mate, a book I loved as it did one of my favourite things; it made the aliens really flipping alien. But Trombley had another surprise for me, a reverse harem story called Into the Dead Fall, a story I adored because it contained not only one, but two very alien aliens. With Key to the Dead Fall, the second in the Into the Dead Fall series we once again have a reverse harem story where the male portion of the triad is distinctly nor human. I loved it.

At first I was a little wary of this book, what we saw of Evie at the beginning of Into the Dead Fall was not good. She seemed like crazy, spoiled and just not very likeable. As I read this book my opinion of her changed. Evie was tough, a survivor and there’s nothing I like more than a strong heroine. Moving on to her alien husbands…

Firstly we have Grey, who is your stereotypical Roswell alien. Grey skin, big black eyes, head seeming to large for his slender sexless bodies. I won’t spoil this book, but I can assure you that his physicality does change. What I loved about their relationship was how they developed a friendship first, they develop a very strong bond before anything sexual ever happens.

Now we have husband number two: Doshakeren. He’s like a vampire. Only an alien vampire who grows bigger when he drinks blood. I never felt we got as close to Doshakeren until the end of the book. His and Evie’s relationship was the exact opposite of Evie and Grey’s. They got right on top of the sex stuff first and then slowly bonded more emotionally afterwards.

What I liked most about this book though was the dynamic between the three, Doshakeren comes from a culture where multiple partners were part of a family or as he calls it, a Nest. It was kind of adorable seeing him building his new Nest with Evie and Grey as they both scramble to get their head around the idea. Grey because his race no longer have sexual relationships and Evie because this is outside the norm. My favourite parts of this book were ore towards the end, when they were all together and building a home for themselves. I loved seeing that dynamic between the three of them in play.

I really enjoyed this book, I know the cover is a little…odd, but if you are a fan of alien sci-fi romances then you need to give this a try. If you aren’t this would definitely be plunging you into the deep end. But at the end of the day, alienness aside it was a great romance between some good characters.

Lol, yes the cover is odd (that was my first thought) but I may check it out anyway.

Awesome review suzanne! Will check this out!! Shared on all my socials!!

Throw Back the Covers (64): Sunday Post & Stacking the Shelves - Under the Covers Book Blog