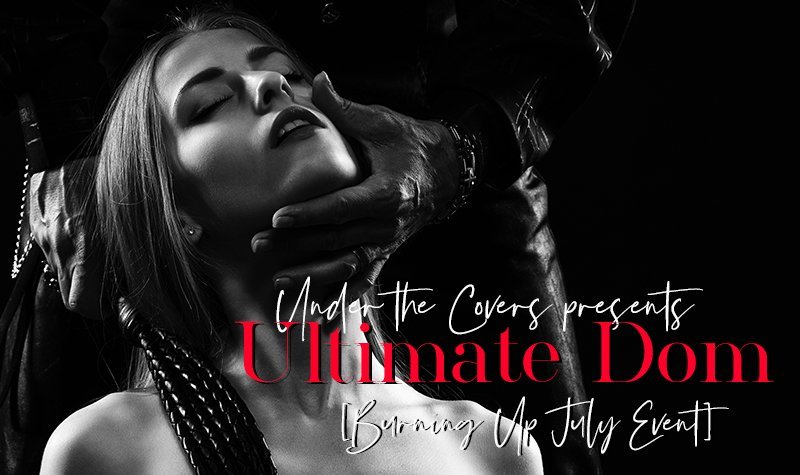 Welcome to what used to be called just Dom’s Dungeon in our BURNING UP JULY event!  Over the years, we’ve added a few extra categories in looking for the hottest heroes of the year, and this year we’ve asked some of our favorite authors to come and tell us why they think the hero they like should win.

Kicking things off, THE DOM’S DUNGEON, the one that started it all. These are the Doms that stand out recently and you get to vote for your favorite.  Voting will run until Saturday July 21, 2018 end of day and winner will be announced Sunday July 22, 2018.  And because we are nice like that, check out the end of this post to see the week-long giveaway we are running during the competition.

Frederic d’Estang: performer, professional villain and Evie Bell’s youthful crush. Frederic is the hero of SOFT LIMITS, a sweetly sadistic man who delights in drawing out Evie’s submissive side. She needs a little rough darkness in her life and he’s just the man to provide it. My inspiration for Frederic is the very charming and villainous Rufus Sewell.

Why Frederic d’Estang is the Best Dom:
– unnerving green gaze
– dark, wicked good looks
– loves to watch you cry
– loves to make you cry
– wants you to take just a little bit more pain, for him
– sweetly charming even with a belt in his hand
– asks politely if he can put his hand around your throat
– endearments in French, and lots of them
– will coax all your darkest fantasies from your lips and make them a reality
– feeling vulnerable when it’s over? So many kisses and cuddles in his lap after
– will always leave you with a smile on your face…and wanting more 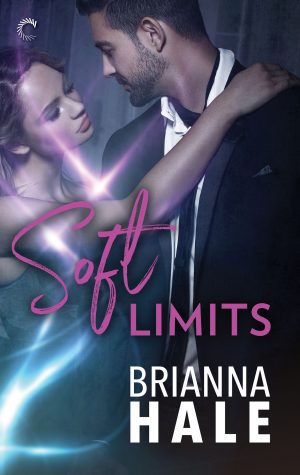 Graduate student Evie Bell spends her days ghostwriting memoirs and her nights playing out her most intimate sexual fantasies by penning fan fiction. When a famous stage actor bursts into her life, she's drawn to his dark, sensual presence, despite herself.

In Paris, Frederic takes Evie firmly in hand, leading her down a sensual path neither of them could have imagined, and pushing them both dangerously near their limits.

I call him Daddy.

Evie is wary—fearing Frederic is a villain both onstage and off—but again and again, Frederic draws her in. Yet the closer they become, the more Frederic holds back, wanting to protect Evie from his despicable truth. He isn’t the man she believes him to be, and his secret may very well destroy them.

Next from Brianna Hale 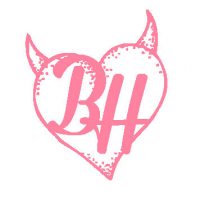 There's nothing Brianna Hale likes more than a large, stern alpha male with a super-protective and caring streak, and when she's not writing about them she can usually be found with a book, a cocktail, planning her next trip to a beautiful location or attending the theatre. She believes that pink and empowerment aren’t mutually exclusive, and everyday adventures are possible. Brianna lives in London.

Hello, all! I’m Fran’s favorite problem child, Angel Payne! It was so much fun when she asked me if I’d read some delicious Dominant heroes during the last year, and I begged her to let me talk to you about TWO of my favorites, because honestly, it was impossible to pick just one.

My first pick has to be Ryan Steel, featured in the final three books of Helen Hardt’s Steel brothers series: Shattered, Twisted, and Unraveled. (The entire series reading order is right here: https://amzn.to/2JoI1Oo) I love Ryan because of his heartbreaking back story, his steadfast strength, and his ability to see the woman beneath Ruby Lee’s tough cop exterior. He coaxes Ruby’s sensual side out with patience and perseverance, not growling commands and a bunch of alpha guy chest-beating–though he certainly knows how to bring on the decadent domination when he knows that’s what Ruby needs too. In short, this man always puts the needs of his woman first–and Helen herself dreamcasted the perfect guy for him, the gorgeous William Levy. Swoon!

Ryan Steel is known in Snow Creek as the handsomest Steel brother with the most jovial personality. Now that his busy grape harvest and winemaking season is over, he's happy to spend time with his family and help his brothers, Talon and Jonah, celebrate their impending nuptials. The Steels are taking a well-deserved break from the conspiracy surrounding them...until an unlikely woman and a long-buried secret shatter Ryan's world.
Detective Ruby Lee has been on her own since she was fifteen. When her past collides with the Steel family's mysteries, she's determined to find the truth. She has her own issues, and she's not looking for a relationship, despite her all-consuming attraction to Ryan Steel. The gorgeous dark-haired man gets under her skin anyway...and he needs her.
Together they explore both of their histories, but those pasts could cost them a future.

Secondly, I have to gush about a writer I have recently discovered, Bronwyn Green, and her unforgettable Dominant hero, Angus Domhnull, from the 7th book in her Bound series: Rewritten. While Bronwyn’s confessed to me that she dreamcasted Aidan Turner as Angus, I instantly pictured the beautiful Benedict Cumberbatch in the role, and didn’t look back. Angus is a moody sci-fi writer struggling with a tragedy from his past that’s brought on a really long writer’s block–until his publisher sends a new assistant who helps him get his muse back. He’s everything you want in a dashing British Dom: arrogance, sensuality, a wicked wit–and oh dear God, a twist on Darcy that you will never, ever, ever forget. I’m still in book hangover from this devastating man! Go and check out the works from both these amazing women. You’ll be completely thanking me! 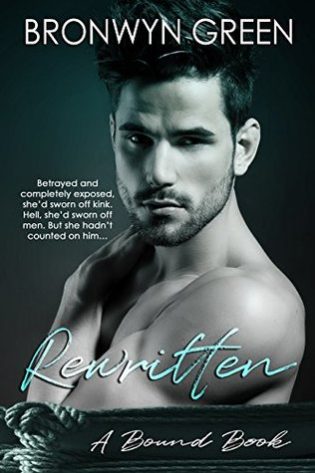 One of the hottest voices in Sci-Fi, Angus Domhnull is renowned not just for his sweeping sagas, but for his stupidly gorgeous looks—and the fact that he’s taken almost five years to finish his latest novel. Now, assistant editor, Eliza Burrows, is stuck minding him, and his brooding nature is pushing every sexually submissive button she has. But even if Angus wasn’t her publisher’s star author, he’d be off-limits—after a painful betrayal, Eliza doesn’t play anymore, and she’s not about to start again with him.

Unable to deliver his long-awaited manuscript, Angus is saddled with a keeper—and her creative input—that he never asked for. Despite the resentment and animosity brewing between them, he finds himself drawn to Eliza. As he learns more about the intriguing woman behind the prickly facade, he falls for her, hard and deep.

When the attraction between them ignites, Eliza lets Angus bring her to one place she swore she’d never go again—her knees. He wants more than just her submission, but her past and the secrets she’s hidden could destroy everything...

As long as you’re shopping, be sure to check out my newest, as well: the Bolt Saga is my steamy summer read in the form of a superhero romance: an electrifying blend of action, adventure, and smoking-hot sensuality with e-book covers featuring the stunning Anthony Kemper and Hannah Lundquist! Available everywhere!

Now it’s time for you to vote!

Today’s Question:
What’s the latest Dom you read and loved?

Wolf henrikson a dom from Laura Kate’s blasphemy series, who specializes in Exhibitionism!!! The guy was HOT!! The book Eyes On You! Shared on all my socials!!

Last Dom I read about and loved was Mad from Power Play by Cara Dee. He was just quiet and yet powerful Ugh, I couldn’t explain it if I tried but he was hot!

Master Holt from Cherise Sinclair’s BENEATH THE SCARS. He was totally worth waiting for.

I’ve gone back a year on my Goodreads and I haven’t read a Dom book in a long time.

Playing His Way by Erika Wilde.

Tristan from At His Mercy by Shelly Bell

Ryder from His to Claim by Shelly Bell