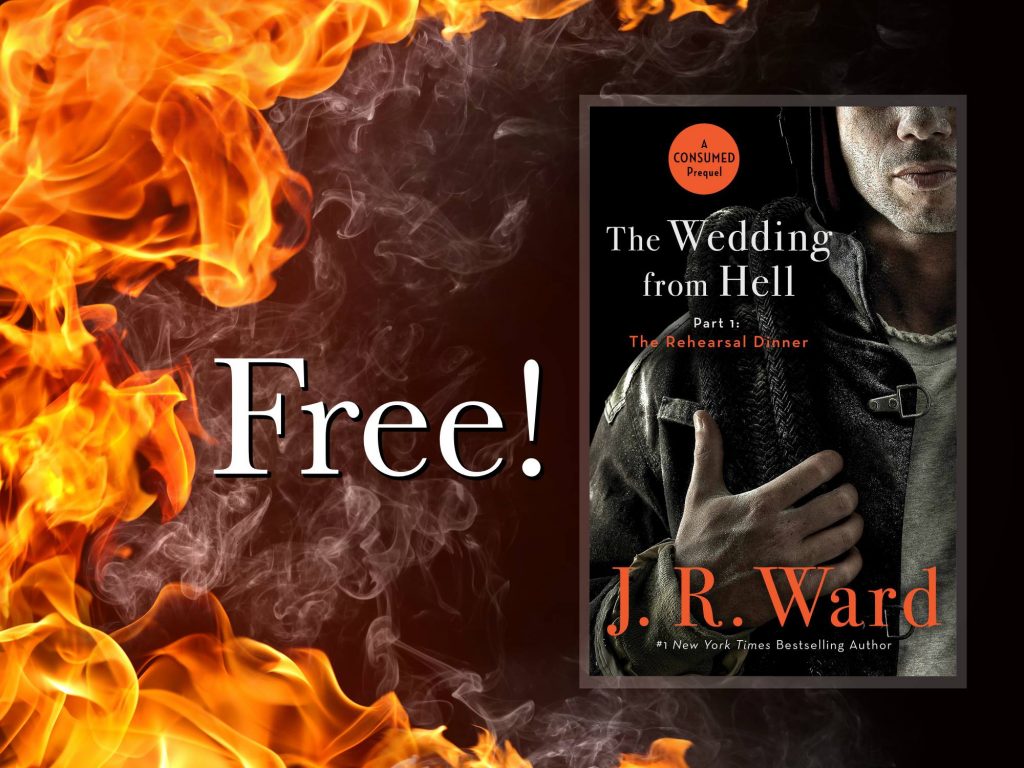 The Wedding From Hell: Part 1: The Rehearsal Dinner
by J.R. Ward

Don’t miss #1 New York Times bestselling author J.R. Ward’s three-part ebook serialization: The Wedding From Hell. This exclusive prequel to her upcoming standalone suspense Consumed (available in Fall 2018) takes us back to where it all started between arson investigator Anne Ashburn and ‘bad boy’ firefighter Danny Maguire. The Wedding From Hell is a sexy standalone novella that sets up Consumed’s storyline, leaving fans hungry for more and dying to snatch it up.

It’s a classic recipe for disaster: Take one bridesmaid who thinks pink is the root of all evil, mix with a best man who’s hotter than a four-alarm fire, add in their explosive sexual attraction, a nightmare bridezilla, two cat fights, and an emergency call, and you have the wedding from hell.

T minus 48 hours ’til blastoff

Because women are not frickin’ groomsmen! That’s why she can’t be in the goddamn wedding!”

As Anne Ashburn walked in the back door of the shotgun apartment, that happy little explosion was not only what she’d expected all along, it also offered her the out she’d been praying for. And it was probably the one and only time she was ever going to agree with the bride.

Not about the role of females in bridal parties, but that Anne wasn’t going to be in the “goddamn wedding.”

Everyone standing in the kitchen turned and looked at her: Deandra Cox, the impending wearer of the white dress; Robert “Moose” Miller, her exhausted fiancé and Anne’s fellow crew member down at the 499 fi rehouse; and . . . Dannyboy Maguire.

Who was the only one she really noticed and, for that reason, the person she refused to look at.

Too bad Danny always made an impression. Like most firefighters, he was in great physical shape, his big body thickly muscled and ready to snap into motion in an instant. With his heavy arms linked over that chest and his long legs crossed at the boots, he was leaning back against the chipped countertop, his too-blue stare missing nothing. He was fresh from a shower, his glossy black hair wet, and Anne tried not to picture him naked under the spray, his tattooed torso arching as he rinsed the shampoo out of his—

She put her hands up to stop herself as much as the argument. “Look, I don’t want to cause any problems. I’m happy to step aside—”

“And now I have one too many bridesmaids.” The bride-to-be refocused on her intended. “My count is wrong. You wait until two days before the wedding to tell me this when you know I’m not going to like it, and now my count is off!”

As the groom focused on the linoleum floor, it was impossible not to picture a wax version of the couple on a multi-tiered cake: Deandra in skinny jeans and that tight cashmere sweater, her dark hair streaked blond, her body cocked forward like she was going to throat-punch the man she was going to marry; Moose in his New Brunswick Fire Department T-shirt, all broad-shouldered and bearded around the face, easing back like someone with the flu was about to sneeze in his face.

“I didn’t think it was a big deal,” Moose muttered. “Anne’s a member of the four-nine-nine crew, and everyone else is with me.”

“She’s a girl.” Deandra pointed at Anne. “It throws off everything.”

“I really don’t want to cause any problems.” Anne put her hands up again. “So I’ll just be in the congregation. It’s perfectly fine—”

Deandra’s glare swung Anne’s way. “The count is still wrong. And my friends have already paid for their dresses. They were a hundred and twenty dollars apiece.”

And that’s my cue to go, Anne thought. Moose may have volunteered for this, but no one else had or needed to—

“I think women can be whatever they want.”

As Danny spoke up, everyone looked at him—including Anne, who suddenly felt shades of what Deandra was throwing out.

Don’t you dare, she mouthed at him behind the bride’s back.

Danny just shrugged like he’d thrown on a pantsuit and was channeling Oprah, Michelle Obama, and Hillary Clinton all at once. “I mean, Deandra, you’re above all that sexism, aren’t you? No one’s going to tell you what’s right and wrong for your own wedding. You’re more secure than that.”

I am going to kill you, Anne vowed. “I think Deandra wants things done properly for her only wedding.”

Danny frowned in pseudo-confusion. “So you’re saying it’s okay to have a double standard for men and women? That’s a shocker given how you are at the station. I thought you believed in equality.”

“I do,” Anne snapped. “But this isn’t about equality.”

“You sure? I don’t know how you can support traditional gender roles when it comes to a wedding ceremony at the same time you defend the right for women to be firefighters, cops, and on the front lines in the military.”

“Spare me someone who’s never been in a dress having an opinion about women’s issues, okay?”

“I’m just pointing out that you don’t want women out of dresses.”

“It’s her wedding.” Anne jabbed a finger at Deandra. “She’s the bride. She gets to say what’s right and wrong for her, and she does not need some man telling her what to do.”

“Even if I’m defending the rights of women?”

“Until you grow a set of ovaries, you can shut the hell up about our rights!”

As Anne’s voice ricocheted around the kitchen, she realized that she’d marched right up to Danny—and that Deandra and Moose were watching the two of them in total stillness.

She cleared her throat and took a step back. “Anyway, Deandra’s made up her mind. And I support her decision.”

Deandra’s eyes narrowed on Danny, and something about the way the woman looked at him didn’t seem right.

“Actually,” the bride said, “maybe she should be in the wedding party.”

Anne prayed her expression stayed neutral. “Don’t compromise your vision on my account.”

“I won’t.” The woman stared at Danny. “Fine. Let’s put her in a tuxedo like the rest of the men. She can walk my sister down the aisle, just like a man should. Her shoulders are too big for a gown, anyway, and that way my count stays the way it should.”

Anne rolled her eyes. Let’s hear it for girl power.

“So it’s settled,” Deandra said with a tight smile. “You need a tux. Unless you already own one.”

For a moment, Anne waited for somebody to argue with the woman. Like Moose. But he was clearly done falling on swords over the wedding details, and Danny had just gotten what he wanted so he wasn’t going to say a damn thing.

And the truth was, after how many years of fighting fires with these men, they were her brothers in all but blood. Even though she thought Moose had lost his ever-loving mind marrying this beautiful but sour woman after knowing her for a matter of months, Anne was still going to stand up for the guy if he wanted her to—and he did. He’d asked her down at the stationhouse specifically.

“Where did you guys rent your suits?” Anne said to him.

The groom blinked like he’d forgotten how to speak English. Then again, he’d been doing that a lot at the firehouse lately. “You’re actually going to wear one?”

“Yes, she is wearing one,” Deandra cut in.

Danny spoke up. “I’ll go with you. I know where the place is.”

One-clicked them all, thanks for posting.

Can’t wait to read this series!! Love me some JR WARD!! Shared on all my socials!!

Looking forward to reading it

Throw Back the Covers (60): Sunday Post & Stacking the Shelves - Under the Covers Book Blog