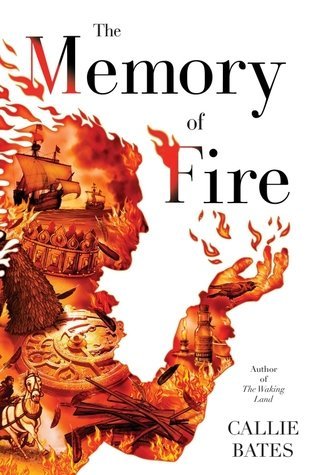 The Memory of Fire
by Callie Bates

“Truth be told, I enjoyed Jahan’s POV more than Elanna’s” ~ Under the Covers

The story took off shortly after the last book had ended.  Although Elena was successful in leading her people of Caeris and Eren, sorcery is still against the law across the lands. Most especially in Paladis where she hopes to have a peace treaty with. But it has been decided that it will be Jahan who will attempt at being the peacemaker.  The biggest hurdle is that sorcery is still outlawed and harsh punishments are given out to those who practice magic.

I automatically picked up this book without reading the blurb simply because I enjoyed the last instalment. So, I was surprised to find out that The Memory of Fire is in Jahan’s POV.  Not necessarily a bad thing. It was actually a pleasant surprise. Truth be told, I enjoyed Jahan’s POV more than Elanna’s. I enjoyed hearing his points of view, his past, and his hidden powers.  He truly took the spotlight and won my heart over.

Bates did a good job making this book even more interesting than the last instalment.  It was full of betrayals, secret powers, and finding long lost families. I especially enjoyed the rebellion against the emperor and witch hunters.  There’s something about defeating evil and seeing what they deserve.

My only complaint is that the first 20% was slow for me and it took me a bit to remember this world but that could’ve been on me.  I also wish the romance was a bit stronger. Overall, it was a good read. I’m excited to see what Ms Bates has installed for her readers.

Callie Bates is a writer, harpist and certified harp therapist, sometimes artist, and nature nerd. When she’s not creating, she’s hitting the trails or streets and exploring new places. Her debut fantasy novel, THE WAKING LAND, is forthcoming from Del Rey Books in 2017.

Awesome review angela!! Love this cover too!! On my tbr gr list!! Shared on all my socials!!

Thanks for the review, I enjoyed the first book and will be adding this to my wishlist.