We are beyond excited today to have a fun look at the work behind a cover design AND show you the brand new cover in Jenny Holiday’s Bridesmaids Behaving Badly series.  The covers for this series are like the perfect romantic comedy and we adore them.  The new one definitely has us itching to get to read it.  Now let’s take a moment to enjoy this unique behind the scenes look at the making of the cover for THREE LITTLE WORDS.  A big thank you to Jenny Holiday, Lexi Smail, Elizabeth Stokes and Tim Rogan for taking the time and sharing with us today this fun glimpse behind the camera.

What was the initial inspiration for the Bridesmaids Behaving Badly series and what were you looking to capture for THREE LITTLE WORDS in particular?

Jenny Holiday, Author: The vision I had in my head when I thought of my ideal cover was a fun, flirty, rom-com type image where you could tell immediately that you were looking at a bridesmaid. There aren’t a lot of books out there that show bridesmaids on the cover as opposed to brides; we learned this when we went searching for comparables.

Three Little Words is the third book in the series, so we had already established the look and feel. Beyond that it was models that captured the look and personality of the characters and a hint of a beach setting where the wedding in the book takes place.

Lexi Smail, Editor: We wanted to keep the same fun and flirty vibe from the first two books, but we also wanted Three Little Words to stand on its own. We thought up new pose ideas and made sure the dress and background were different from the first two books. But our biggest goal was to capture a genuinely fun moment between the models. We want to make sure they look like a real couple in love!

What goes into the decision to coordinate a photo shoot instead of using stock photos?

Elizabeth Stokes, Art Director: What’s most important is that we project the “feel” of the series. Everything after that is just logistics. At first, I looked at stock art – but no one takes stock shots of bridesmaids and groomsmen; the photographer is always focused on the bride and groom! With a photoshoot, we could closely cast our models to the character description. So it’s a win – win! 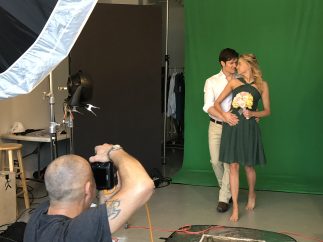 Picture it: It’s a rainy and cold day in February but inside, Claudio Marinesco’s studio is channeling a romantic scene on a Florida beach. (Note from Jenny’s publicist: I was sweltering in a big sweater so the tropical feeling was definitely there.)

How do you prep for this kind of shoot?

Lexi: I bring printouts that include a brief summary of the book, wardrobe descriptions, pose and prop ideas, previous covers in the series, and celebrity photo inspiration of what the characters look like. (In Three Little Words, our hero’s looks are based on Rob Lowe (think Sam Seaborn/West Wing era) and our heroine is based on Cara Delevingne.) I give these printouts to the models and fill them in on the backstory of the character they’re about the play. It definitely helps the models settle into the shoot.

Elizabeth: Lots of caffeine and prepping the models for my “Art Director Stare”. It’s a never-ending list of checks to ensure the best selection of shots and the least work after the shoot. Is her hair too curly, not curled enough? Is she too short? Too tall? Do we need to put him on a box so he still looks taller? Are all the clothes steamed? Does his shirt fit just right? Does it need to be cinched at the back to show off his muscles? (Answer: always!) 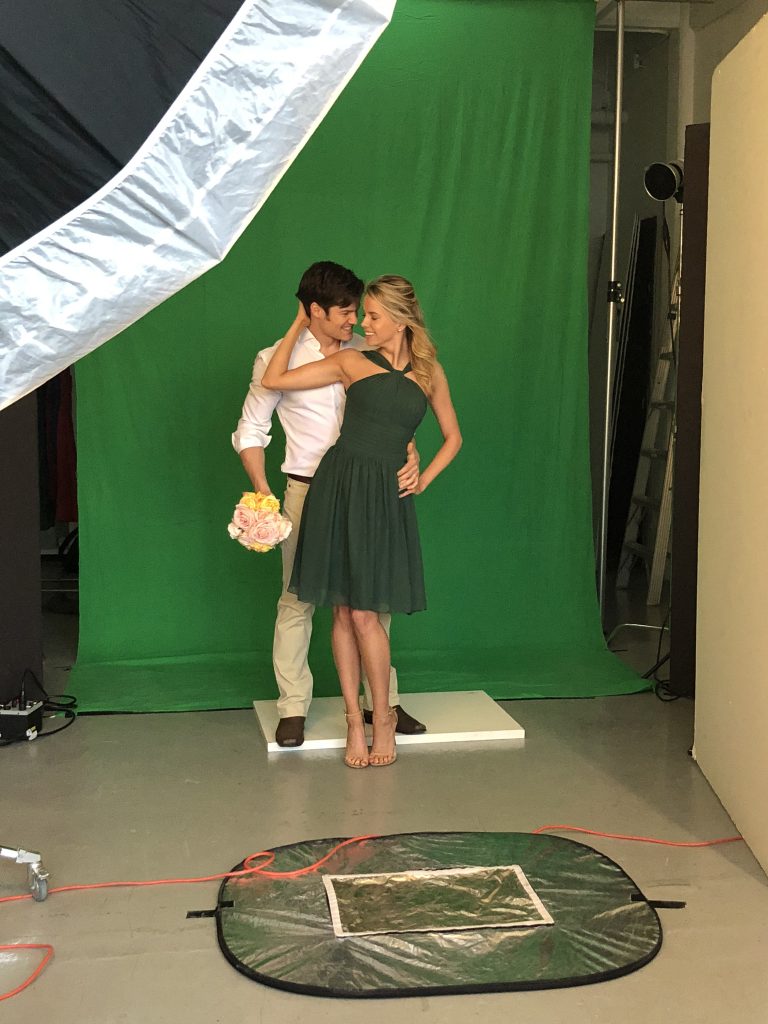 Jenny, what is it like to get updates from the shoot from the Forever team — in real time?

It’s great! I used to work as a managing editor for various publications at a big university, and I’d sometimes have to supervise photo shoots. So the components—the green screen, the constant fussing with clothes and details—are familiar to me. It might be counterintuitive, but I think this made it extra wild see “my” characters in this familiar setting. It’s one thing to write an article about cancer research, for example, and then take a picture of the researcher. But to suddenly see these fictional people you know so well represented as actual embodied people is surprisingly emotional. When they were shooting the first book and Lexi sent me the first shots, I gasped. They looked so much like these people who had lived in my head for so long that it was honestly a little overwhelming!

Let’s get real. The models, who just met on the day of the shoot, need to convince everyone they are falling in love. What’s the best practice for ensuring chemistry?

Elizabeth: Give them time to get acquainted. The first 20 minutes of the shoot aren’t going to be the final shot because the models are still getting to know how to move with each other (i.e. where his hand lands on her waist, how her arms wrap around his neck). It’s a process that’s helped by our photographer Claudio Marinesco doing some fun “in-character” exercises with the couple. Like slow-dancing, walking hand-in-hand, and him lifting her up in the air. It builds rapport so everyone on set relaxes and starts laughing and having fun… and THAT’S when the magic happens. 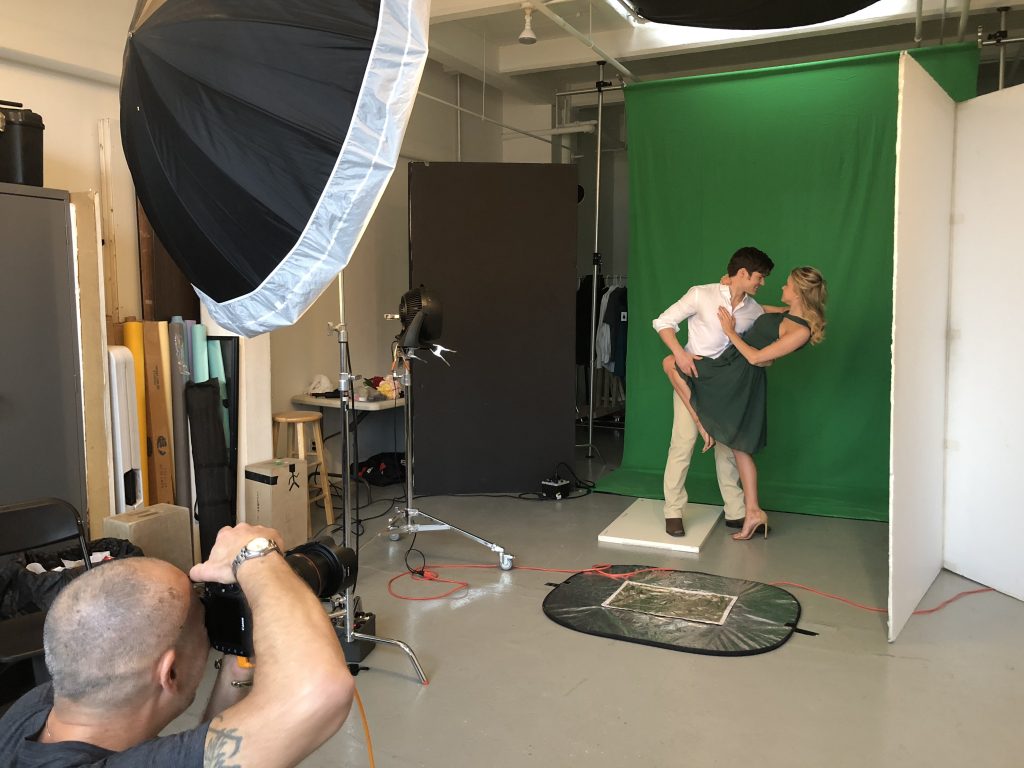 And now a word from our cover model, Tim Rogan:

What’s the biggest challenge in hopping into this kind of job without having read the manuscript?

When you aren’t allowed to know a detailed plot of the book, we need to be able to improvise and come up with as many possible options for the creative team as possible. If you are willing to play along, and sometimes get silly, it will make everything run much smoother. Also, when you are genuinely having fun on set, the camera will pick that up, and it will make the shots look even better.

Find out more about him here! 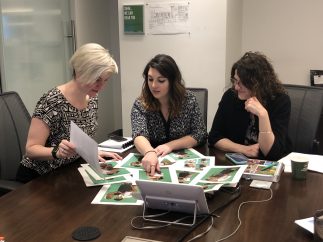 After the photographer narrows down 500 photos to 150, Elizabeth selects 30-40 ‘finalists’ to bring into a cover meeting with the entire Forever editorial staff. What happens in one of these top secret meetings? What details are you discussing to get closer to a final product?

Lexi: For Three Little Words, it was a bit easier because we knew exactly what we were—and weren’t—looking for at this point in the series. If a pose is too similar to previous covers in the series we nix it. At the same time we’re looking at the dynamic between the models. Do they look like they’re having fun? Do they look like they’re in love? Do they both look pretty/happy/comfortable? You have to remember that these are models so they never look bad, but it’s sometimes tough to get one image that captures the best of everything.

But, seriously, how do you narrow it down?!

Elizabeth: Once it’s down to the top ten any little off-thing becomes a big deal. Really, any of these top 10 images would make a great cover and a lot of the time the final choice is a gut-instinct decision of which shot makes you say, “I have to read their story!”

Lexi: As Elizabeth said, we start to get really picky! Sometimes it’s obvious which image is the best and sometimes we pick our favorite two and ask Elizabeth to work her magic so we can see the shots in the cover layout. For Three Little Words we all loved this pose and it ended up being the only image that Elizabeth mocked-up. 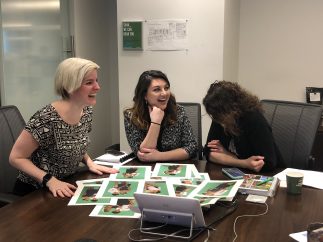 Jenny, what was your immediate reaction to seeing the final picks for the cover? What kind of feedback did you have for the crew?

For all the shoots, my feedback was pretty much limited to heart-eyes emojis. Really. I thought they did a fantastic job with all three covers.

One thing I thought was interesting about all the covers in this series was the work that went into creating backgrounds; we talk a lot about the photo shoots, but the models are shot against a green screen and later put against backgrounds. The backgrounds are subtle enough that they don’t distract from the couples, but in each case, the setting for the wedding is evoked. For Three Little Words, that’s the beach. I loved the golden sunset behind them. And I think the dappled backgrounds go a long way toward making the three books hang together visually as a series.

Lexi: This is such a fun series and I’m thrilled that Jenny and the entire Forever team were able to come together to help create these beautiful covers.

Elizabeth: I’m so proud to be the Art Director of this series. It has been such a joy to create, the shoots were such fun, and the final covers each look like a fresh, fun rom-com movie coming to a theater near you!

Jenny: I adore these covers. I have them as the screensaver on my computer so I can gaze on them all the time. The best covers bring to life the characters and the mood of a book, and that’s exactly what’s happening here!

And finally… the cover you’ve been waiting to see! 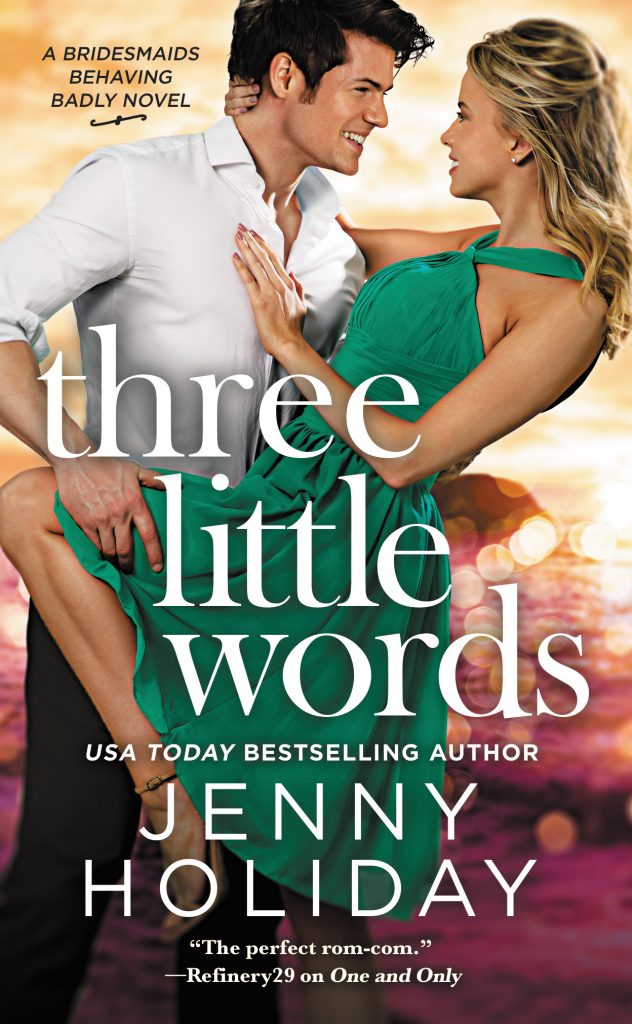 Gia Gallo is officially in bridesmaid hell. Stranded in New York with her best friend’s wedding dress, Gia has six days to make it to Florida in time for the ceremony. And oh-so-charming best man Bennett Buchanan has taken the last available rental car. Looks like she’s in for one long road trip with the sexiest – and most irritating – Southern gentleman she’s ever met…

Bennett’s pretty sure that if there was ever a woman to break his “no flings” rule, Gia would be it. Sure, she’s stubborn. She’s also funny, smart, and the attraction between them is getting hotter with every state line they cross. While Bennett doesn’t do casual, Gia doesn’t do “relationships.” But if they break the rules, this unlikely pair might discover that their impromptu road trip could turn out to be the best ride of their lives.

Jenny Holiday is a USA Today bestselling author who started writing at age nine when her awesome fourth-grade teacher gave her a notebook and told her to start writing some stories. After a detour to get a PhD in geography, she worked as a professional writer, producing everything from speeches to magazine articles. Later, her tastes having evolved from alien invasions to happily-ever-afters, she tried her hand at romance. She lives in London, Ontario, with her family.

Wow! Thanks for all the inside scoop/details about all that goes in to making these covers… they really turned out well.

Awesome cover reveal!!! Love the behind the scenes,so cool!!! Shared on all my socials!!