He’s completely rugged and wayward, but his badass look isn’t staged—he is the epitome of what every bad boy strives to become when they grow up. He always has been. I lick my suddenly dry lips, and London follows the movement with a smirk.

The air is charged with an undeniable pull and so is every part of my body. The rational part of me is screaming to get up and go, and forget I ever met this man, but the part I’ve kept under lock and key for ten years demands vengeance and believes it’s time to settle the score.

Throwing back the remainder of my beer, I slide across the booth and straighten out my skirt with no real hurry to my step. London never wavers from me, watching with interest as I stand, my chest rising and falling, the adrenaline punching a hole straight through me.

Taking a deep breath, I walk toward him, my pace measured, my head held high. He shifts to stand taller but still doesn’t move an inch. He draws a glass to his lips, his Adam’s apple bopping as the brown liquid slides down his throat. I keep stalking toward him because the hunter has just become the prey.

People somehow move when they see me coming, probably sensing World War Three is seconds from erupting and they don’t want to be anywhere near me when it does. I gently push past a couple, who look up at me and then back at London. They instantly huddle off to the side, ready for the smackdown from hell.

The moment I’m a few steps away, his familiar fragrance of warm cinnamon and trouble whacks straight into me, cementing me to the spot. I have waited so very long for this moment. I’ve dreamed of it often. But our reunion would never be a happy one.

London Sinclair didn’t just break my heart; he fucking set it on fire and threw the ashes to the wind. I loved him, and in return, he danced on my grave.

The music blaring around me and the throbbing memories animate me, and I take one step, then two, until we’re inches apart. My heels give me some leverage, but he still towers over me. Looking up at him, I quash down the urge to caress his face to ensure he’s real.

He’s changed so much, yet he’s still the same.

I examine every curve of his face, marveling at the vastness of his blue eyes. He allows me to visually molest him, standing coolly, not caring that we’re in everyone’s way.

I want to say so many things, but where do I start?

But London and I, we were never good with words. And now is no exception.

Reaching for the glass which sits loosely in his fingers, I pay no attention to the absolute yearning I feel when my thumb brushes over his. Drawing the glass to my lips, I toss back the bitter contents, the burn welcomed because I need the pain to remind me that this man will only be able to offer me that.

He watches my every move, that fucking smile still tugging at his lips. I wonder just how many times he smiled when thinking about what he did. He won…well, I hope it was worth it.

With a slow, calculated speed, I lean forward, purposely pressing my body into his as I place the empty glass on the bar behind him. A small victory for me when he hisses low.

But I intend on finally taking back what’s mine.

He opens his mouth, no doubt ready to say some smartass remark or rub salt in the still raw wounds, but I’m done. I’m done with him, and I’m done with this constant need to seek him out in a crowd.

This is goodbye for good.

Years of anger explode from me, and before I can question myself and the repercussions of my actions, I raise my hand and slap that smug smile from his face. The whack can be heard above the rock music, but the sting in my hand is worth it because it can never compare to the pain he’s caused me.

His head snaps back as he cups his reddening cheek, but when he meets my eyes, nostrils flared, breaths heavy, he nods once.

Absinthe of the Heart
by Monica James

Released: May 14 2018
Series: Sins of the Heart #1
Published by Self Published

Two households, unlike in dignity, in the City of Angels is where we lay our scene...

London Sinclair was the boy my mother warned me about for as long as I can remember. His name alone has brought my family nothing but shame and suffering, so it’s no surprise we’ve been sworn enemies since the first moment we met.

With his bedroom eyes and cocky smile, he has all the girls under his spell. I have one more year of school left, and then I’m home free because I’m guarding a secret, one I’m ashamed to keep.

The boy who is completely off-limits is the one who drives me, Holland Brooks, wild. I want London, and I think…he wants me, too.

Some may compare it to a Shakespearian tragedy, as our surnames have fated our future, but when a single night changes my life forever, I can’t leave the City of Angels fast enough.

Ten years later, I have atoned for my sins and return to Los Angeles a changed woman. I’ve come home to get married. But the moment London walks back into my life, one thing is clear. Ten years can’t undo that night—that single, sinful night when I gave into temptation—because I want to do it again. 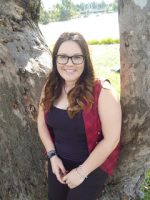 When she is not writing, Monica is busy running her own business, but she always finds a balance between the two. She enjoys writing honest, heartfelt, and turbulent stories, hoping to leave an imprint on her readers. Her inspiration comes from every day life.

She is a bestselling author in the US, Australia, Canada, and the UK.

Monica James resides in Melbourne, Australia, with her wonderful family, and menagerie of animals. She is slightly obsessed with cats, chucks and lip gloss, and secretly wishes she was a ninja on the weekends.

great author override!! on my tbr goodreads list!! shared on all my socials!

Wow…that was an awesome excerpt!

Oh, hell, yeah! I will be getting this now. Thank you for the override. Woot!