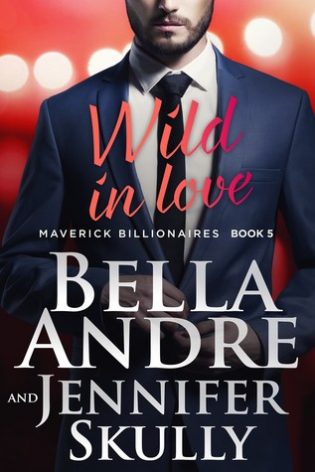 Wild in Love
by Bella Andre

“I thought that they were a really cute pair but for some reason, this book lacked that connection for me.”
~ Under the Covers

WILD IN LOVE is book five in the Maverick Billionaire series. This is Daniel’s book and he’s the last one of the bunch who hasn’t found his happily ever after. I understand Daniel’s need to feel loved so I was curious to see who Andre and Skully would pair him up with.

Tasha turned out to be a fun gal. Although her past holds quite a lot of drama, none of it is her fault. So she escapes to the mountains for some reprieve and this is where she meets Daniel. I liked their romance. I thought that they were a really cute pair but for some reason, this book lacked that connection for me. The characters were nice and friendly, but I just didn’t fall deep in love with them. I wasn’t the biggest fan of Tasha’s dilemma so I guess maybe that influenced how I felt about her. But like I said, what happened to her was someone else’s fault entirely. I guess I was expecting more from this couple because I was looking forward to it.

WILD IN LOVE is a very quick read. I read it in one sitting and that’s one of my favorite things about this series. It’s fun and upbeat, making it a treat to read.

Awesome review annie!!! I have some of this series on my tbr gr list!! Shared on all my socials!!

I’m a little behind on this series. I’m sorry this one didn’t quite live up to your expectations. I am curious about the issues Tasha has now.

I’m a little behind on this series. I’m sorry this one didn’t quite live up to your expectations. I am curious about the issues Tasha has now.

Awesome review annie!!! I have some of this series on my tbr gr list!! Shared on all my socials!!