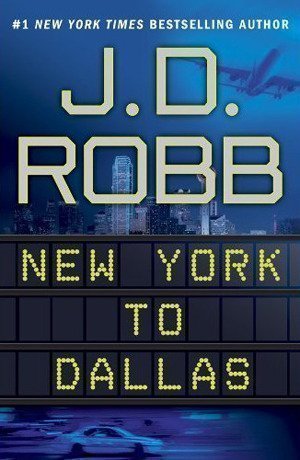 “This book is by far the most intense book in the series.”
~ Under the Covers

NEW YORK TO DALLAS is book 33 in the In Death series and it is by far the most intense one of the series. When Eve was just a rookie, she had an encounter with Isaac McQueen, a man who was a murderer and pedophile. When McQueen escapes prison and returns to his apartment again, seeking Eve out, she has no choice but to return to her past. The pages of this book are super intense and I had the creepy crawly feelings all throughout as I read it. There was something very scary and disgusting about McQueen that I really, really hated and as a result, he made for a very good villain.

Like I mentioned before, this book is by far the most intense book in the series. With it’s fast-paced writing and roller-coaster emotions, be sure to clear the rest of your schedule when you read this book. I read it quickly, drawn in by the writing and the intense mystery plot. I tend to have a lot of favorite books in this series, but I would definitely say that this particular one is probably in my top two. I’m so glad that I got a physical personalized copy because it will definitely be a prize possession displayed on my bookshelves.

I’ve only read the first 7, and I cannot wait to (someday) read this

Awesome review annie!! Shared on all my socials!!

Great review! I’m so excited about this one!

Great review! I’m so excited about this one!

Awesome review annie!! Shared on all my socials!!

I’ve only read the first 7, and I cannot wait to (someday) read this