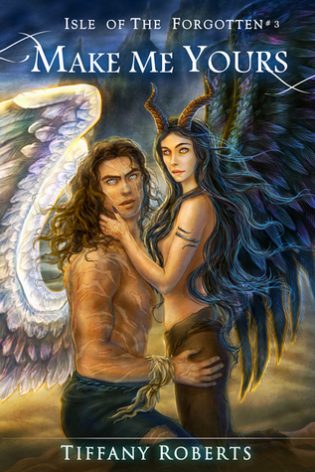 Make Me Yours
by Tiffany Roberts

Gaelin is now free to leave the Isle of the Forgotten whenever he chooses. But he doesn’t. He knows he must wait on the island, he just doesn’t know for what. He just hopes whatever it is will bring him what he longs for…peace. Mayra and her twin brother have been sent to the Isle of the Forgotten, but she knows they won’t be there long. The man who has been controlling them will surely come for them as he needs them to carry out his nefarious plans. For now though, even though she is imprisoned on the island Mayra is free. When Gaelin sees Mayra he finally finds what he has been looking for, until he realises she is a demon, the race he has been battling for millennia. However, Mayra is his mate and if he wants to find peace they must both overcome their inner demons.

Gaelin’s character has intrigued me since he first appeared in the series and I was excited to start his book. I wanted to know who he was waiting for as well as learn a little bit more about angels. The last thing Gaelin thought he needed was a demon mate when he’d spent the last few millennia battling them, so his initial dismay at discovering that Mayra was who he was waiting for was understandable. What I liked was that although Roberts describes their struggle with who fate has chosen for them that the whole book wasn’t taken up by them bemoaning the choice.

I enjoyed the romance between them as they both reveal painful pasts that makes them rethink their view of the world. It was also interesting to see Gaelin struggle with his own past deeds which were just as monstrous as any demons and come to grips with his own prejudices. Together they made a great pair with an intense romance that made them both look a little deeper.

The action also continued with this book as the Justicars, as well as Morthanion make another appearance on the island. I can’t wait to see what will happen next and where the series will go. The Roberts team have written not only a good romance, but a good fantasy world as well.

If you like a fantasy romance or even a paranormal romance than you need to give this series a try, it is full of sexy romances with strong heroes and heroines and a new fantasy world to dive in to.

I am reading and enjoying make me burn right now!

Sounds good, thanks for sharing your thoughts Suzanne

Sounds good, thanks for sharing your thoughts Suzanne

I am reading and enjoying make me burn right now!