The Elizas
by Sara Shepard

When debut novelist Eliza Fontaine is found at the bottom of a hotel pool, her family at first assumes that it’s just another failed suicide attempt. But Eliza swears she was pushed, and her rescuer is the only witness.

Desperate to find out who attacked her, Eliza takes it upon herself to investigate. But as the publication date for her novel draws closer, Eliza finds more questions than answers. Like why are her editor, agent, and family mixing up events from her novel with events from her life? Her novel is completely fictional, isn’t it?

The deeper Eliza goes into her investigation while struggling with memory loss, the closer her life starts to resemble her novel until the line between reality and fiction starts to blur and she can no longer tell where her protagonist’s life ends and hers begins.

I’m going for something completely non-romance this month! I went into The Elizas thinking it was some kind of thriller, with a stalker/killer that only the heroine knew about. In some ways it was the exact opposite of that! But I am not going to say anymore as it will spoil it. This was an intense psychological mystery where nothing was quite as it seemed and the deeper you get into it the more strange it seems. If you are in the mood for something a little different this month you need to give it a try. 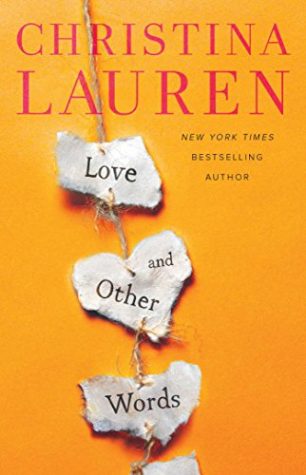 Love and Other Words
by Christina Lauren

The heart may hide, but it never forgets.

Macy Sorensen is settling into an ambitious if emotionally tepid routine: work hard as a new pediatrics resident, plan her wedding to an older, financially secure man, keep her head down and heart tucked away.

But when she runs into Elliot Petropoulos—the first and only love of her life—the careful bubble she’s constructed begins to dissolve. Once upon a time, Elliot was Macy’s entire world—growing from her gangly teen friend into the man who coaxed her heart open again after the loss of her mother…only to break it on the very night he declared his love for her.

Told in alternating timelines between Then and Now, teenage Elliot and Macy grow from friends to much more—spending weekends and lazy summers together in a house outside of San Francisco reading books, sharing favorite words, and talking through their growing pains and triumphs. As adults, they have become strangers to one another until their chance reunion. Although their memories are obscured by the agony of what happened that night so many years ago, Elliot will come to understand the truth behind Macy’s decade-long silence, and will have to overcome the past and himself to revive her faith in the possibility of an all-consuming love.

I was probably one of the few people that hadn’t jumped on the Christina Lauren bandwagon, but something about this book kept calling to me to read it so I picked it up.  Honestly, having mixed feelings about reading it because I had sort of thought their style of writing wasn’t so much for me.  But that goes to show to never say never!  I actually really found this story to be sweet and charming.  It’s being marketed as a women’s fiction novel but I think it’s got a big dose of romance to it, so don’t fear about that.  It is a second chance romance and the story of two childhood best friends who got each other through some of the tough teenage years and were supposed to be together forever, but then life happened and things didn’t go as planned.  It’s a simple story at its core, but it’s told in a way that was very engaging.  I can’t really give you a comparison to their other works but it’s not so much a funny story, it’s got a lot of heart and some emotional situations as well.  Some angst but not over the top.  I think it was just the right amount and blend of everything that kept me riveted to find out what would happen, and what HAD happened in their past.  Overall, it was a great read and an enjoyable first experience for me with this author.

Wedding bells and death knells are ringing for the Fairy Tale Cupcake crew in this latest mystery in the New York Times bestselling series
With Angie and Tate's wedding just around the corner, it's a happy--but very busy--time for Mel. Not only is she doing double duty as both the maid of honor and best man, but her bakery, Fairy Tale Cupcakes, has just been hired to provide cupcakes for a famous author's book signing. But when the author turns up dead, it's just the start of a murder mystery that Mel must solve.

This month we lucky readers get a new instalment in the Cupcake Barkery series by Jenn McKinlay. Since this is book ten in the series, it’s probably best to read the series in order. The main reason why is say this is because one of the main characters of the series is getting married in it so it won’t have the same impact if you aren’t familiar with the characters. This book contains a lot of fun mystery but also a lot of heartwarming moments as well. I think if you’re a fan of Romance and want to try a Cozy Mystery out, this series might be just the thing for you. It has plenty of upbeat personality to charm your pants off. 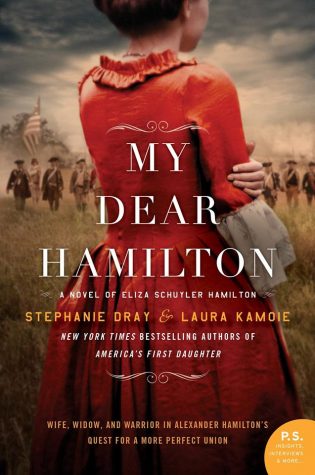 Wife, Widow, and Warrior in Alexander Hamilton’s Quest to Form a More Perfect Union
From the New York Times bestselling authors of America’s First Daughter comes the epic story of Eliza Schuyler Hamilton—a revolutionary woman who, like her new nation, struggled to define herself in the wake of war, betrayal, and tragedy. Haunting, moving, and beautifully written, Dray and Kamoie used thousands of letters and original sources to tell Eliza’s story as it’s never been told before—not just as the wronged wife at the center of a political sex scandal—but also as a founding mother who shaped an American legacy in her own right.
A general’s daughter…
Coming of age on the perilous frontier of revolutionary New York, Elizabeth Schuyler champions the fight for independence. And when she meets Alexander Hamilton, Washington’s penniless but passionate aide-de-camp, she’s captivated by the young officer’s charisma and brilliance. They fall in love, despite Hamilton’s bastard birth and the uncertainties of war.
A founding father’s wife...
But the union they create—in their marriage and the new nation—is far from perfect. From glittering inaugural balls to bloody street riots, the Hamiltons are at the center of it all—including the political treachery of America’s first sex scandal, which forces Eliza to struggle through heartbreak and betrayal to find forgiveness.
The last surviving light of the Revolution…
When a duel destroys Eliza’s hard-won peace, the grieving widow fights her husband’s enemies to preserve Alexander’s legacy. But long-buried secrets threaten everything Eliza believes about her marriage and her own legacy. Questioning her tireless devotion to the man and country that have broken her heart, she’s left with one last battle—to understand the flawed man she married and imperfect union he could never have created without her…

I just finished My Dear Hamilton by Laura Kamoie and Stephanie Dray, and I was nothing but enthralled.  Kamoie and Dray did an amazing job portraying Eliza Hamilton’s story.  It’s even a better read than their last Historical Fiction, America’s First daughter.  I just hope these duo keep writing more untold stories of the women in our history.  PreOrder now! This is out on April 3rd, 2018.

Wow the elizas sounds like a page turner! My dear hamilton seems intriguing as well. Thanks!

Some awesome recommendations ladies!!! My Dear Hamilton sounds awesome!! Shared on all my socials!!!

I’m curious about The Elizas. I still need to try Christina Lauren and Laura and Stephanie. Looks like another good cozy, too.

I’m curious about The Elizas. I still need to try Christina Lauren and Laura and Stephanie. Looks like another good cozy, too.

Some awesome recommendations ladies!!! My Dear Hamilton sounds awesome!! Shared on all my socials!!!

Wow the elizas sounds like a page turner! My dear hamilton seems intriguing as well. Thanks!