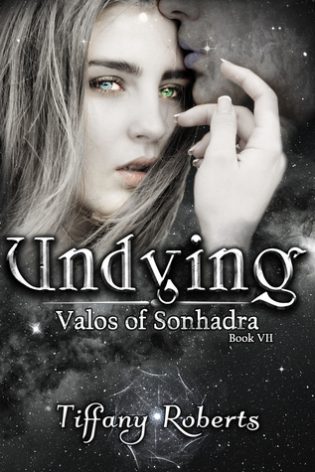 Wins the Award for Best Superpower of the Series

When you can’t die why not hook up with death? Or at least the valos who kills everything he touches…apart from her. Orishok is the last in his race and is the caretaker of his now dead race and their city. His touch is death to everyone but Quinn the female who stumbled into his city. Undying gives us another sweet and sexy romance as Quinn and Orishok fall in love and find a very delicious use for the bath house.

Overall thoughts: Another good instalment into the series

Wins the Award for Most Heart Wrenching of the Series

Although Shadowed was my favourite, Enduring was a really really close second. In fact I would say they were almost equal, it must be something about valos associated with stone! Zoya finds herself being looked after by two valos, Rock and Vlunn. She is helplessly attracted to them, despite their alien appearance and won over by their kindness. The only problem being that Vlunn and Rock are already in a relationship with one another. The other issue: they’re dying. The book had me wiping away a few tears and needing a fan to cool down. Vlunn and Rock were hot together and this was the only book in the series where the males were in a sexual relationship with each other as well as the heroine. I won’t be spoiling this much when I tell you this has a happy ending, but, even though I knew that would happen, it was still an emotional read.

Overall thoughts: Adored this book! Not only was it sexy, but it was imbued with plenty of emotional ups and downs.

Wins the Award for Most Heroic Heroine in the Series

Unfrozen is the closing chapter in this series and I am sad to see the end of it! It’s been a good series full of different types of alien men and women with some interesting abilities. Lydia has one of my favourite abilities, she can change her body temperature so she is either freezing or burning hot. Which comes in handy when she has to save a whole race of valos by racing over a river of lava. That’s pretty kick ass. The romance between Lydia and Kai, an ice valos, was cute, not as hot as some of the other books, but I loved seeing their relationship grow.

Overall thoughts: This was a nice note to end the series on and gave me yet another author to check out.

These sounds so good. Thanks for the review!

Awesome review suzanne!! Have this whole series on my tbr gr list!! Shared on all my socials!!

These sounds so good. Thanks for the review!

Awesome review suzanne!! Have this whole series on my tbr gr list!! Shared on all my socials!!