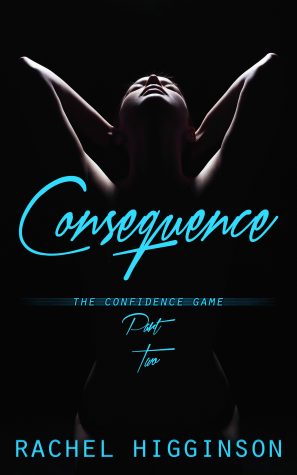 Released: February 27 2018
Series: The Confidence Game #2
Published by Self Published

Consequence, the conclusion to Sayer and Caroline’s epic love story

Five years ago, I escaped a dangerous life I had always wanted to leave. I got away. I found freedom. But it cost me the love of my life.

For five years I lived in hiding, protecting my most valuable secret while Sayer Wesley sat in prison paying for both our sins. I promised to love him forever. I promised to never leave him.

I broke my promises.

Five months ago Sayer found me.

Five weeks ago, I was forced to face my past.

Five days ago, someone took my daughter. They kidnapped her in order to make Sayer and me suffer. I will do anything to get her back. Even if that means coming clean to Sayer, letting him into my life and introducing him to our daughter.

Fifteen years ago, I fell in love with Sayer Wesley. Now I must pay the consequences for falling in love with a con man.

I was born and raised in Nebraska, but spent my college years traveling the world. I fell in love with Eastern Europe, Paris, Indian Food and the beautiful beaches of Sri Lanka. But I came back home to marry my high school sweetheart and now I spend my days raising our growing family. In those few spare moments I have, I am either reading or writing Young Adult Fiction, because I am obsessed with it.

Thanks for the extra details.

Great author override!! Sounds like a great read!! Shared on all my socials!!

Love all the details! I can’t wait to read this duet!

I enjoy books set in Colorado

Thanks for the extra details.

Great author override!! Sounds like a great read!! Shared on all my socials!!

I enjoy books set in Colorado

Love all the details! I can’t wait to read this duet!

ARC Review: Secret at Skull House by Josh Lanyon
May 26, 2020 by Amy R
Thanks for the review.

ARC Review: The Tourist Attraction by Sarah Morgenthaler
May 26, 2020 by Amy R
Thanks for the review, I am DNF’ing more.

ARC Review: Beachside Beginnings by Sheila Roberts
May 26, 2020 by Amy R
Thanks for the review.