We have a treat for you guys!  If you are anything like us, you love your sports romances and a big part of that are hockey romances.  Rachel Gibson started this obsession with hockey players and Lia Riley is the newest author to dive into the sexy athletes.  We have both authors chatting here today!

Lia Riley: The upcoming book in the Chinook series is The Art of Running in Heels, and stars a reality wedding runaway bride (who just so happens to be the daughter of the Chinook’s head coach) and has my own personal catnip trope…a fake relationship­–yay! What was your inspiration for the plot?

Rachel Gibson: The first book I published twenty years ago, Simply Irresistible, is the inspiration for the new book, The Art of Running in Heels. In Simply Irresistible, I combined my two favorite plots: runaway bride and secret baby. The heroine of The Art of Running in Heels, Lexie Kowalsky, is that secret baby. She is now twenty-seven. I thought it would be interesting if history repeated itself, sort of a runaway bride of a runaway bride plot.

LR: Do you have a favorite quote from the book that you can share (without being too spoiler-y?)

RG: “Our kids will have bad toes and mullets!” She moaned. “But I have to marry him.”

LR: I know this might seem like an impossible task, but which of your Chinook couples holds a particularly special place in your heart (*cough* Jane and Luc *cough*) and why (don’t worry, we won’t tell the others)?

RG: I always say writing a book is like pushing a boulder up a hill. One day it’s joyful and rewarding and the next it rolls over you and smashes you flat. But if I have to pick a favorite book, it would be Lexie and Sean from The Art of Running in Heels. Mostly because the two are fresh in my head and I can still recall their banter.

Although . . . I do think I achieved artistic brilliance in See Jane Score when Luc offers to pee in Jane’s coffee cup.

LR: Do you ever take real people you know and put them into your books? What about real-life athletes?

RG: I put my mother and my son in Daisy’s Back in Town. I made my mom super loving yet very annoying with her nonstop talking. The saying, “can talk water up hill,” was coined for my mother, and it drives my son absolutely homicidal. My mother reads all of my books and she recognized herself. She thought it was funny and told all of her friends in a nonstop jab fest that is probably still going on to this day.

As for athletes, all of my hockey players are part Mark “The Messiah” Messier and part Stu “The Grim reaper” Grimson. A mash-up of finesse and enforcer.

LR: Which of your books was the hardest to write and why?

RG: Just Kiss Me. My personal life hit a wall and that affected my writing. I never thought that would happen to me. I’d hit the wall before, with the death of my brother and father and my son’s brain surgery, but I was able to pick myself back up and escape into my writing for a few hours every day. Not with Just Kiss Me. The harder I tried to pick myself up, the harder it got. The harder it got, the more impossible it became to write. I finally had to raise the white flag and call “uncle,” which felt so defeating. That’s why Just Kiss Me was released two years after the prior book, What I Love About You.

LR: If you were stranded on a desert island with three fictional characters, who would they be?

Keith Partridge: Can serenade me with “I Think I Love You.”

LR: What would you name the autobiography of your life?

RG: As a kid I hated to read because I’m dyslexic. That was before anyone had heard of dyslexia and we were all considered slow learners. In high school I took a job aptitude test and, while other students scored careers as doctors or lawyers or concert pianists, my results suggested I seek employment in a Chinese food factory. Why Chinese?—don’t know. Throughout my life, people have dismissed me and even scoffed at the notion that I could actually write a book. So, the title of my autobiography would have to be: How Do You Like Me Now—Bitches?

LR: As we bid farewell to 2017, what were some of your favorite reads this year?

Accidentally on Purpose by Jill Shalvis

Reread one of my all-time favs: Slow Heat in Heaven by Sandra Brown 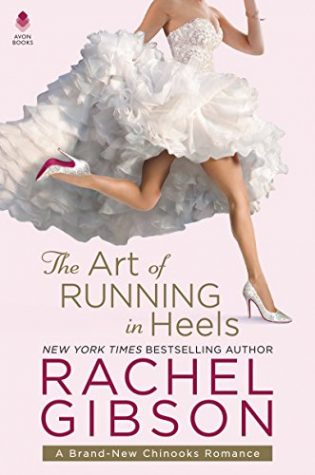 The Art of Running in Heels

Running in five-inch stilettos is an art form

Leaving your fiancé at the altar on live television is a disaster. Lexie Kowalsky thought she was ready to get married in front of millions of people, but at the last minute she fled the set of television’s hottest reality show, Gettin’ Hitched. Wearing a poofy white dress and a pair of five-inch sparkly shoes, Lexie hopped a float plane for Sandspit, Canada. She figured no one would find her there. But she was wrong.

Sharing her flight was the Seattle Chinooks biggest star, Sean Knox. Lexie wasn’t just a reality-show runaway, she was his pain in the butt coach’s daughter. She was chaos and temptation and definitely off limits, but getting her luscious body out of that wedding gown, he couldn’t resist getting her in his bed for one amazing night.

Then a photo of Sean and Lexi breaks the internet—and suddenly they’re both swept up in a crazy plan to spin the whole story. But you can’t run from love—

Neve Angel’s life is all work and no play, but she wouldn’t have it any other way. One of Denver’s top sports reporters, she's fought hard to make it in a male-dominated world, and she won’t back down from a fight with anyone–not even the Hellions’ gruff head coach, Tor Gunnar. Her hostile relationship with the icy Scandinavian is the stuff of local legend.

Tor Gunnar hates dealing with the media; at best, they are a nuisance and at worst, a distraction. And no one distracts him more than the scrappy, sexy reporter who gets him hot under the collar. When he wins a not-so-friendly bet with Neve, he decides it’s high time they either kiss or kill each other, and invites her as a date to an out-of-town wedding.

But what happens when enemies become lovers? Will they be able to smother their sizzling attraction, or is it time to start playing for keeps?

Lia Riley writes offbeat New Adult Romance. After studying at the University of Montana-Missoula, she scoured the world armed only with a backpack, overconfidence and a terrible sense of direction. She counts shooting vodka with a Ukranian mechanic in Antarctica, sipping yerba mate with gauchos in Chile and swilling fourex with stationhands in Outback Australia among her accomplishments. A British literature fanatic at heart, Lia considers Mr. Darcy and Edward Rochester as her fictional boyfriends. Her very patient husband doesn't mind. Much. When not torturing heroes (because c'mon, who doesn't love a good tortured hero?), Lia herds unruly chickens, camps, beach combs, daydreams about as-of-yet unwritten books, wades through a mile-high TBR pile and schemes yet another trip. She and her family live mostly in Northern California.

One set of print books – Rachel’s series
US ONLY

Love these two ladies! RG was one of the first romance author loves – she’s an auto-buy for me. :]

I think I love you is an excellent choice. Also, you should totally use that title!

I enjoyed reading the interview Q&A

Great interview!! I love all the books about the Chinooks!

Stu Grimson writes, too! And what’s wrong with a good mullet?

Fun Q & A. Both of their new books sound fun. I have never read either of these ladies! Thanks for the new authors!

I love the Chinook series and need to read the most recent release. I’m with Lia that Jane and Luc are my favorites from the series.

Thanks for the interview. I always enjoy reading Rachel Gibson’s books.

I remember reading (and loving) Simply Irresistible and See JANE Score about 15 years ago when I first discovered romance, and now my deep and abiding love for Sports Romance (particularly hockey based ones) makes so much more sense!

Ha! I love the title of what Rachel’s autobiography would be. And her book cover is so eye-catching with those heels!

I love the Chinook series and need to read the most recent release. I’m with Lia that Jane and Luc are my favorites from the series.

Stu Grimson writes, too! And what’s wrong with a good mullet?

I enjoyed reading the interview Q&A

Great interview!! I love all the books about the Chinooks!

Fun Q & A. Both of their new books sound fun. I have never read either of these ladies! Thanks for the new authors!

I remember reading (and loving) Simply Irresistible and See JANE Score about 15 years ago when I first discovered romance, and now my deep and abiding love for Sports Romance (particularly hockey based ones) makes so much more sense!

Love these two ladies! RG was one of the first romance author loves – she’s an auto-buy for me. :]

I think I love you is an excellent choice. Also, you should totally use that title!

Ha! I love the title of what Rachel’s autobiography would be. And her book cover is so eye-catching with those heels!

Thanks for the interview. I always enjoy reading Rachel Gibson’s books.