Welcome to Under the Covers, Nicole! You have a new book out called SHOULD’VE BEEN YOU. This is part of the Man Enough series. Could you please tell us about the series first?

Thank you so much for having me! Hope everyone is keeping warm this crazy season.

The Man Enough series is centered around four National Guardsmen friends. I called it Man Enough because each hero has something they need to be “man enough” to overcome. An insecurity, if you will, that may make them feel inadequate or incapable when it comes to their heroine. For example, book one is a blue collar hero that falls unknowingly for a very successful white collar CEO. It’s been a lot of fun writing these books and exploring the vulnerabilities of men. (And the women, let’s be honest. We all have insecurities and I guess that’s really the point.)

The premise of this story sounds sweet and like a lot of fun. What was your favorite thing about writing it?

I really enjoy writing and reading about a couple that has known one another for a long time. I guess you might classify this as a second chance romance, but technically it’s more of a second chance at a first chance. Hmmm…that’s getting confusing. 😉

What about the hardest thing?

Writing every book is hard to some degree. Romance is a genre that has to feel familiar to a point, but also fresh. It’s tricky to do that. Sometimes I feel sucessful, other times I stare at my computer for hours. This book was to be a novella, so that added another layer of difficulty. Trying to tell a couples story in a shorter amount of time and less words can be tough. However, that also makes for quick, fun, sexy nugget of a story. Great for a cold evening or afternoon. *wink*

What’s your favorite thing about Jase and about Becca? And why do you think they work so well together?

I think they work because they’re both at a time in their life where they’re ready for one another. It didn’t work out for them back in the day, and maybe it wasn’t supposed to. Their story was the one who came to mind first when I developed this series, so it was fun to finally be able to write it. One thing I wanted to come through about Jase, was that although he had a really tough childhood, it hasn’t destroyed him. He’s a fun, sweet, good guy. Having been close to Becca’s family is partly the reason for that.

Have you ever written a scene and ended up editing it out of a book?

Absolutely. But I still add more than I remove when it’s time to edit. What’s most common for me to remove is dialogue that makes me cringe upon rereading. Sometimes I wonder what in the world I was thinking.

For readers who haven’t read your books yet, if you had to describe your writing style in 140 characters or less, what would you say?

Relatable, emotional, and goes down easy. (Is that weird? I was going for super brief.) That would be a cringe line that I’d remove later. Ha!

Typically, how would we find you celebrating a release day?

I wish I could say something fantastic, like a fancy dinner or a spa day. But I find release days to be a bit hectic. Oh and get this, for two books in a row, I was at the dentist for a cleaning. NO LIE. Don’t ask how I let this happen, but my books at the time were on a six month release schedule…you can see where this is going. I swore to never do that again. I do make sure I’m not responsible for making anyone’s dinner which usually means we get take out or my husband cooks. That’s a celebration in my book! (no pun intended)

Lets get to know your reading tastes a bit! What is the last book that made you cry?

It’s been a while since a book made me cry. Probably IT ENDS WITH US, by Colleen Hoover.

FINDING BETH, by Lisa Tapp. This is a young adult romance that I absolutely loved several years ago. I’d never read anything like it. Here’s where I sound like Stefon from SNL…It has a little bit of everything: mystery, history, ghosts, and of course romance. Between longtime friends, also, which I love. I know this book could be loved by many if given the right shove. (If it had a rebrand with a new cover/new release I think it could do really well. Just sayin, Lisa Tapp…)

What’s next for Nicole McLaughlin? 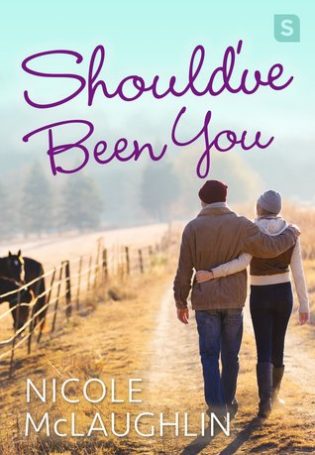 Should've Been You
by Nicole McLaughlin

Childhood neighbors get a chance at love in Should’ve Been You, an achingly romantic novella in Nicole McLaughlin’s Man Enough series!

National Guardsman Jase Beckford wants to live a quiet life raising cattle and taking care of his mother. His childhood friend and neighbor Hannah is still his best friend, but when he walks into the Walters house one morning and sees her twin sister Becca for the first time in five years, he wonders if he missed out on something special.

Becca Walters has nursed a secret crush on Jase since childhood, but he always preferred Hannah, so she buried her feelings assuming her sister and Jase would one day turn their flirtation into a real relationship. And this Christmas, she is anticipating a proposal of her own, so Jase’s reappearance in her life doesn’t mean anything. Much. Okay, maybe more than Becca would like to admit.

However, when Becca’s sister gets engaged to someone who’s not Jase, Becca and Jase find themselves spending more together. And when secrets are revealed, suddenly those dormant feelings come back to life; but is the possibility of something between them worth risking the happiness of everyone they love? 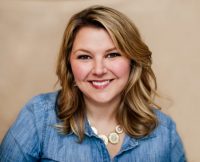 Nicole McLaughlin wrote her first full length book (6 pages) about the birth of her baby sister, when she was eight years old. She only finished it because her mother bribed her with a Rick Astley cassette tape. Sad, but true. Now her characters are what keep her writing and her subject matter has gotten a little bit deeper and a lot more romantic. She resides in a small town outside of Kansas City with her husband and three sons. When she isn’t writing, she’s a wedding and portrait photographer, loves to cook, and watch historical dramas or documentaries. She is the author of the Man Enough novel All I Ask and the Whiskey and Wedding series.

Fantastic Q&A, guys! I love the premise of these books and I’ve heard wonderful things. I bought the first one and didn’t realize there were more. Must catch up!

What a fun segment. Loved the 140 characters description

Great interview!! Shared on all my socials!!

ooooh… this series sounds fabulous! Thanks for such a fun spotlight! Congrats to Ms. Mclaughlin on the new release!

Congrats on the new book Nicole, I adore the premise of a second chance at a first chance of love! Can’t wait to read it!

Thanks for that great Q&A. I look forward to reading this book.

Thank you for the lovely interview 🙂

What a fun segment. Loved the 140 characters description

Great interview!! Shared on all my socials!!

Congrats on the new book Nicole, I adore the premise of a second chance at a first chance of love! Can’t wait to read it!

Fantastic Q&A, guys! I love the premise of these books and I’ve heard wonderful things. I bought the first one and didn’t realize there were more. Must catch up!

ooooh… this series sounds fabulous! Thanks for such a fun spotlight! Congrats to Ms. Mclaughlin on the new release!

Thanks for that great Q&A. I look forward to reading this book.

Thank you for the lovely interview 🙂