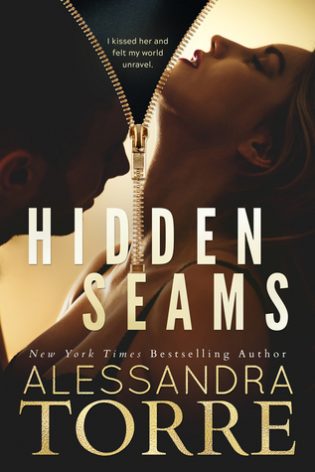 “While I can’t say this is one of my favorite books by Ms. Torre, I will say that it’s an unconventional one and I can only give her props for choosing to try different things in her stories.”
~ Under the Covers

If there is one thing I know I can count on when I crack open an Alessandra Torre book is that I’ll get an original story.  And sometimes that originality works better for me than others.  HIDDEN SEAMS I think falls somewhere in the middle.  I liked things about it.  Some of them even had me glued to the pages with wide eyed fascination and maybe a little uncomfortable.  Some I just couldn’t connect with because there are things I just don’t get.

Our hero has been in a publicly gay relationship with a famous fashion designer for ten years.  And now after his death and when Marco is set to inherit that fashion empire and finally be able to have all the liberties he wanted in the company and access to all that fortune, there may be a wrench on the road.  Avery.

I don’t want to give you guys many details because I always feel Ms. Torre’s books are better experienced and some things that may not seem like spoilers can diminish the enjoyment of the book.  So suffice it to say this story is unexpected.  I probably liked Avery more than Marco because I could understand her motivations and thought process more. I just couldn’t put myself in Marcos’ shoes and get to the same conclusions, the same decisions he made.  While I found him extremely sexy when it came down to that, I didn’t sympathize with him.

Avery on the other hand is just a broken girl looking for her place in the world and you can’t help but feel for her.  She was given up at birth, adopted by a couple that realized later on they weren’t really all that interested in raising a child.  She ran away from home and has been searching for her birth parents since, surviving the best way she can and hustling.

While I can’t say this is one of my favorite books by Ms. Torre, I will say that it’s an unconventional one and I can only give her props for choosing to try different things in her stories.  I am never bored when I read them.

Thanks for sharing your thoughts Francesca. I’m currently reading this

Great review Francesca!! This book sounds like a great read!! Shared on all my socials!

Hmmmm, I’m totally intrigued. Thanks for the review!

Hmmmm, I’m totally intrigued. Thanks for the review!

Thanks for sharing your thoughts Francesca. I’m currently reading this

Great review Francesca!! This book sounds like a great read!! Shared on all my socials!