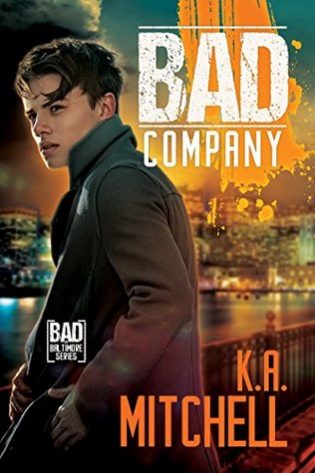 “I don’t think it’s my favorite in the series but it’s still very fun. ”
~ Under the Covers

I’m so happy that K.A. Mitchell and the Bad in Baltimore series has found a new home with Dreamspinners. I adore this series and I think it’s a great chance for readers to rediscover this series.

While I have read the latter books in the series, I haven’t read the first two books. That was why I jumped at the opportunity to read this now. BAD COMPANY is the first book in the series featuring Nate and Kellan. After reading it, I don’t think it’s my favorite in the series but it’s still very fun. If you haven’t read Mitchell before, she had a light tone to her writing. There’s a lot of fun banter, a lot of joking around. I really like that about her books. Friendship and various types of relationships are also explored in this series, which I can totally appreciate as well. It’s always nice when you have something other than a romantic relationship in the story as well.

I guess the reason why I think I am not head over heels with this book is mainly just because it took me a while to warm up to the characters. Sometimes it happens quicker than others and this one just needed some more time. As I’ve already read the other books in the series and enjoyed them, I am still going to read book two. It’s Beau’s book so eager to get to know him more.

K.A. Mitchell discovered the magic of writing at an early age when she learned that a carefully crayoned note of apology sent to the kitchen in a toy truck would earn her a reprieve from banishment to her room. Her career as a spin-control artist was cut short when her family moved to a two-story house, and her trucks would not roll safely down the stairs. Around the same time, she decided that Chip and Ken made a much cuter couple than Ken and Barbie and was perplexed when invitations to play Barbie dropped off. She never stopped making stuff up, though, and was surprised to find out that people would pay her to do it. Although the men in her stories usually carry more emotional baggage than even LAX can lose in a year, she guarantees they always find their sexy way to a happy ending.

Thanks. Glad that even though this wasn’t a favorite, the other books are good.

Thanks. Glad that even though this wasn’t a favorite, the other books are good.