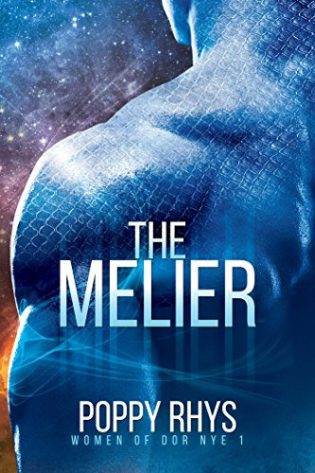 “Soren. What an alien.”
~ Under the Covers

I’ve been on a bit of Sci Fi alien romance run recently, luckily I am not the only one who like their heroes which extra parts and jewel toned skin. Some of our lovely followers of the Under the Covers Facebook page love it as well, and this series was one of the recommendations I received. In this review I will be talking about the first two books in the series: The Melier and The Melier: Homeworld. They focus on the same characters and is basically one big ol’ book split into two parts.

What I liked about this book and what grabbed my attention straight away was that the tables were turned. Normally it is a poor human woman who is kidnapped and her sexy alien mate saves the day. However, in The Melier our heroine Lucia saves our hero from slavery and gives him a chance at a brand new life. Unfortunately, Soren – as named by Lucia – has no memories of who he is or where he came from.

Soren. What an alien. If you like your aliens weird and alien then Soren is for you. Being 7 ft tall, with 4 arms and blue skin with some different alien equipment you won’t mistake him for a earthling. However, despite his intimidating look I loved Soren; as much as a 7ft, blue alien with 4 arms can be adorable, he was adorable, I think it helped that he purred when he was happy.

This was a great romance, however, I didn’t think it was a particularly sexy one. Despite loving weird alien differences unfortunately Rhys didn’t quite manage to make sexy times…sexy. Maybe because she focussed too much on how different Solen was from what you would usually expect rather than making the scene sensual.

In the second half The Melier: Homeworld Soren has recovered his memories and we go from Lucia’s home to his. And it’s clear that this couple are on their way to becoming a triad. I enjoyed this book just as much as I did the first part, we were introduced to members of Soren’s family who I really hope get a book of their own.

I also had the same issue with the second book that I did with the first it just wasn’t hot. Despite the addition of another sexy Melier. However, as the book wasn’t flooded with loads of sex scenes it was still a sweet alien romance/adventure and I was hooked.

If you like sci fi romances with aliens as heroes this is for you! If you don’t like your romances a little ‘out there’ then you will probably want to avoid this, it’s not every bodies cup of tea. For myself, I am already desperate to read the next book in this series and see what other wonderful alien treats Poppy Rhys has in store for me.

Great review Suzanne!! On my tbr gr list! Shared on all my socials!!

Yay! Thanks…I have been loving me some scifi alien romance!

Yay! Thanks…I have been loving me some scifi alien romance!

Great review Suzanne!! On my tbr gr list! Shared on all my socials!!