Welcome back Sylvain. We are excited to be able to talk to you today about your newest release, THE MAN IN THE BLACK SUIT. Can you tell us a bit more about this new standalone novel?

Thank you for inviting me. It’s a pleasure to be with you and the readers of Under the Covers again.

The Man in the Black Suit is a standalone contemporary romance/suspense novel, set in Paris. It follows the complicated relationship between Acacia Santos, a Brazilian concierge at the five-star Hotel Victoire, and a mysterious, handsome guest who she suspects is an art thief.

Setting seems to be a big part of your writing. Why did you decide to set this one in Paris?

Paris is an incredible city with inspiring architecture, exceptional views, and a rich history. It also has beautiful landmarks such as the Louvre and Notre Dame Cathedral. I wanted to transport readers to Paris and give them a feel for the city the way I did in The Gabriel Series with the city of Florence.

Tell us in three words what we can expect from this novel?

What’s your favorite thing about Nicholas?

Was there something particularly hard you encountered while writing this book? How did you overcome that?

Acacia is Brazilian and thus a minority in France. I wanted to touch on the anti-immigrant sentiments we unfortunately see in the modern world while at the same time showing Acacia’s love for her adopted country. It was a balancing act. I love France as well but like many people I’m troubled by the anti-immigrant/xenophobic attitudes I sometimes observe.

If you had to describe Acacia, what would you say?

Acacia is a strong person. We see her strength as she maintains a professional attitude as a concierge while at the same time facing various challenges from difficult guests. And she has a few talents that will surprise readers …

Tell us more about your writing process!

I write every day. But I also spend a lot of time researching my novels. I like to travel to the places I write about. I like to wander around the cities and observe people. I was fortunate to be able to spend time in Paris prior to writing The Man in the Black Suit. This enabled me to understand the city and hopefully, to transport readers to Paris through the novel.

The year is coming to a close, do you have any reading (and/or writing) resolutions for 2018?

I read “A Discovery of Witches” by Deb Harkness. I’ve known Deb for some time and she very kindly read my book “The Raven” before it was released and liked it. I enjoyed her series so much. It’s a masterpiece.

I read “Stiletto” by Daniel O’Malley, which is the sequel to “The Rook.” Both books were great.

I read “Dare to be Kind” by Lizzie Velasquez, which was an inspirational story of her own life journey and her challenge to others to be kind.

I’m writing the fourth volume in The Gabriel Series. It’s a novella, set after the close of Gabriel’s Redemption. I hope to release more details soon.

We are very excited!  Thank you so much for spending some time here with us today!

Thanks very much for inviting me to join you and your readers. I wish everyone a very Happy Holiday season and a blessed 2018. – SR 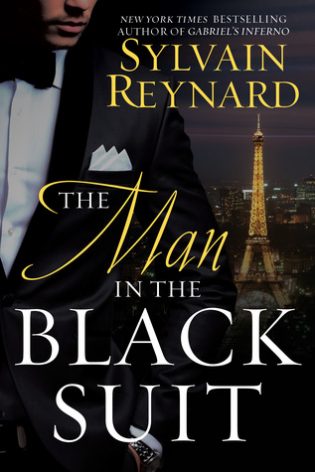 The Man in the Black Suit
by Sylvain Reynard

Acacia Santos excels at her job as concierge at the prestigious Hotel Victoire in Paris. When her superior, Marcel, is attacked in a supposed random mugging, she is tasked with serving one of the hotel’s most mysterious and attractive guests.

Nicholas Cassirer checks into the hotel under an assumed name every three months. Usually, he stays in the penthouse suite with a beautiful female companion but on this occasion, he arrives alone and is displeased in having to deal with someone new. A match of wits ensues as he tests Acacia’s expertise with a series of almost impossible demands. Her intelligence and creativity rise to the challenge, earning his respect.

They strike a tenuous accord until Acacia discovers a famous stolen painting in his suite, she contacts a former boyfriend who works for the elite BRB, a unit of French law enforcement that deals with art thefts.

Nicholas is questioned by police and released when it is revealed the painting is a reproduction. Irked with her behavior, Acacia’s supervisor demotes her threatening dismissal and the cancellation of her work permit.

But Acacia has already attracted Nicholas’s attention. Remorseful that she may lose her job on his account, he offers her a choice – she can wait until her supervisor dismisses her, or she can leave the city of lights behind and become his personal assistant.

Acacia initially refuses his offer, but Nicholas is persistent. He reveals himself as a man who quietly acquires stolen art in order to restore it to its rightful owners. Faced with mounting familial debts and the possibility of dismissal and deportation, she agrees to work for him.

Nicholas opens up a whole new world of beauty and intrigue to Acacia as they travel the globe. Soon the line between employer and assistant is blurred, and the two lonely people embark on a passionate relationship.

Hope to be able to read this soon 🙂

Thanks for the post, I haven’t read anything by Sylvain Reynard yet.

Great interview! I’m very excited to check this out.

I’m a huge fan of Sylvain’s, thanks for the great giveaway 🙂

I love how the settings are described…looking forward to experiencing Paris!

Awesome interview!!! I love,love sylvain’s Reynard’s books,he’s a fabulous writer!!! Can’t wait too read his new book!!! Shared on all my socials!!

Excellent interview. I have loved it, it seems to me that his recommendations and his way of doing the research for his books (as well as the dedication to do it), is inspiring.

Great interview! Thank you so much for the giveaway!!😍

I love how the settings are described…looking forward to experiencing Paris!

Excellent interview. I have loved it, it seems to me that his recommendations and his way of doing the research for his books (as well as the dedication to do it), is inspiring.

Awesome interview!!! I love,love sylvain’s Reynard’s books,he’s a fabulous writer!!! Can’t wait too read his new book!!! Shared on all my socials!!

Great interview! Thank you so much for the giveaway!!😍

Thanks for the post, I haven’t read anything by Sylvain Reynard yet.

Great interview! I’m very excited to check this out.

I’m a huge fan of Sylvain’s, thanks for the great giveaway 🙂

Hope to be able to read this soon 🙂