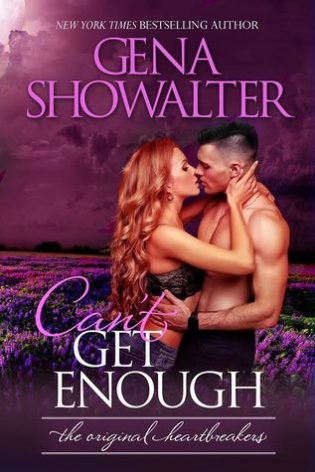 Can't Get Enough
by Gena Showalter

“It was fun, flirty, sexy and utterly unputdownable.”
~ Under the Covers

I’ve been waiting for this story!  Anxiously and impatiently.  Brock is the one night stand king.  Of course he has to be smitten and drooling over the kindergarten teacher who just happens to have gotten out of an abusive marriage earlier in the series.  He’s got huge commitment issues and she needs to build herself back up.  How on earth can those two meet in the middle?!  Trust Gena Showalter to do it perfectly.  Brock’s father passes away and for him to claim his inheritance (and get revenge on his mother) he needs to be married.  And Lyndie has caught baby fever!  But she’s still at that point where she doesn’t want a man because she feels she needs to stand only on her own two feet.  No help from anyone.  No one telling her what to do.

Enter my favorite thing for these two.  A marriage of convenience.  This technically started out as a fake relationship, but who are we kidding, that had to change.  The chemistry and attraction between Brock and Lyndie couldn’t be denied.  What’s even better is that I feel their personalities were perfect together!  Who would’ve thought that Brock had that fun side in him.  The big, broody alpha knows how to handle Lyndie who really just wants to have fun right now.

There’s not shortage of laughs with this book.  It was fun, flirty, sexy and utterly unputdownable.

Lyndie’s heart raced faster, every pulse point hammering.  Her body said: Remember the last time I had an orgasm?  Me, either.  Let’s change that answer to TONIGHT.

Cabernet said I’d have no regrets, but cabernet could be a no-good liar, so…

Ready to slay dragons, Brock faced his fiancée. However, the first words to leave his mouth? “You have the most beautiful eyes.” The absolute, unvarnished truth and much better than Please don’t leave me.

“Thank you,” she muttered. “My mother gave them to me. Um, why are we here, exactly?”

“And your wedding dress,” he said, continuing as if she hadn’t spoken. “My fetish is pleased.”

“You make the fetish sound like a separate entity,” she replied with a half-smile.

There. Now he felt comfortable enough to tackle her issues. “Are you having doubts about marrying me?” Even the thought of rejection sent panic spiraling through him, but sheer grit helped him maintain a neutral expression.

A wild gleam sparked in that golden gaze. “Are you having doubts about marrying me?”

“No. Now tell the truth. Are you having doubts?”

“Yes. No. Maybe? I’m just… I’m freaking out. Why aren’t you? Unless this is you in freak-out mode. Oh, my gosh. Is it? Do you have a fever? How many fingers am I holding up?” She extended her index finger directly in front of his face.

He rolled his eyes. “I’m in my right mind, doctor. You forget, I spent years as an Army Ranger. I’ve faced firing squads.” With his hands on her shoulders, he forced her to peer up at him. “We’re not trying for forever here. Just a month. Think of all the orgasms we’re going to have. Think of the little baby you’ll hold in your arms.” Manipulation? He sucked worse than he’d thought.

Everything about her softened, a small smile curving the corners of her rosebud mouth. “Maybe a little boy with pale green eyes, dark hair, and a wicked grin guaranteed to melt the heart of every woman he encounters. You’re right. I can do this.”

Melt the heart of every woman he encountered? That was how Lyndie saw him? Brock’s heart melted. “You can. You’re not alone. I’m right there with you.”

Straight white teeth nibbled on her bottom lip—soon, his teeth would replace them. “You’re right,” she repeated. “This is one thing I don’t have to do on my own.”

Propelled by a cool tide of relief—and urgency—he led her back into the sanctuary before she could change her mind.

“—and that’s how I wrapped Jude around my finger,” Ryanne was saying. When she noticed the return of the bride and groom, she gave Lyndie a thumbs-up and raced back to Dorothea’s side.

A round of applause erupted, and twin pink circles painted Lyndie’s cheeks.

“Pastor,” Brock said with a nod. He met Lyndie’s stare, a bolt of lust hitting him like lightning, stealing his breath all over again. We’re doing this. It’s happening.

“Dearly beloved,” the pastor began a second time. “We are gathered here today to celebrate the union of Brock Hudson and Lyndie Scott.”

My favorite type of romance is contemporary!

PNR is my favorite type of read followed by romantic suspense.

Awesome review Francesca!! I love this cover!!! One of my very favorites of this series!! Shared on all my socials!!

I have been reading lots of contemporary romance lately but I actually love them all!!

I love contemporary romances especially the ones with the brother’s best friend or the best friend’s older brother.

My favorite type of romance is contemporary!

I love contemporary romances especially the ones with the brother’s best friend or the best friend’s older brother.

PNR is my favorite type of read followed by romantic suspense.

I have been reading lots of contemporary romance lately but I actually love them all!!

Awesome review Francesca!! I love this cover!!! One of my very favorites of this series!! Shared on all my socials!!