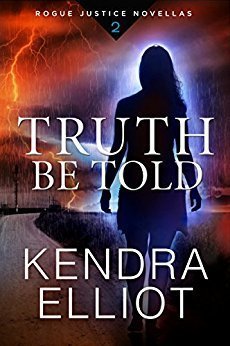 Truth Be Told
by Kendra Elliot

“I hope Elliot and Leigh do release more books in this series as I really enjoyed it.”
~ Under the Covers

This is the concluding book in the Rogue Justice series about one missing little boy, a murdered wife and a missing $10 million, which started in Twisted Truth by Melinda Leigh. We follow police officers Zane and Stevie Duncan, a husband and wife team, as they come across the bodies of two FBI agents who were supposed to escorting Liam, the boy found chained in the basement in Twisted Truth to safety. Instead, he is once again missing along with his uncle. But their small town is now complete cut off from the world by the storm coming in, meaning the murderer is still somewhere in town, and no one knows where he may strike next.

I wrote in the blurb that this was the concluding instalment of this series, I am actually not sure if that is true and if Melinda Leigh and Kendra Elliot are going to do more in this series. However, I can assure you that this was the concluding part in this particular story arc. I hope Elliot and Leigh do release more books in this series as I really enjoyed it. I said in my previous review that it felt as if these were characters that Leigh had written about before and I was right. Both Elliot and Leigh have collaborated on a series before, with the same characters, and I plan on giving it a try. If anyone else is interested, check out these series: Rogue River, Rogue Winter and Rogue Vows.

The action really kicks up in this book as the town is now completely isolated from any help. They just have small police force to not only keep the town under control in harsh conditions, but also to try and track down a murderer and save Liam. Stevie and Zane were new characters for me and I loved the strong sense of competence and compassion I got from each of them, they were a great couple. The story also kept you guessing as a few new elements were thrown in to keep us readers, and Zane and Stevie, on our toes.

A good mystery/thriller that kept me interested and engaged with both the story and characters all the way through.