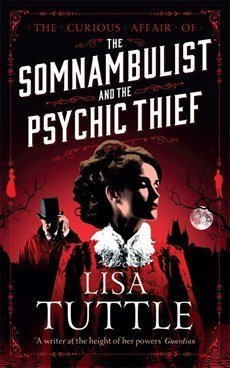 The Somnambulist and the Psychic Thief
by Lisa Tuttle

“The Somnambulist and the Psychic Thief goes to show that buying a book purely on the title and a bit of cover love is sometimes the right thing to do. ”
~ Under the Covers

The Somnambulist and the Psychic Thief goes to show that buying a book purely on the title and a bit of cover love is sometimes the right thing to do. This historical mystery, introducing the detective duo Miss Aphrodite “Di” Lane and Mr Jasper Jesperson offers readers psychic intrigue and a little bit of action as they work to uncover some dastardly goings on in historical London.

When I had finished reading this it took me a while to decide how to rate it. I was torn between 3 and 4 stars, so I settled with 3.5. However, there are some aspects that I really liked that go beyond that rating and some aspects that didn’t. Firstly, I will get the negative out the way. There were some aspects of this story that were introduced, but then seemed to be swept under the carpet, such as the consequences of Miss Lanes very hasty departure from her previous job. However, I may be doing the book a disservice and this is something that is addressed later in the series. But it niggled me. I also didn’t think there was much ‘detecting’ going on. Mr Jesperson is supposed to be a Sherlock type character who can guess your life history just by a glance at the shine of your shoes, which is fascinating in some ways. However, massive leaps in logic were made and happy coincidences did seem to dot the landscape quite frequently.

However, I did like the atmosphere that Tuttle created, the gloomy and dark streets of London; the warm, yet slightly impoverished offices/home they occupied; the fever for psychics and spirits that was present in Victorian London at that time. It was all very well portrayed and despite some teething problems with the mystery it did reel me in. This was also written from Miss Lanes POV, with her logical and formal tone, which once again added to the atmosphere of the book.

Overall, I did like this book it kept me hooked, this series definitely has potential and with the dramatic way it ended, I will be picking up the next in the series.

Sounds interesting…I may wait for book 2 though to see if more information is forthcoming and more detecting goes on.

Sounds interesting…I may wait for book 2 though to see if more information is forthcoming and more detecting goes on.