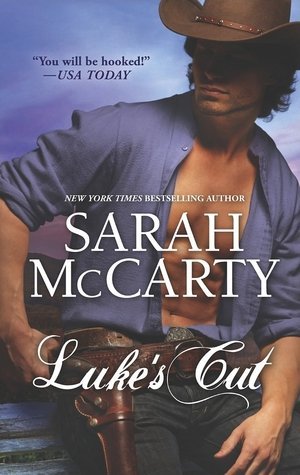 “Luke’s Cut felt a little Luke warm.”
~ Under the Covers

Luke Bellen is the last bachelor of the infamous and dangerous Hell’s Eight and seeing all the happily married couples around him has made him feel restless. Unlike his friends, he doesn’t feel ready for settling down on the ranch, but that doesn’t mean he doesn’t feel a little lonely when he sees the closeness the other couples have. Josey Kinder has spent most her life for apologising for existing and doing her best to become invisible, however, heading into the rough and beautiful terrain of the West calls to the wilder side of herself that she keeps hidden. Luke also seems to be chasing the mouse out of her as he seems to simultaneously provokes and cares for her. However, as they travel together through dangerous territory Josey realised it isn’t only her heart she is risking, but as bandits continue to pursue them, maybe her life as well.

Three years! Three years I have been waiting for this book, in what I assume to be the final book in the Hell’s Eight series, where we finally see the last lonely bachelor taking down by love. Was it worth the wait? Those long lonely three years? Honestly, I am not sure. I liked this book and as someone who doesn’t like to leave things unfinished I am glad we now have a full and complete set of paired up Hell’s Eight men. However, if I take that sense of tidiness and order away and look at the book in isolation…it was a good read but probably not worth waiting three years for.

Sexiness aside, I did like the romance between Luke and Josey, there was some good back and forth between them and I enjoyed seeing Luke help bring Josey out of her shell. I also liked that Josey wasn’t just a damsel in distress type, despite having no survival skills she some how managed to hold her own and keep Luke on his toes. Which, is exactly what Luke needed, unlike the others in Hell’s Eight Luke doesn’t want to settle down, he hasn’t quenched his thirst for adventure yet and luckily neither has Josey, another reason why they are perfect for one another.

Luke’s Cut although not my favourite book in the series, was a nice end to the Hell’s Eight series. I am keeping my fingers crossed though and hoping that McCarty will start a new spin off series for the Montoya Ranch! That way I can still see my Hell’s Eight honey bunnies AND see some more of the sexy Montoya men.

I hate when I wait for that one story and it falls short.

Thanks for the review. I’ve collected all of them and can’t wait to dig in and “glom read” the series. I know, it’s been a long wait. Has it ever been explained why the gap? Is she writing something else that I haven’t picked up on? Did she need to take a break for personal reasons? Curious minds want to know, lol

Great reviews Suzanne!! Love the cover too !! Shared on all my socials!!

I hate when I wait for that one story and it falls short.

Thanks for the review. I’ve collected all of them and can’t wait to dig in and “glom read” the series. I know, it’s been a long wait. Has it ever been explained why the gap? Is she writing something else that I haven’t picked up on? Did she need to take a break for personal reasons? Curious minds want to know, lol

Great reviews Suzanne!! Love the cover too !! Shared on all my socials!!

Thanks for your review. I am looking forward to reading this last book in the series..

Thanks for your review. I am looking forward to reading this last book in the series..