Welcome back to Under the Covers. We’re excited to hear about your new series, Heart Falls. The first book of the series is called A RANCHER’S HEART. What can you tell us about it and your inspiration for it?

Once the Six Pack Ranch series was complete, there were still stories to be told, and as usual, the characters had already made themselves a part of my world. Tamara and her story had been developing since ROCKY MOUNTAIN ANGEL, book 4 in the Six Pack Ranch world, so it was time…

Since Tamara and Caleb had already been introduced, it unfolded from there, yet at the same time Heart Falls is a whole fresh beginning. If you haven’t read the earlier books, you won’t be lost because we’re stepping into a brand new town and finding new people to love!

I’m very interested in Caleb Stone. It sounds like he’s been through a lot. How did the writing process go, writing about this complex character and what was your favorite thing about him?

I definitely had some ideas about him before I began, but the neat part about writing is the more I saw him on the page, the better I got to understand he’s not just quiet and gruff because he’s lazy or indifferent. My favorite thing about Caleb is how much he cares. And although he’s stubborn, he’s always trying to learn how to be better, especially when it comes to taking care of his little girls.

How do you describe Tamara is 3 words?

enthusiastic, stubborn (gee, see her and Caleb having some issues?), caring

What would you say is a characteristic that all heroines should have?

I love heroines who know what they want and how they get there. A heroine who knows when to confide in trusted family or when to lean on her friends is stronger because of it.

If you had to summarize this book in a tweet (140 characters or less) what would you say?

This cowboy has given up on love, but the new nanny might just make him change his mind.

What did you have the most fun with while writing this story?

Getting to know a new family, and the people in a new town. SO MANY STORIES!!!

We all love a single dad story! What is your favorite trope to write?

If you didn’t write for a living, what would you be doing?

I’d still be a storyteller somehow. I can’t imagine not writing.

What are you working on next and what is your next release?

I’m writing A Rancher’s Song, Walker’s story. And it’ll be out in May 2018. My next release is a paranormal coming in January, Wild Prince. It’s the fourth book in the Takhini Shifters series.

Thanks so much for taking some time and sharing with us today!

Thanks for having me and for loving happily-ever-afters! 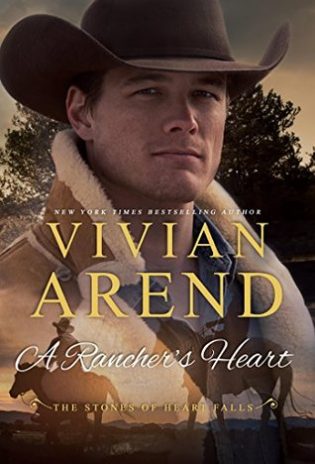 A Rancher's Heart
by Vivian Arend

This cowboy has given up on love, but the new nanny might just make him change his mind. The first in a brand-new series from New York Times bestselling author Vivian Arend.

Caleb Stone is wearing too many hats and it’s making him crankier than usual. He’s a cowboy, a father, and the head of his large family—and has been since tragedy claimed his parents over ten years ago. The ranch is struggling, but it's the title of single dad that’s got him tangled up in knots. He needs a full-time, live-in nanny at the Silver Stone homestead in Heart Falls, Alberta, to help with his two little girls, but the woman about to arrive on his doorstep? Tantalizing, tempting, and trouble with capital T’s.

Tamara Coleman doesn’t regret the choices that led to losing her job, but she definitely needs a fresh start. When a friend recommends her for a nanny position in a new town, she swears this time it’ll be different. No more acting on impulse—except sexy, gruff Caleb is exactly the kind of man who pushes all her buttons. And what’s more, it’s so much fun to push his in return. Sparks fly between Tamara and her gorgeous boss, but she can’t risk her position, and he doesn’t dare risk his heart.

With two people fighting their true natures, something’s going to give. Luckily, there’s more than one way to capture a rancher’s heart.

Vivian Arend in one word: Adventurous. In a sentence: Willing to try just about anything once. That wide-eyed attitude has taken her around North America, through parts of Europe, and into Central and South America, often with no running water.

Her optimistic outlook also meant that when challenged to write a book, she gave it a shot, and discovered creating worlds to play in was nearly as addictive as traveling the real one. Now a New York Times and USA bestselling author of over 30 novels and short stories in both contemporary and paranormal genres, Vivian continues to explore, write and otherwise keep herself well-entertained.

I love connected series’ and spin-offs. We get more in the world you have created and get answers to what’s their story <3 Thank you for the giveaway.

Vivian’s books have always been in my TBR pile…now i’ve bought book one and will dive on in !

Adding to my wishlist.

Vivian’s books have always been in my TBR pile…now i’ve bought book one and will dive on in !

Adding to my wishlist.

I love connected series’ and spin-offs. We get more in the world you have created and get answers to what’s their story <3 Thank you for the giveaway.