THE ONES WHO GOT AWAY

She bit her lip. Of course with his authoritative tone, her mind put him in a uniform and some aviators. She’d never had a particular fetish for men in uniform, especially after her own run-in with the police. But the thought of Finn wearing one and manhandling her a bit had her reconsidering. She would definitely get out of the vehicle. Maybe even let him cuff her. And as inappropriate as the thought was, considering the circumstances, it was a welcome respite from her nightmare. She cleared her throat. “I think you pull it off just fine.”

His dimple appeared beneath the stubble. “You’re blushing, Arias.”

“I am not.” She tipped up her chin. “I’m just…still flushed from all the adrenaline.”

“Uh-huh. Or you’ve got a secret cop fetish.”

“Stop flirting.” She pointed a finger at him.

“Am I flirting?” he asked innocently.

“Yes. And that’s not allowed. You yourself said that kiss was a mistake. So don’t come prancing around here half-dressed with your Batman abs and talking about where to put my hands. No one likes a tease, Dorsey.”

His grin turned roguish. “I said that kiss was a mistake, not a regret.”

“And Batman abs?” He grabbed the lapels of the robe like he was going to open it and check. “These old things?”

She stretched out her leg and kicked his thigh. “Stop it. You’re terrible.”

He lifted his palms in surrender and laughed. “At least you’re smiling now.”

It seemed even after all the years had passed, Finn still had the ability to get her mind off things. When her mom was going through chemo and everything was doom and gloom at home, Finn could somehow figure out ways not just to make her laugh, but to do so in a way that didn’t make her feel guilty for feeling a moment of happiness.

She leaned forward, bracing herself on one hand, and planted a kiss on his cheek. “Thank you.”

She looked up, meeting his gaze, and realized how close she still was. Close enough to see the flecks of gray in his green eyes, close enough to kiss him. She wet her lips. “Being you. I’ve missed that guy.”

His Adam’s apple bobbed, his gaze flicking to her mouth before sliding upward again. Her heart picked up speed, and his hand closed around her upper arm. “Liv…”

“I…” Whatever she was going to say died on her lips because the way he was looking at her made her forget her words. There was want there in those green depths—lust—but there was something else. Something that made her breath stall. Need mixed with something more dangerous. A wildness.

A curl of heat went up her spine, twining with unease. So much of her wanted to give into it, to see what exactly was simmering there between them. Just grab him and say to hell with it all and make the sheets even sweatier than they already were. But as much as he was drawing her in with that look, he was also warning her off. She didn’t know how she got that sense, but it was there, loud and clear. Push me away. Run. He wanted her to stop this.

He’d told her outside what he had to offer—nothing but a one night stand. And though right now that sounded all kinds of enticing, she wasn’t going to go there. He didn’t want this. Plus, even sober, it would be too close to how she’d handled her anxiety in college. She didn’t need to chase away her nightmare with a hook-up she’d regret in the morning. She wasn’t that girl anymore.

“Finn.” The word was strained.

She swallowed past the dryness in her throat. “We should get my stuff moved. It’s late.”

He stared at her for a moment and then his grip on her arm softened, his breath tickled her hair. “Right. Of course.”

He released her and she climbed off the bed with shaky limbs. She wouldn’t let herself look at him. She needed a task—something, anything, to get her mind off the man sitting on her bed. She packed up in record time, and Finn retrieved his gun from the drawer, tucking it in the pocket of the robe. No words were exchanged. When she was done gathering her things, he helped her roll her bag down the hallway to his room.

He let her inside and quickly rounded up his own stuff. He moved with quiet efficiency, awkwardness creeping into the silence between them and spreading into every corner of the room.

She leaned against the dresser, watching him, hating the growing divide. “Hey, Finn.”

He looked up, his hands full of computer wires.

“I know the kiss was a mistake and things have gotten a little weird and a lot personal tonight. But this—you and I having some time to talk—it was good. I think that’s what I missed the most when everything happened. Losing you as a friend.”

She crossed her arms and shrugged. “Yeah. We were good at the kissing, but we were better at the talking. I never had to fake stuff with you.”

She laughed. “That’s not what I mean, Mr. Mind-In-the-Gutter. I mean that things were easy between us. That’s hard to find with people. I’m realizing that now. I don’t…have that.”

He tucked the computer cords in his bag and straightened, his watchful gaze making her fidgety.

“And that’s not your problem, obviously.” She was rambling now but couldn’t bring herself to stop. “But I opened that stupid time capsule tonight and got to see a big long list of things I wanted to accomplish in life and haven’t. I was supposed to this. I was supposed to that.” She rolled her eyes. “I’m going to name my freaking autobiography Supposed To by Olivia Arias.”

She shook her head. “It’s fine. It is what it is. But all I’m saying is that I don’t want another regret added to the list. So I just thought you should know that you meant—mean—something to me. And maybe you could give a flying flip about me. I have no clue what your life looks like now, but I would rather not leave Long Acre later today and go back to being strangers. Because people you don’t have to fake it for are hard to find. So…yeah, that’s all I wanted to say. I’d like us to stay in touch.”

The corners of his mouth twitched. “That’s all you had to say?”

“Hey, I’m a photographer not an editor.”

“I thought you were a web designer.”

She let out a breath. “Maybe I’m just tired.”

Finn stepped around the bed and held out his hand. “Give me your phone.”

She was confused for a second, her brain running on too much adrenaline and too little sleep, but eventually his request registered. She reached into her bag to pull out her cell.

He took it from her and typed a few things and then handed it back to her. “You can always call me, Liv. For anything.”

She took her phone back, her hope sinking a bit. “Right. Thanks.”

He kissed the top of her head and then grabbed his stuff. “I’m going to get out of your way so you can shower and rest. If you need anything before breakfast, give me holler.”

He stepped out into the hallway without a backward glance and headed to the room they’d left, obviously more than a little eager to get the hell away from her. She didn’t blame him. She’d apparently become the queen of awkward conversation tonight.

With a sigh, she locked her door and made her way over to the bed and collapsed onto it. Spent. Exhausted. And a little frustrated.

But maybe she was grasping for something that didn’t exist with Finn anymore. Maybe she was just being nostalgic. They weren’t in high school. They didn’t live in the same place. They couldn’t just hang out. The time for that had past. She needed to be okay with that.

If he wasn’t interested in keeping in touch, she wasn’t going to chase him.

She checked the time on her phone to see how many hours she needed to kill before breakfast. But instead of seeing the time, she saw the address book entry Finn had made.

And a note beneath: You will never be a stranger to me.

Released: January 2nd 2018
Series: The Ones Who Got Away #1
Published by Sourcebooks Casablanca
Pages: 384 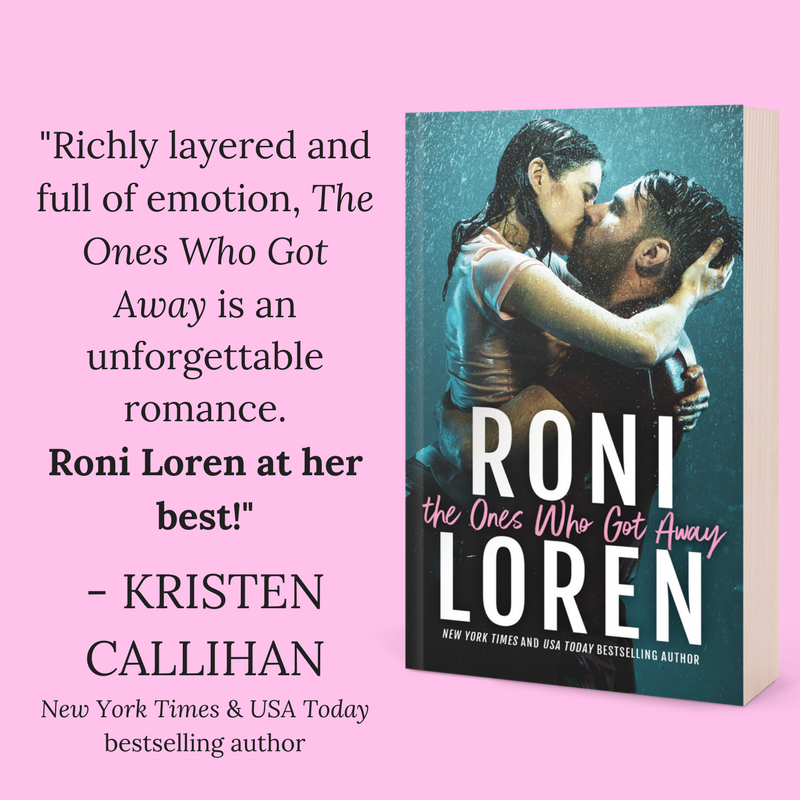 That excerpt definitely makes me want to read more about these two.

I want to read more about them!

i FLove Roni’s books ! I always appreciate and reviews or news on her books . Thanks

Sounds good!!!! Thanks for the chance!

I want to read more about them!

i FLove Roni’s books ! I always appreciate and reviews or news on her books . Thanks

That excerpt definitely makes me want to read more about these two.

Sounds good!!!! Thanks for the chance!