Can you believe it has been 10 years since Jeaniene Frost’s Halfway to the Grave was released? Cat, Bones and the whole Night Huntress crew have been in my life for a whole decade. Of course, there are many books that have been out for 10 years or more and many books that I read 10 years ago. Yet unlike many of those books Halfway to the Grave hasn’t slid away, forgotten, in a tiny nook of my mind.  Instead, it’s a book that I read again and again. I still laugh at the funny parts, the action is still just as exciting and Bones and Cat still sweep me off my feet with their witty, and sexy, back and forth.

So this isn’t exactly a scene, but I have to mention Cat’s sheer bravado and guts. In Halfway to the Grave she is at the beginning of her journey of being bad ass, the boogeyman that scares misbehaving vampires; the Red Reaper. Of course, she needs a little bit of training from Bones first but the will to succeed and be the most lethal vampire hunter is all hers!

You’re not a woman, you’re the Grim Reaper with red hair!

I love a book that has humour in and somehow Frost manages to cram sexual tension, romance, action, fantastic world building, unforgettable characters AND humour all into one book. Case-in-point Cat’s interrogation of a drunk and handsy ghost. Not only was it hilarious to watch Cat and the ghost get slowly inebriated, but that scene also gave us a peek into Bones’ feelings about Cat. Once again showing that Frost doing a great job of combining humour, character development and romance all into one scene.

“Winston poltergeisted my panties…”
“Why, you scurvy, lecherous spook! … If my pipes still worked, I’d go right back there and piss on your grave!”

Halfway to the Grave totally kicked off my love for vampires but it was this scene that totally made me fall in love with Cat and Bones. Not your typical vampiric couple, these two definitely have their ups and downs and I think the quote above nicely displays their natural chemistry. If you’re unfamiliar with the two, they’re much more badass than other UF couples you’ll meet. That’s why a lot of my fave scenes in this book are the action ones, especially when they are working side by side to kick some butt. I just love how unapologetic they are!

“I’m saying that I’m a moody, insecure, narrow-minded, jealous, borderline homicidal bitch, and I want you to promise me that you’re okay with that, because it’s who I am, and you’re what I need.”

Bones is a master in more ways than one. Managing to get Cat to talk dirty to him all in the guise of vampire killing training. He is a sneaky sexy devil. And boy, the whole scene was HAWT, despite the fact that they never even touch. The sexual tension between these two is reaching it’s peak and you just know SOMETHING has to happen before you go mad. Then the dirty talking ‘training’ scene happens and it may just be words, but you have the sneaking suspicion that they mean every word. I needed an ice cold drink and a fan to get through it!

“Is that a stake, Bones, or are you just happy with my new dress?”

“In this case, it’s a stake. You could always feel around for something more, though. See what comes up.”

It would be impossible to go through our favourite moments of HttG without thinking about Cat and Bones first met. The Night Huntress is a fairly romance heavy UF, so you might expect something romantic and heartfelt…well think again. Cat and Bones aren’t your conventional couple and neither is their meeting. It’s kind of seedy, kind of murderous, kind of hilarious and absolutely crammed full of tension. After reading their initial meeting, how could I do anything but read on?

“Don’t you want to go outside and… shag?” It was a strange word, but much better than fuck.

A quick grin lit his face before he responded. “Oh no. Right here. Love to do it in a truck.”

And, I will just leave you with one final quote, which anytime I hear it catapults straight back to Halfway to the Grave! 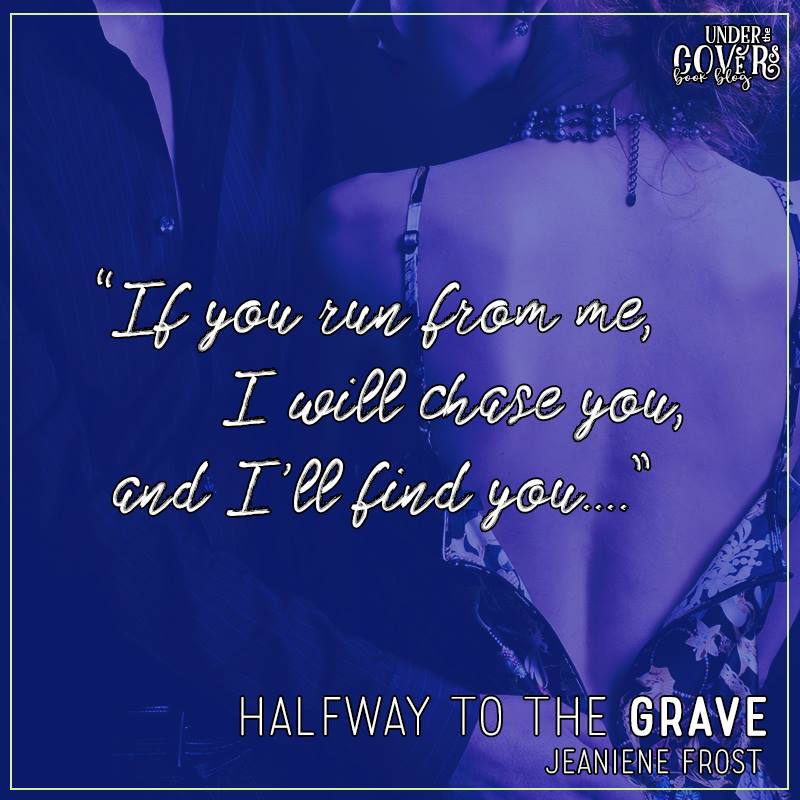 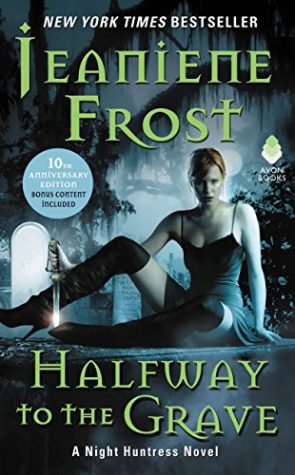 Still can’t get enough Night Huntress?
Here are some of the older posts we’ve done about one of our all-time favorite series:

Reading on the Dark Side – fantasy cast!

Have we mentioned your favourite moment from Halfway to the Grave?
Or, if you haven’t read this yet let us know if we’ve persuaded you to give it a try!

I have so many favorite scenes from this book and STILL will go re-read this one whenever I hit a book slump. This series makes me swoon, laugh, and gives me all the feels. Bones is one of my all time favorite heroes who always delivers the goods. LOVE!

The series is one of my all-time favorites and even better: It is timeless.

I loved this series, it’s been a while since I’ve read it.

That last quote always takes my breath away when I read it. SO good!

I have them all but only read the first one so far, I need to read the others soon

This book was such an incredible introduction to the series!

I love this book!!! I’ve read this entire series more then once!!! I love kat,bones and all the rest of the gang from Vlad to Ian to all the other characters!!!!shared on all my socials!!

The series is one of my all-time favorites and even better: It is timeless.

This book was such an incredible introduction to the series!

I love this book!!! I’ve read this entire series more then once!!! I love kat,bones and all the rest of the gang from Vlad to Ian to all the other characters!!!!shared on all my socials!!

I have so many favorite scenes from this book and STILL will go re-read this one whenever I hit a book slump. This series makes me swoon, laugh, and gives me all the feels. Bones is one of my all time favorite heroes who always delivers the goods. LOVE!

I loved this series, it’s been a while since I’ve read it.

I have them all but only read the first one so far, I need to read the others soon

That last quote always takes my breath away when I read it. SO good!