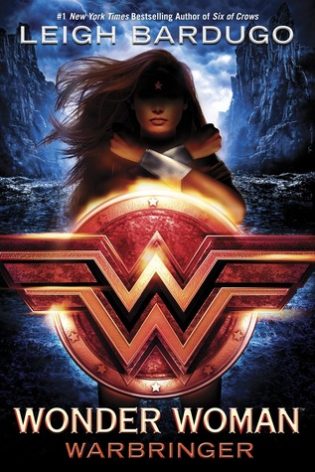 This summer I’ve been all about Wonder Woman because I absolutely loved the movie.  When I saw there would be a series about DC superheroes I may have gotten a little *too* excited and kicking that series off is WONDER WOMAN.  This was my first Leigh Bardugo read, yeah I know, I’m late to the party.

From the moment I started listening to this story, I loved how Ms. Bardugo twisted the WW tale into her story.  Diana Prince rescues a Greek/African-American girl from an exploding ship near her Amazonian island.  Little does she know at the time that Alia is a Warbringer, destined to bring death and destruction everywhere with her.  Having her on the island means Diana has a choice to make to help break Alia’s curse because she can be the cause for the end of the human world, just as much as hers.

I think it’s best if you don’t know much about the plot and just dive in and experience it.  It’s a twisty tale with a mix of Greek mythology and a strong message of female empowerment and friendships.  Just when I thought I had things figured out I realized that I didn’t really know what was coming, but I’m definitely pleasantly surprised with how this story was handled in the end.

While this book has a bit of everything: action, drama, romance (just a tad)… what I think stands out from the majority of books out right now is the diversity in the main characters and how well fleshed out they were.  And I say main characters because I feel that there were many important characters to this story, not just Diana and Alia.  Cultures, ethnicities, sexual orientation, race, social standings, body types… These are not your cookie cutter characters we get to read about generally and I think Ms. Bardugo did a great job representing each one and making us connect.

The pacing could’ve been a little faster but the humor certainly made up for it.  Witty dialogue and feminism drive this story forward and had me itching to get to the next book because this one was a hell of a lot of fun.  WONDER WOMAN: WARBRINGER is a must read for superhero fans but even if you aren’t you won’t have any trouble following along with this well thought out story.

Oooh this sounds really good, will definitely be adding it to my wishlist. Thanks for the great review Francesca!