I think it’s fair to say a lot of us love reading contemporary romances that center around sports, don’t we?  We have our favorite series/authors/sports and generally these books will leave you with a smile on your face.  NFL season is just getting started and maybe you’re feeling that itch to pick up a sports themed book wo we thought it would be great to pick author’s brains and ask them what’s THEIR favorite sports romances and maybe give you something new to read or simply a peak into their reading tastes.  This week it’s all about author recommendations here at Under the Covers and you’ll have daily opportunities to enter our week-long giveaway!

Today we have author Nicole Edwards talking about her latest fave.

Whether you’re into hockey or not, Lorelei James will pull you in from the beginning, she’ll wrap you in her intricate web of sexy, sassy characters, then hold you there until the very end. I was rooting for Annika and Axl from the get-go, unable to put this one down. In fact, I thought about them for days after I finished the book. I highly recommend you experience the notorious playboy hockey player and the PR princess who finds herself head over high heels for his delicious, bad boy ways.

All You Need
by Lorelei James

A hockey romance burns up the ice in the third sexy Need You novel from the "New York Times "bestselling author of the Mastered Series and the Blacktop Cowboys(r) Series.
PR agent Annika Lund can spin any disaster into a win. But revamping the reputation of a notorious Swedish hockey player will take every trick in her arsenal, especially when his agent insists that convincing everyone he s no longer a playboy is top priority. And that it requires a sham relationship with Annika playing the part of loving girlfriend.
On fire in the rink and in the bedroom, Axl Hammerquist couldn t care less about being anyone s golden boy. So when his agent forces him to play nice with a new publicist, he takes satisfaction in being as much of a pain as possible. But the more time he spends getting to know Annika, the more Axl starts to think that being Mr. Nice Guy might be worth it if it gets him the girl..."

Meet the most wanted players in sports . . . one ridiculously hot alpha male at a time.

Chase: With a nickname like “Sin,” it’s no wonder they call me the bad boy of hockey. Opponents curse me. Fans scream my name—in the arena and in other, much more private places. Penalties or not, I’m not afraid to dish out a little pain. But pleasure? That’s my weakness. And no one knows it better than my best friend, Cassie Desrosiers. I’d have to be blind not to notice her rocking body and teasing grin. So when she invites me along on a trip to Vegas, my curiosity isn’t the only thing that’s aroused.

Cassie: Chase Barrett is a world-class A-hole. As his best friend, I’m allowed to call him on his BS. Who else is going to do it? Certainly not the puck bunnies swooning at every flex of his biceps. Everyone knows that Chase is the love-’em-and-leave-’em type. There’s no such thing as commitment for the king of casual hookups. So why should I care? Maybe because all work and no play makes me a sexually frustrated girl. It’s time to put the hockey stud at my beck and call to good use . . . but after a week in Vegas with Chase, I might never want to go back to the real world.

New York Times and USA Today bestselling author Nicole Edwards lives in Austin, Texas with her
husband, their three kids, and four rambunctious dogs. When she’s not writing about sexy alpha males,
Nicole can often be found with her Kindle in hand or making an attempt to keep the dogs happy. You
can find her hanging out on Facebook and interacting with her readers - even when she’s supposed to
be writing. 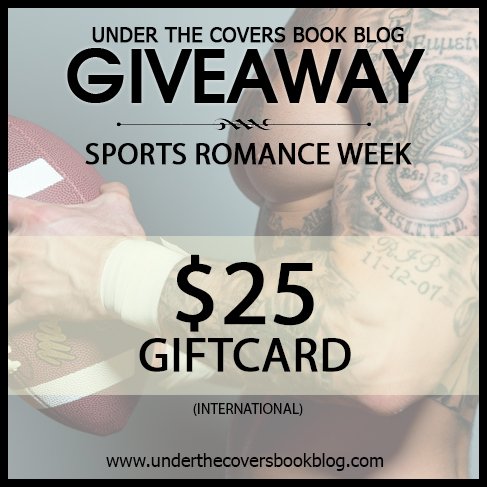 Question of the Day:

What sport do you think is underappreciated in romance
and you wish there were more books about?

I’m going to say Lacrosse. I like watching them play on Teen Wolf. Seems to take a lot of coordination.

I don’t see many books on soccer(football). Amy Daws has a series on soccer that I love.

I haven’t read too many gymnastics books

Soccer and I agree about Amy Daws! Polo-the best of both: sport & horses.

Aim not into sports romances that much, shared on my e!!

Tennis! I remember Donna Kauffman had some stories a while back around tennis, but that’s all I know of!

Rugby is way underappreciated & should be feature more in romance!

I would say soccer and rugby!

Basketball…I haven’t read many of those.

I would love to see an m/m water polo romance! And even though I’ve only seen one curling game and didn’t understand it even then, Teegan Loy’s THE MAGIC BROOM managed to make it sound kinda hot…