Welcome to Under the Covers, Monica!  We’re so excited for your new series The Lost Platoon. Can you please tell us what it will be about?

Thank you so much for having me! I’m super excited about the series as well. I’ve been sitting on this idea for a long time, and after finishing my twelve book Highland Guard series the timing was finally right. The idea for the series came after watching a Channing Tatum movie (The Eagle) on one of history’s most enduring mysteries: Rome’s Lost Legion, the soldiers who march into Scotland and are never heard from again. I have a bit of a Navy SEAL fixation (thank you Suzanne Brockmann!) and immediately thought of applying that idea to a platoon of SEALs.

In my Lost Platoon series, a platoon from SEAL Team 9—which doesn’t officially exist—is sent on a highly covert mission of a Russian weapons facility, looking for proof of a doomsday bomb. The Russians, however, are waiting for them. A warning from an inside source seems to have come too late. The men walk into a trap, and all are presumed dead. The truth of what happened to them is revealed over the course of the first three books.

GOING DARK is the first book in the series and it features a top secret SEAL team. What was behind your decision to write about SEALs as opposed to your well known highlanders?

In many ways I feel as if I’m writing about the same type of guys—give or take 700 years or so. What I loved writing about Highland warriors is pretty much the same thing I love in writing about Navy SEALs. At their core, my heroes are strong, smart, honorable, capable, natural born leaders with a fierce sense of duty—basically the kind of guys you’d want on your side when the you-know-what hits the fan. They are the guys running toward that burning building rather than away from it. I also really love the “band of brothers” type of interactions among groups of guys. I figure they’re giving each other a bad time whether in a contemporary or modern setting.

The heroine, Annie, is a marine ecologist. What was the most interesting thing you found about this occupation while researching it?

I really admire people who devote their lives to ensuring that the natural beauty of our lands and oceans are preserved for future generations. Like most people, I think I heard Marine Biologist or Marine Ecologist and think dolphins and whales, but the diversity and breadth of what these people do is amazing. It was also interesting to learn that Marine Ecologist is not synonymous with Marine Biologist. My simplistic differentiation is that biologists focus on marine life while ecologists try to see how that life interacts with the environment in the ecosystem. But don’t quote me 

Tell us 3 things about the hero, Dan, that you love.

Only three? That’s tough, LOL, as he’s probably my favorite hero to date. I think what I love most is his no-BS attitude, his sharp intellect, and that although he has strong opinions, those opinions don’t cut him off to other beliefs and ideas.

Do you have a favorite quote or scene that you can share without being spoilery?

A couple stick out—one on an island where they take temporary shelter, and one at the end with a football jersey.

What differences, and similarities, did you find in your process and in your style while writing romantic suspense as opposed to historical?

For the most part my process didn’t change. I love research, and with both the historical and contemporary novels, I start with tons of it. Once I feel comfortable with the subject matter, I put together a long synopsis that I use pretty much like a flight plan. I know the basic idea of where I’m going but the path may deviate along the way. But once I sat down to actually do the writing, I discovered that there were much fewer hiccups in the contemporary setting. I didn’t have to stop and translate the vernacular into a more medieval way of putting it; I could just say the vernacular. There are also far fewer small research items that come up along the way in the contemporary books.

Who is your favorite alpha hero right now?

Wonder woman! I was a huge fan when I was young of the Linda Carter series and the comic books, and it is so fun to see a great female action hero on the screen. I also love Wolfgang and Sun from Sense8.

Who are some of your auto-buy authors?

If you are not writing, what can we find you doing?

Traveling. Over the past ten years or so, I’ve become an avid traveler. I’m probably traveling 8-10 weeks a year nowadays. My favorite destination is definitely the UK, but I’ve been doing a number of hiking trips lately (Patagonia is on the horizon this fall) and I’ve also started doing Disney half marathons.

Tell us 5 things you are obsessed with right now (doesn’t have to only be about books!)

I watch a lot of TV so Game of Thrones, Shetland, and Catastrophe are three shows I love right now. I’m also going overboard on the RunDisney half marathons—I think I’m signed up for four this year. And after a trip to China this summer … dumplings and noodles. Can’t get enough.

OFF THE GRID, the second book of the Lost Platoon series, is due in mid-September so definitely in deadline mode right now!

Like Rome’s Lost Legion, a SEAL platoon goes on a mission and vanishes without a trace.

After walking into a trap on a covert op in Russia, the men from top secret SEAL Team Nine are presumed dead. Not knowing whom they can trust, and with war hanging in the balance, the survivors must go dark and scatter around the globe.

Marine ecologist Annie Henderson joins her new boyfriend on a trip to the Western Isles of Scotland to protest a hazardous offshore drilling venture. When she realizes that she may be swept up in something far more dangerous than she’d intended, there is only one man she can turn to. . . .

She and the mysterious but sexy dive boat captain haven’t exactly gotten off to the best start, but something about his quiet confidence makes her think that he’s the kind of man she can depend on. Because he’s gruff and guarded, she can tell Dan Warren has secrets. But she could never imagine how high the stakes are for him to keep his cover, even as he risks everything to protect her. . . .

Like most writers, I’ve always loved to read. Growing up in California there was always plenty to do outside, but all too often I could be found inside curled up with a book (or two or three). I started with the usual fare: The Little House on the Prairie series, The Chronicles of Narnia, The Hobbit, Watership Down, Nancy Drew, and everything by Judy Blume. Once I cleared off my bookshelf, I started swiping books from my mom. Some, like Sidney Sheldon’s The Other Side of Midnight, probably weren’t the most appropriate choice for a pre-adolescent—although they were definitely illuminating. I can still remember the look of abject horror on my mom’s Catholic-girl-face when I asked her what a virgin was. After that rather brief conversation, she paid a little closer attention to what had disappeared off her book shelf, and steered me in the direction of Harlequin and Barbara Cartland romances. I was hooked. I quickly read through the inventory of the local library and was soon buying bags of romances at garage sales. 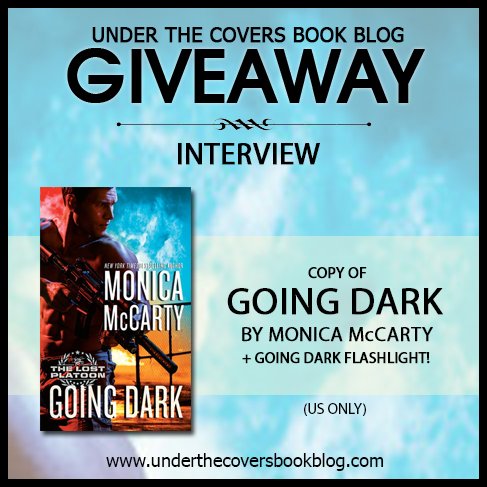 Congrats on the new release! Thanks for sharing ?

Congrats on the new release, the book sounds very interesting!

I like the cover. Also, yay game of thrones!

Great interview and giveaway!! Shared on my socials!!

I’ve read all of the Highland Guard series and loved them.

I am huge fan of your Highland Guard series. I have read them all and was sorry to see the end of the series. I think I will give the new series a try.

I’d love to check this series out!

I am so looking forward to reading this new series..

I’m loving this book and Captain Dan! Now I’m curious as to the football jersey. Only about 30% through, but I know Going Dark and The Lost Platoon series will be another winner. Congratulations!

Sounds like something I could sink my teeth in.

Great post! I enjoyed reading the interview. I have read a few of Monica’s Highlander books and loved them. I am looking forward to reading her new series. It sounds like the books will be amazing reads.

Love the interview thanks for sharing.

Thnx for the interview ,excerpt, and contest