She looked down . . . and saw her skin fading in and out. “No,” she whispered, curling her fingers into her palm to hide what was happening as she deliberately continued to eat her pretzel.

Nothing strange here, people, just a woman staring at the Legion building while stuffing her face as tiny droplets of rain dotted her hair and skin. Perfectly normal. Lots of people stared at the Legion building. The tourist buses didn’t dare cross the Tower’s territorial boundaries, but the non-Tower buildings lucky enough to have a direct view of part of the Legion building made good money renting out their roofs so the tourists could gawp at the beauty of a building bursting with greenery in the center of one of the most cosmopolitan cities on the planet.

Pretzel eaten and her misbehaving hand fully visible again, she put the scrunched-up wrapper in her pocket, then walked over to the thickest-looking vine and, taking a strong grip on greenery turned slick by the rain, began to climb. Her bones went liquid, her instincts sharpened, and her breath changed. She climbed like this was what she’d been born to do—and it wasn’t the human part of her that was in charge.

Exhilarated by how easy it was to scale the building, she didn’t care.

Maybe Venom was right when it came to certain aspects of who she’d become . . . but Holly knew there were also things inside her that should never be set free.

When she reached the balcony in front of the opening on the fourth floor that functioned as both an exit and an entrance—a large section with transparent hanging flaps of thick, heavy plastic that she figured must help maintain the temperature within—she straightened up and said, “Hello? Can I come in?” It wasn’t polite to just invite yourself into someone’s house.

If no one answered, she’d climb back down and try again another day.

But one of the Legion landed beside her in deathly silence. Her heart thumped. “Good afternoon.”

Rising up from his crouch, he looked at her with eyes translucent but for an outer ring of blue, his hair the same midnight as Raphael’s, and his face too flawless. He appeared . . . unfinished in some strange way. As if life hadn’t yet put a mark on him. And yet, paradoxically, the sense of age that clung to him made her bones ache.

Angling his head slightly to the left in a way that simply wasn’t human, he said, “What are you?”

Holly fought the urge to touch his face, discover if he was warm or cold. “That’s the million-dollar question.” Suddenly remembering that the Legion were meant to be thousands upon thousands of years old, she said, “Do you know the answer?”

A slow shake of his head, his utter calm unnerving. “We are losing memories as we exist in this time and this place, but it isn’t only memory that makes us. We have knowledge woven into our bones.”

“And what does that knowledge tell you?”

“That you are new.” He cocked his head deeper to the side—she was almost afraid he was going to do that thing owls did and turn his head upside down. “But you are old, too, though not yet fully awake.”

Holly swallowed hard. “The otherness inside me, what is it?”

“You and not you.” With that cryptic statement that made her want to shake him, the Legion being turned away, folding his wings neatly to his back. “You are new. You can come inside. My brethren will wish to see you.”

Though she suddenly felt like a science exhibit, Holly’s curiosity nonetheless compelled her to move forward.

Once a broken girl known as Sorrow, Holly Chang now prowls the shadowy gray underground of the city for the angels. But it’s not her winged allies who make her a wanted woman—it’s the unknown power coursing through her veins. Brutalized by an insane archangel, she was left with the bloodlust of a vampire, the ability to mesmerize her prey, and a poisonous bite.

Now, someone has put a bounty on her head…

Venom is one of the Seven, Archangel Raphael’s private guard, and he’s as infuriating as he is seductive. A centuries-old vampire, his fangs dispense a poison deadlier than Holly’s. But even if Venom can protect Holly from those hunting her, he might not be able to save himself—because the strange, violent power inside Holly is awakening…

No one is safe. 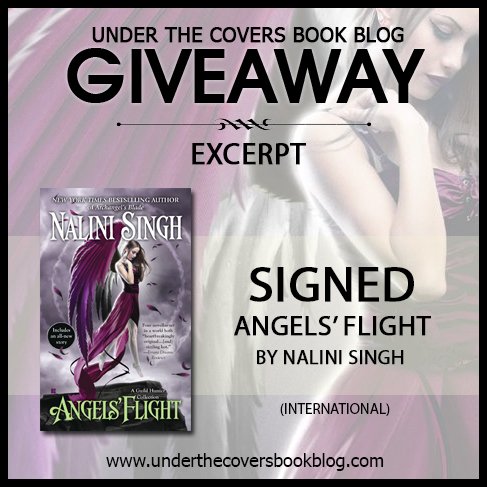 Thanks for the post, I’m behind on this series but what I’ve read I’ve loved.

Yay, more with Legion too! I love this series so much. I appreciate that Nalini has been able to keep it going so well with so many books. Most series over 5 or 6 books falter for me but not this one. <3

Diane D.
Reply to  Kassandra A.

Seconding everything you said!

Love this series! I would love to own a signed copy of any of Nalini’s books. Thank you

I can’t wait to read this one!!

WOW Kitty is truly an “other”??? The suspense is killing me but we’ll know very soon. Thanks for the excerpt!

Great excerpt!!! Shared on my socials!!!

OMG beyond awesome! I love Nalini’s writing so much. Thanks for this!

I absolutely love this series and can’t wait to read Venom’s book!!

Thanks for the excerpt, I’m a few behind but I love Nalini Singh’s books!

Love seeing the books all lined up together.

I am a little behind on the series.. But I think by one or two. Someone always beats me at the place I review for. LOL.

Angel’s Flight is one of my favorite in the series. Who am I kidding? I love all of them.

So excited Holly & Venom’s story is out. I read all of Nalini Singh and the only one I don’t get in print is the Rock series. I may have to go back and pick up print of those as well.

Ordered book from Amazon but it’s delayed in the UK?

Awesome excerpt!!! I would love to own a signed copy of any of Nalini’s books. Thank you

It’s been a while since I picked up a book by her. I’m going to have to now!

Thanks for sharing and also for the giveaway

Thank you for this wonderful chance <3