Philip dangled his glass from his fingers and quirked an eyebrow. “If Robert were still here I could do as I please, and I’d marry you in a heartbeat.”

Rose’s mouth twisted in a parody of a smile and his heart ached in his chest when even that faded. “It’s my reputation isn’t it?” she murmured. “You would prefer a virginal Lady Abigail.”

The very idea of Lady Abigail made him want to hurl his glass into the fireplace. “Don’t be ridiculous.”

Her beautiful face filled with anger. “Then tell me why. Why should we not marry?”

“I can tell you my reasons have nothing to do with you or your reputation.” He softened his sharp tone. “It’s not you, my sweet. It’s just I am not ready to settle down.” He grasped at straws; desperate for something she might believe. “The estate takes up so much of my time, and I want to make Robert proud of how I’ve stepped up to take his place. I never expected to be the earl”—that at least was not a lie—“and there is a lot to learn—and a lot at stake for my family if I fail.”

For a moment she said nothing. Then words spilled out of her. “I wish Robert had never gone to war. No. I wish bloody Napoleon had never been born.”

“No.” She slumped in her chair, blinking back tears. “When I was married to Roxborough I prayed every day that you would ride in and rescue me. It was silly. You didn’t even notice me when I was a young girl.”

Is that what she thought? He pressed a kiss to her palm. “I noticed you. Every man did. But at first I did not understand what your father was planning. When I did—that you were to marry a duke—I was sure your father would never allow you to marry the second son of a mere earl instead.”

She shook her head. “You misunderstand. I prayed you wouldn’t care about my father. I just wanted you to come and carry me away.” She brushed fingers over her eyes. “As I said, silly. The foolish dreams of a young, frightened girl.” Now she met his gaze. “Just as foolish, it appears, as the dreams I’ve had for the past year.”

“I thought you were just as averse to marriage as I.”

“I did say that.” She stared at him, head tilted as though she were trying to make sense of him. “It would appear I have changed my mind. Perhaps you will too, one day.”

“No.” He had to crush that hope before it took root. “It won’t happen.”

“Because,” she continued as if he hadn’t spoken, “if I knew that one day you might change your mind, I could carry on. I could wait.”

The wistful despair in her quiet voice made Philip want to weep. She loved him. It took all his willpower not to pull her into his arms and beg her to stay with him. But he could no more do that to her than he could pour out the truth about his vow. “No, my love. That would not be fair—fair to you. If you want to marry again then you will have to choose another man.”

He said no more, refusing to debate what he knew in his bones to be his only honorable course of action. Robert had sacrificed his life for Philip’s. He’d sacrifice his for Thomas, for his family’s sake.

Rose could hardly breathe through the pain. She’d ended affairs before, but they had rarely lasted more than a few months. She had certainly never fallen in love with any of her paramours—probably because she’d always loved Philip. Now she hoped none of those men had fallen in love with her. She would hate to know she’d caused any man this kind of pain.

Her love for Philip might have started as girlish infatuation with a fairytale hero, but over the years she’d fallen for the man—the foolish, pigheaded, arrogant, stupid man, sitting across from her.

Finally, he stirred. “Will you really not consider carrying on as we are?”

She studied his handsome features and was sorely tempted. But—“Will you really not consider making me your wife?”

“We don’t need marriage. We could be together for the rest of our lives.”

The idea was tempting. “You’ve forgotten Kirkwood. He won’t let this go on for much longer. Drake is seven—almost eight. Kirkwood will expect me to act with more decorum. If I’m lucky he’ll let me live quietly at my country estate. If not, he’ll insist I find a husband.”

She watched Philip’s mouth firm and his grip almost shatter the glass he held.

When he stayed silent, she tried again. “If Kirkwood insists on my remarrying I can’t take that step with you in my bed and—even worse—in my heart. I need to be free to find a man who, if he doesn’t actually love me, at least cares for me. And I need to be able to care for him. So, I am sorry, I have to refuse your offer.”

For one foolish moment she thought he might drop to his knees again and declare that if Kirkwood forced her into marriage then he would marry her. But she wasn’t a young girl any more, needing to be saved. She was a grown woman, needing to be sought after because the man she loved could not live without her.

He tensed, and then nodded slowly. “Then we are really over.”

“It would appear so.”

She sounded calm and rational. She felt as though her world, her heart, was exploding into a million little pieces as she sat there. They were finished. But they’d still have to move in the same circles. She’d have to stand by and watch as he took other lovers—

“I cannot believe this is to be our last night together,” he whispered, hoarse with pain. “Please, Rose. Let me make love to you. Just one more time.”

She wanted to deny him, to scream that he was being an idiot. But she couldn’t. She wanted one more night to cherish and lock into her memory against all the lonely days and nights ahead. She needed one more touch before he left.

She placed her glass on the table beside her, and stood. Then she moved to him, pulling up her robe and nightgown as she lowered herself to straddle his thighs. Her breasts brushed against his evening jacket, and she rested her forehead against his.

Philip’s arms tightened around her as if he’d never let her go. He began to kiss her face, her brows, and her eyelids as if he too were trying to imprint her into his memory. He nibbled at her cheek and chin, gently nipped her lower lip, drawing her mouth open to consume her tongue.

Her breasts lifted as her breath shuddered out, and her fingers dug into his broad shoulders.

He released her briefly to fumble with the tie to her robe, and then distracted her again by deepening his kiss, sweeping his tongue into her mouth in possessive ownership. 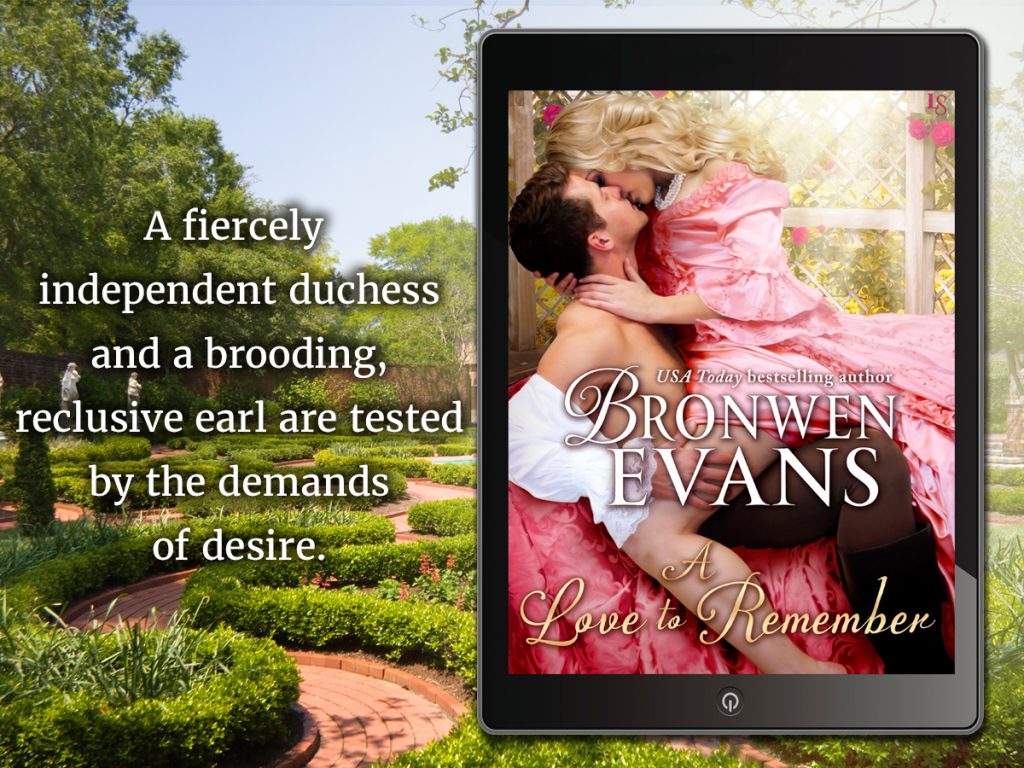 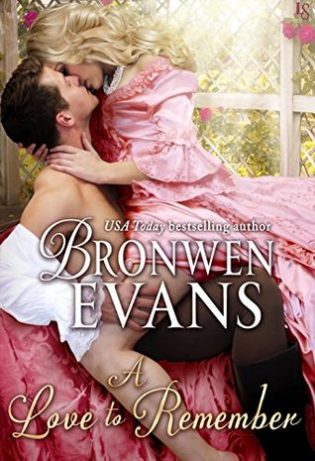 A Love to Remember
by Bronwen Evans

For Rose Deverill, one husband was enough. As the wealthy widow of the Duke of Roxborough, she has cultivated an unsavory reputation meant to discourage wife hunters. Thanks to a string of steamy affairs, Rose is perfectly content to be known by polite society as the “Wicked Widow”—until she’s reunited with the man she fell in love with at age fifteen. Their bedroom encounters are scorching, but it breaks Rose’s heart to wonder whether her reckless behavior ruined her for Philip Flagstaff.

The second son of the Earl of Cumberland, Philip never wanted the title. But after Philip’s older brother, Robert, follows him into the Battle of Waterloo, his worst fears come to pass. Now Robert lies in a soldier’s grave, and Philip is determined never to pass on the inheritance to children of his own. Then Rose appears, soothing the pain with her delightful curves and passionate kisses. The notorious Duchess seems to want nothing from him—and yet Philip has never ached to give a woman more.

Bronwen Evans grew up loving books. She has always indulged her love of storytelling and is constantly gobbling up movies, books, and theatre. Is it any wonder she’s a proud romance writer? Evans is a two-time winner of the RomCon Readers’ Crown and has been nominated for an RT Reviewers’ Choice Award. She lives in Wellington, New Zealand.

Shared on my socials!!