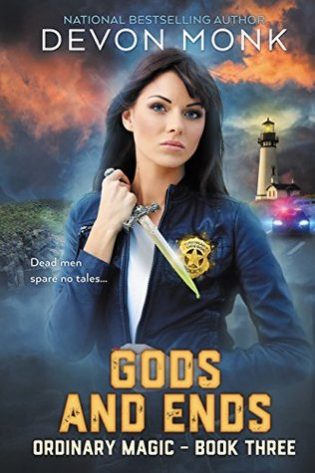 Gods and Ends
by Devon Monk

I was really excited about the release of this book.  As always, it seems as if they always come as an unexpected surprise because of the lack of general news about release dates ahead of time (or at least I always seem to miss it).  But as much as I was jumping with excitement to dive into GODS AND ENDS, once I started I found myself easily putting it down.  So I set it aside and gave it some time to come back to it maybe at a time that was better for my mood.  Sadly, things didn’t improve that much from there.

This book picks up right where DEVILS AND DETAILS left off.  I was intrigued by the story line in this one but I’m not sure I loved so much the execution and the turns of events.  One of my favorite things about this series are the Gods and they were missing a bit from the story here.  Not completely, but the feel of them was certainly less.  Less jokes, less Death.  Perfect example of what I wanted more of is one of my fave quotes/moments referenced below.  I needed more of that!  In the end, it seems there might be a little switch on where the rest of the series will go especially with how things turned out in this book, but I’m still holding out hope that we can get that essence back in the next installment.

But all that aside, we have Delaney Reed.  The heroine we’ve been coming to love throughout this series.  And she’s just as great in this one.  I really do like her character and her fierce loyalty for upholding her role and protecting people.  Even at the highest cost to her.  She was one of my favorite parts of this book!  And yes, maybe a certain demon as well.  Is that wrong of me?  I kinda love those obscure characters that you don’t know whether they’re good or bad, or maybe just a mix of both.  So that was a refreshing addition to story.

Everything else, though, felt like it took a backseat.  The town and the romance… While this was a more subdued version of Ordinary in my opinion and lacked that spark that originally attracted me to the series, I’m curious to see where we go from here for sure.

“It’s much worse than demons.”
“Vampires?” I asked.
She pressed her lips together, disappointed in my mental abilities. “How about you just tell me, Bertie so I know what kind of weaponry to pack.”
“It’s the knitters. They’ve declared war. And the crocheters are geared up for the siege.”
Pause.
“What now?”
“The knitters. You know. The K.I.N.K.s and C.O.C.K.s.” 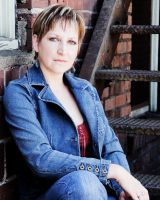 Devon Monk writes the Allie Beckstrom urban fantasy series and the spinoff Broken Magic series. She also writes the Age of Steam steampunk series, the House Immortal series, and the occasional short story. She has one husband, two sons, and lives in Oregon. When not writing, Devon is either drinking too much coffee or knitting silly things.

Thanks for this review. I loved the first book in this series mainly because Delaney and her sisters were such strong characters, and I loved the premise of the series. I enjoyed the second although it seemed that Delaney’s strength and good judgement was being subjugated in favor of the romantic elements. I’m sure I will continue on to the third, but I agree with you that the gods are one of the best things about the series, so hopefully they will become more prominent in later installments.

I did like the first book. Delaney is a great character. This series isn’t a go-to for me, and after reading this I will wait to see how the next book goes before I decide if I want to continue.