A Leader is Chosen: Tariq Becomes Mikhail’s Ideal Choice to Lead the Carpathians in the United States

Though we as readers met Carpathian Tariq in the novella Dark Crime, it isn’t really until Dark Carousel that we have a clear understanding that Tariq isn’t just a leader in his area, but has been chosen by Mikhail to be the leader of Carpathians in the entire United States. And there are very good reasons for this.

Unlike many older Carpathians, Tariq embraced humans and immersed himself into their world. He knew them, how their world worked and even embraced technology as it evolved, using computers, cameras, the internet to not only look for his lifemate, but also to fight vampires.

Tariq knows that night clubs bring in lots of people and he has several of them, working with other like-minded Carpathians to utilize his natural abilities and the human technology for furthering his search. He created a compound with the knowledge that he’d be building his own community there, a fortress and a home.

A lot of the other Carpathians were very resistant to integrating with humans and using their technology. If you’re thinking of someone who would be resistant you might think of Zacharias who didn’t even speak to humans. Or Gregori who had nothing to do with humans. So Tariq was the perfect person for Mikhail to choose to represent him in the United States. This was a man who knew humans and could easily be amongst them and felt very comfortable in that skin.

In the new Carpathian novel from #1 New York Times bestselling author Christine Feehan, a woman falls prey to the seductive allure of the past—and a vampire warrior’s intoxicating embrace...

The moment Charlotte Vintage walks into his club, Tariq Asenguard’s blood is set on fire. The ancient Carpathian had given up hope of finding his lifemate, but now he will do anything to make Charlotte his own. What Tariq doesn’t know is that Charlotte is using herself and her best friend as bait—to try to draw out the bloodthirsty killers who have already murdered Charlotte’s brother and mentor.

Charlotte is familiar with Tariq. Not only is he one of the richest and most eligible bachelors in the city, but he’s also a renowned collector of old carousel horses, which Charlotte restores. Their shared passion opens Charlotte up to trusting him with her life and with the desire she can no longer control. But it also makes her vulnerable to a centuries-old curse that will unite her and Tariq in a war against the enemies of humans and Carpathians alike... 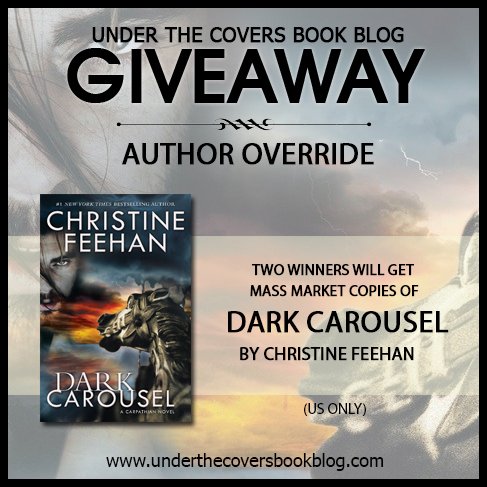 Christine Feehan weaves a wonderful world full of people that come to life and surprise the reader. She is an excellent Author and I love all of her books.

I really enjoy reading this series, and this one was a very good.

Mikhail is a smart leader of the Carpathian people. He chose well in sending Tariq as leader in the US. I loved Dark Carousel, and all of the wonderful characters. I’m looking forward to reading Dark Legacy in September.

This is one of my favorite series and I have every one in mass market! It would be awesome to win one. Thanks for the giveaway.

The extensive network of Carpathians across the globe is absolutely fascinating, and I love the way that Christine Feehan spans so many countries and continents inside this series. Coming back stateside is as exciting as visiting the Carpathian Mountains or South America, and I can not wait to see what continues to happen w/our America-based group of Carpathians!

Dark Carousel is becoming one of my favorites of this long running series. Past events are revealed to merge with the present day storyline and it has me eagerly awaiting Dark Legacy.

Your Dark series is one of my favorites!!! I’m just about done reading Dark Crime. It’s so hard to put down!! I can’t wait to read more about Tariq!! Thank you so much for writing such entertaining stories that you can fall right into!!

I love this series and the way it’s evolving!

Dark Carousel will have you reading the story in one sitting, so be sure to start it early in the day. Charlotte and Tariq’s story is an intriguing mix of back story and new additions that tease about the future of the series!

I really loved this book and look forward to reading the future stories of the characters highlighted in this novel. Christine’s Dark series is one of my favorite series; I read and re-read them constantly!

I absolutely love all of Christine’s books! I have read all of her books in each of her series! You will not be disappointed with any of her books! Dark Carousel was definitely a great read and I couldn’t hardly put it down until I finished it. Please give Christine’s books a try; you will be amazed how well her books are written!

This is such a good and intense series, while including light-hearted moments, camaraderie and a strong sense of family with all the characters.

I was blown away by THIS book.ive always felt like I was sitting of the side watching the story unfold, but this time I literally felt like I was walking with the characters.it was amazing.

Always a great interview and review. I need to get back to this series, i got distracted with other series!

Thanks for the post, I haven’t read anything by Ms. Feehan.

I truly envy you, Amy. You have many, many hours of enjoyment ahead of you. When I discovered Christine Feehan , about 10 years ago, I had retired from work and needed to be entertained. I read all her books in all the series and continue to do so. Try to read them in order. Happy reading!

LOVE Christine Feehan and those amazing Carpathians! Thanks for the chance!!! <3

I’ve only read one book by Freehan. I have a lot of catching up to do!