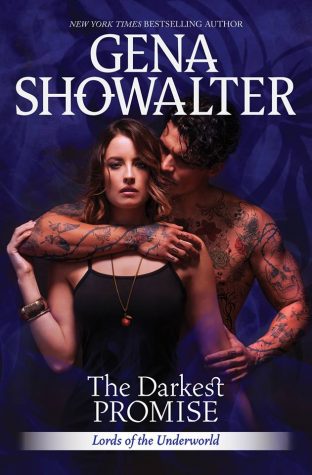 The Darkest Promise
by Gena Showalter

“Anytime I crack open a Gena Showalter book I know I’m in for a fun and sexy ride.  THE DARKEST PROMISE delivers.”
~ Under the Covers

I’ve had a soft spot for Cameo since the very first time we meet her.  She’s the keeper of Misery and she can’t even speak without everyone around bursting into tears!  The girl has had it bad.  Plus, she’s also had her heart broken when she was betrayed by a previous boyfriend.  I thought her little affair with Torin was interesting but I wanted to see more passion for her.  I wanted someone to tip the scale and give her so much pleasure it would override all the misery she’s had to deal with.  And then we get Lazarus.  And boy was this exactly what I was hoping for!

Cameo and Lazarus have met, and even been lovers before.  But as with anytime she experiences joy, Misery wiped her memory of those encounters and she doesn’t remember Lazarus.  But she knows there’s one man she’s maybe able to be happy with and she goes in search of him into another realm.

I LOVED THESE TWO!  OMG I wasn’t even expecting to love them so much.  First Cameo, because the more you know about her and how she has to suffer with her demon, the more you feel bad for her and just want her to finally have happiness.  You want to see her smile!  And then there’s Lazarus.  He’s a bad boy, through and through, and I was happy to see that we are not changing the core of who he is.  But his love and devotion for Cameo really knows no bounds.  Even if that includes betraying her to keep her safe.  Or just relentlessly pursue her and tirelessly try to make her experience joy.  I really think he’s perfect book boyfriend material and I couldn’t have fallen more in love with him.  He’s fierce when it comes to protecting the ones he cares about, whether his woman or his pet sky serpents.

Another thing I really enjoyed about this story was the obstacles they had to overcome to be together.  I love stories that seem impossible to have a happy ending because it just seems the author had to really dig to make that happen in a way that makes sense and doesn’t feel “too easy”.  This book satisfied that for me.  And through that search of their HEA we are also moving the overall series forward quite a bit, which I’m so excited to see.

This book is filled with Ms. Showalter’s signature wit and humor.  I couldn’t help but smile every other page, sometimes even in the middle of swooning.  That is definitely one of my favorite things about this series.  As much as I fall in love with the characters and the world building is engaging and intricate, it’s that wit that gets me all giddy.  Ok, yeah, and the hot alpha men too. 😉

Anytime I crack open a Gena Showalter book I know I’m in for a fun and sexy ride.  THE DARKEST PROMISE delivers.  I think the overall series arc is building up nicely, this one is a great addition to all that while being an excellent romance on its own.  I am definitely anxious to read the next one.  Give it to me!

“Don’t try to stay ten moves ahead of your opponent.  Stay behind him with a knife.”
— Excerpted from Becoming the King You Are Meant to Be, a work in progress by Lazarus the Cruel and Unusual

She had a Sexually Transmitted Demon, and almost everyone she dated ended up depressed at some point.

I love the quotes!

Awesome review!!!love this series!! Shared on all my socials!

EEEEP! Love me some Gena. Can’t wait to dive into this. Thanks for the review, Francesca!

I need this book NOW! If I wasn’t so behind in review books, I’d already be on this. I just might make it my next read!

Cameo and Lazarus have been a couple I’ve been waiting for. So glad you really enjoyed their story.