“The story will pull you into the world of young rulers coming to age and maturity, and a love interest that will keep your romantic heart swooning for more.”
~ Under the Covers

If you liked Kiersten White’s And I Darken or Mary Pearson’s The Remnant Chronicles Trilogy, you will enjoy Cora Carmack’s ROAR. Similarities include a world of kingdoms and its land, rulership, and magic. The story will pull you into the world of young rulers coming to age and maturity, and a love interest that will keep your romantic heart swooning for more.

Aurora is betrothed to a storm wielding prince whose possible purpose is to take over her kingdom. Unfortunately, her magic is nowhere to be found, and she is powerless to refuse the marriage. Much less to protect her land from deadly storms. Realization and desperation forced Aurora to run away in hopes to find another way to gain control over her life and maybe, save her kingdom.

There are many things I enjoyed about this book. I respect Aurora’s determination to find who she is and will power to be more. I thought her decision to leave was the best for her and her people. Locke, her love interest was your typical dark and brooding hero who refuses the heroine in the beginning but his true feelings were obvious. He was also very alpha. I loved the secondary characters and their revealed background intrigued me. My favorites are Nova, Sly, and Ransom. Their personalities and background were fascinating, but I didn’t get enough of them. I’m hoping to get more of the crew in the next installment.

I think Carmack did a good job with the world building. I was intrigued by the dangerous storms that connect to magic, souls, and the people that can control or wielded it. The legends of the land and its people were also very interesting. Unfortunately, there was also some turn offs. Like I mentioned, the storyline and parts were similar to other books I’ve read. Because of that,  it was easy for me to predict what was going to happen. Don’t get me wrong; I still enjoyed this book, I just didn’t enjoy certain parts. I do hope that it will get better with each installment. From what I hear, Carmack is a solid author to follow.

“No need to burn people from the inside out, Etel. This one is with me.”

A large, masculine form pressed into Rora’s side, and a heavy arm draped over her shoulders. The old woman straightened. She scowled and spit on the ground, and when she spoke, her tone was higher, less raspy, “Ye could have told me that, Locke, before I wasted me time.”

Rora froze. Cassius. He’d found her. She had been so distracted by the woman and her wares that she hadn’t thought to keep watch. He pulled her forward, and her feet dragged like lead. She couldn’t take a deep enough breath, and her eyes began to cloud with tears.

What have I done? How will I explain this? What will he do to me?

“Come on, girl. I’m doing you a favor getting you away from that fraud. You could at least play along.”

Rora lurched to a stop, and jerked her head upward. That wasn’t Cassius. Her hood began to slip backward. She tried to catch it, but her movements lagged behind her mind, and her injured arm had grown stiff and numb. Cool air hit her uncovered cheeks, her nose, then her forehead. Even with the scarf hiding her hair, she might be recognized. And she had a feeling this was a very bad place for a princess to be.

The hood’s descent halted; it wasn’t her fingers that had caught the fabric but his. He was so tall that Rora had to crane her head back to see him. His hair was a dark, wavy brown and hung long enough to brush against his shoulders.

“Keep that hood up. This is no place for little girls.”

“I’m not a little girl!” She clamped her mouth shut, immediately wishing she could take the declaration back. Not only because it sounded exactly like what a little girl would say but also because she had not tempered her volume. At all. And thought it wasn’t Cassius who caught her, he was here somewhere. She bit her lip in worry, and the stranger’s eyes tracked down to her mouth briefly before darting around her face.

He still held on to her hood, keeping it back enough that he could see her eyes. “So you’re not a little girl. Still doesn’t mean this is any place for you.”

She could not argue with that.

“She called you Locke.”

His eyes narrowed. “Yes. And?”

He laughed so hard that he released her hood. She rushed to grab it and pull it down to cover her face. She had no doubt people were staring now. He sucked in a breath, and then as if he couldn’t help himself, burst into laughter all over again.

Still chuckling, he said, “I’m about as much a prince, as you are a princess.” 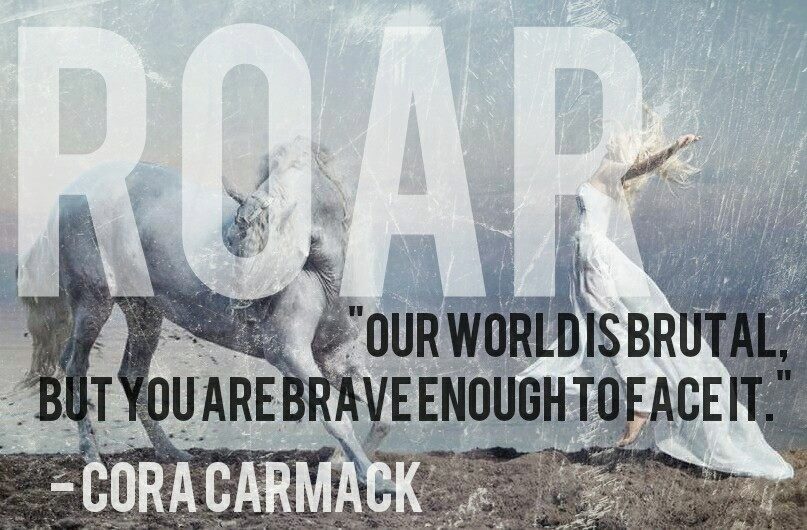 I'm Cora Carmack, a twenty-something writer who likes to write about twenty-something characters. I've done a multitude of things in my life-- boring jobs (like working retail), Fun jobs (like working in a theatre), stressful jobs (like teaching), and dream jobs (like writing). I enjoy placing my characters in the most awkward situations possible, and then trying to help them get a boyfriend out of it. Awkward people need love, too. I'm a New York Times and USA Today bestseller... and a nerd (mostly the nerd part).

Thank you for the review. I love the cover.

Great review!! ,shared on all my socials!!

Added this to my tbr….thanks!