Welcome back to Under the Covers, Santino! We are thrilled to be able to talk to you today about OVERSIGHT, the second book in The Community series.  These books center around psychics. What drew you to create a series about this?

Honestly, I was inspired by books like Psycop by Jordan Castillo Price as well as documentaries on Scientology. I know that’s an odd mix, but I was really into the idea of psychics being at risk from not only the non-psychic world like in Psycop (where they were experimented on), but what if the psychic world is a danger as well? And what if they controlled psychics by gas lighting them and manipulating them to make them dependent on this community?

My idea was for an outsider of the Community to discover it in INSIGHT, for people who had long been immersed in it to recognize the problems in OVERSIGHT, and then for our band of queer heroes to take it on in the final book which comes out in October.

How would you describe Holden Payne?

Privileged but extremely aware of it. Arrogant. And yet, insecure and extremely wary of the people around him. He grew up being regarded as a kind of prince of The Community, and yet his own father—the founder—looks down on him for his sexuality and decision to run Evolution, a queer psychic friendly night club. He is used to people wanting to use him, and doesn’t really trust the people who want to get close to him.

Sixtus Rossi is another character that I’m intrigued by. What would you say is your favorite quality about him?

He is extremely blunt. He doesn’t have a real capacity to pick up on a person’s mood or vibes, so he literally says whatever comes to his head.

What would you say is unique in your paranormal romances?

I tried to make them more character driven and psychological than truly driven by the supernatural components, if that makes sense. In INSIGHT, Nate could barely use his gift. In OVERSIGHT, Holden is a powerful empath but it’s useless to him when it comes to Six since Six has an immunity to psychic powers.

What’s your favorite type of character to write?

Anti-heroes. Characters who start out as jerks and have to be redeemed.

What about your favorite trope?  And is there one you haven’t done yet that you would love to do?

Enemies-to-lovers for sure. All of that tension is delicious. A trope I haven’t written yet but want to is probably some kind of mistaken identity.

You write in different genres, solo and as part of a writing team… How is your process different with each of those?

It’s more or less the same in terms of outlining, but the major difference is that I’m doing all the work and have no sounding board. When writing solo, I rely a lot on betas.

You released MATURE CONTENT earlier this month with co-author Megan Erickson.  What’s your favorite thing about co-writing this series?

It’s just extremely fun and you have a built-in support system with a co-writer. We can worry and angst to each other but also cheerlead each other’s scenes and encourage each other to keep writing.

Tell us one thing you can’t leave home without.

How can we usually find you celebrating a release day?

Uh… sometimes I buy myself a smoothie or eat a nice breakfast? Lol I am boring.

What are you currently working on and what can we expect next from you?

I’m currently working on CITYWIDE—The Five Boroughs anthology. Next up, after Oversight, Is Illegal Contact—the first book in my M/M football series! 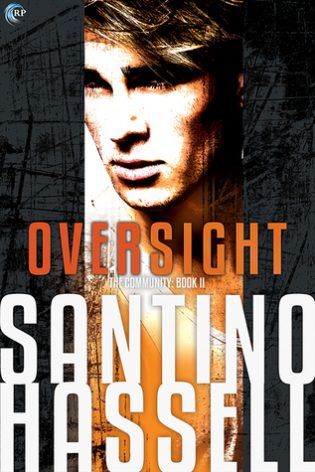 Spoiler Alert! The following blurb contains spoilers for Insight, book one of The Community.

Holden Payne has it all . . . or so he thinks. As heir to the founder of the Community—an organization that finds, protects, and manages psychics—he’s rich, powerful, and treated like royalty. But after a series of disappearances and murders rock the Community, he’s branded the fall guy for the scandal and saddled with a babysitter.

Sixtus Rossi is a broad-shouldered, tattooed lumbersexual with a man-bun and a steely gaze. He’s also an Invulnerable—supposedly impervious to both psychic abilities and Holden’s charms. It’s a claim Holden takes as a challenge. Especially if sleeping with Six may help him learn whether the Community had more to do with the disappearances than they claimed.

As Holden uncovers the truth, he also finds himself getting in deep with the man sent to watch him. His plan to seduce Six for information leads to a connection so intense that some of Six’s shields come crashing down. And with that comes a frightening realization: Holden has to either stand by the Community that has given him everything, or abandon his old life to protect the people he loves.

To celebrate the release of Oversight, one lucky winner will receive a $15 Riptide credit! Leave a comment with your contact info to enter the contest. Entries close at midnight, Eastern time, on July 1, 2017. Contest is NOT restricted to U.S. entries. Thanks for following the tour, and don’t forget to leave your contact info!

Ooh, a Santino mistaken identity story would be fun!

This series sounds intriguing. Thanks!

Thanks for the chat. What’s going to make your football series unique?

Thank you so much for this interview! ^_^

Thanks for the interview!
legacylandlisa(at)gmail(dot)com

Great interview and giveaway! Shared on all my socials!

oversight was soooo good. i love Six so muuuch! i’m also lucky to have read Illegal Contact already and ya’ll will loove it it’s so romantic

Thank you for giving us some insight about thought processes that go into your writing and characters. Good luck with the book.
heath0043 at gmail dot com

Congrats and thanks for the interview. I too like the PsyCop series and anti-heroes. And the idea behind this release sounds creative and it all looks pretty intense, like others of yours I’ve read and thoroughly enjoyed. –
TheWrote [at] aol [dot] com

Can’t wait to read Oversight, but TBH, I’m going to wait for Sightlines’ release so I can read the trilogy, back to back. I’m dying to see what happens within The Community overall, and Insight was one of only three 5-star ratings I ever gave. I figure if I waited this long for book 2/3 in the trilogy, I can wait a few more months and read all 3 books in a row. Cliffhangers kill me, lol.

I’m absolutely loving this series so far! Thanks for the chance!

Thanks for the interview!
bungalowbarbara (at) gmail (dot) com