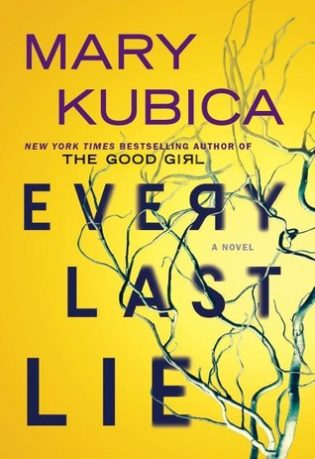 Every Last Lie
by Mary Kubica

“Although I thought Every Last Lie had a disappointing ending, the writing—the twists and turns—made for an emotional roller coaster ride of events. But for me, the ending wasn’t worth the trip.”
~ Under the Covers

Clara Solberg’s life is turned upside down in this psychological thriller. Her husband has been tragically killed in a car accident that leaves more questions than answers for the widow.
Clara has recently given birth to her son, Felix, and has a four year old daughter, Maisie. Maisie survived the car accident and is now plagued with night terrors where she screams out “the bad man” is coming to get them.

What follows is a back-and-forth telling from Clara’s perspective as she deals with the aftermath and from her husband, Nick, prior to the accident, where all the lies he kept from his wife are revealed.

Clara and Nick had a typical, loving marriage—Nick was a dentist who owned his own practice and Clara was the supportive wife. But things start to unravel when Nick treats a patient who doesn’t return for follow-up care after an extraction. The patient gets a life-threatening infection and files a lawsuit. Nick’s patients begin to leave and the bills start piling up. Nick keeps all his financial problems from his wife. Clara already has too much to worry about-her pregnancy and the fact that her own mother suffers from dementia.

From there, the story spirals into an almost unbelievable out-of-control situation. So many secrets and lies of omission that left me shaking my head. Especially with Clara (SPOILER)—who never tells her daughter that her father was killed. It just never made sense to me why she kept up the pretense.

Clara starts to suspect that maybe someone else could be at fault for her husband’s accident. Was it the abusive neighbor next door? The best friend, who, in reality turns out to be a jealous ass? Or someone closer to Clara?

When we get to the climax of the story and find out who is responsible I am left feeling deflated and disappointed.

After all the build-up and shenanigans, my only thought was, “Really? That’s it?”

Although I thought Every Last Lie had a disappointing ending, the writing—the twists and turns—made for an emotional roller coaster ride of events. But for me, the ending wasn’t worth the trip.

Yup, if the ending doesn’t live up to the book, it ruins the experience.

Good review!! Shared on all my socials!