I know you guys have been waiting six long years for this, but finally we have decided to give you, our loving audience, an insight into the minds of the UTC team. Kind of. It all evolved from the idea of us interviewing each other…then we decided, what if we answered the questions for the other person? After all this time together, would we answer the questions correctly, how well do we know each other? Well, we will let you be the judge of that! Here are the questions and answers and our commentary on our answers. Welcome to the insanity of the UTC gals!

Suzanne as answered by Francesca

Without a doubt the author would be Ilona Andrews and the series Kate Daniels. Actually they would just edit Kate’s name as Suzanne because she would take no other role than as Curran’s mate.

Suzanne’s feedback: Haha yes! Francesca you know me so well! Andrews needs to rename the series after me so I can get to my honey bunny Curran.

I definitely don’t think dark, so I’m going with milk. (Man I should know this without a doubt considering all the chocolate I’ve sent Suzanne over the years!)

Suzanne’s feedback: This was such an important question, if I could, I would live off chocolate. Francesca was half right, I eat a lot of milk chocolate but my favourite is dark.

Francesca’s feedback: I know what I’m sending you for Christmas now.

Why bother, they would just f*ck it up anyway!

Suzanne’s feedback: True, very true. There are very few book to TV/film adaptions that I have liked. Why risk spoiling a series I love?

Suzanne’s feedback: Hell. Yeah. Although if they could sneak in the Kate Daniels series as well that would be good!

Suzanne’s feedback: Ah imagine being the filling in that sandwich! Heaven

It’s a toss up between urban fantasy or historical romance.

Oh man this is tough! I have no idea… Hmmmm Lisa Kleypas and Julia Quinn to write the ultimate historical romance, how’s that?

Suzanne’s feedback: That would be good, two of my favourite historical romance authors together. You know what would also be interesting. Nalini Singh to add sincerity and Kresley Cole to add a little earthy humour to take the edge off.

This just makes me think we haven’t talked about food enough lately! But maybe there was a salad involved for lunch.

Suzanne’s feedback: Almost! Pasta salad and it was delicious

More attention than it deserves: Karen Marie Moning Fever series, because the hate for Barrons is strong.
Deserves more attention: Anything by Penny Reid

Francesca’s feedback: I totally need to brush up on my Suzanne knowledge!

Suzanne’s feedback: You didn’t do too badly! The take back from this…Francesca needs to send me more chocolate! ~ Suzanne

Annie as answered by Suzanne

Karen Marie Moning and her Fever series, because I be cray cray and love Barrons

Annie’s feedback: This was an easy one! I love KMM!

Where are the mini eggs in this question

Hmmm I know I sound like I’m repeating myself but…Fever series by KMM. BUT, only if they get it right!

Annie’s feedback: Yes ONLY if they cast my hubby, David Gandy as Barrons. Wouldn’t that be amazing?

Black Dagger Brotherhood by J.R. Ward or maybe the In Death series by JD Robb, if she writes another 40 books I will be sorted for a while!

Annie’s feedback: Dark Lover is my most reread book! And I am still making my way through the In Death series. It’s a long one but so, so good!

Roll up 21st century and gimme my ebooks

Annie’s feedback: My Kindle is my best friend lol

Rhage from the Black Dagger Brotherhood series by J.R. Ward. I refuse to say Barrons.

Hmmm I love me some M/M action but I also have a soft spot for a cozy mystery.

JR Ward and Karen Marie Moning. Can you imagine oooooh all the feels!

Annie’s feedback: I would literally die if this happened.

Do mini eggs count as a meal? I think they do.

Annie’s feedback: They certainly do in my household.

This where it reveals how much of a bad friend I am! I CANNOT THINK OF ANYTHING!!

Annie’s feedback: LOL! This one is a tough one because there haven’t been many standout releases for me but I love Marie Harte’s Contemporaries. She doesn’t get enough attention. 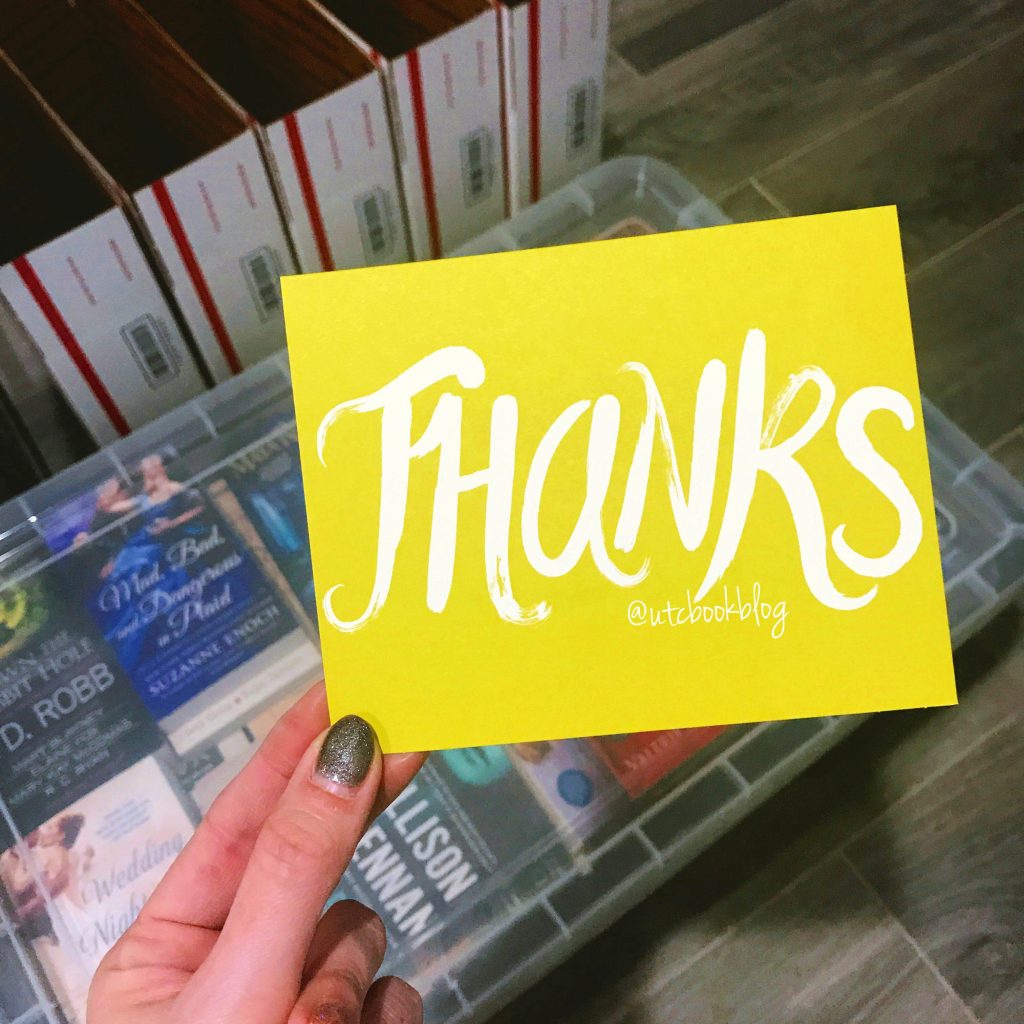 We are celebrating our 6-year Blog Anniversary this month!!!
*throws confetti*

We want to thank you for years of support and hope that we can bring you more hours of good reading in the future.  And what better way to celebrate than with a giveaway??  Stay tuned this week because we will have a new giveaway bundle up for grabs!  Giveaways will be open until the end of the month. 😉

You will receive the books pictured below (at least one is signed!) as well as a UTC t-shirt and some book swag.
This is open internationally! 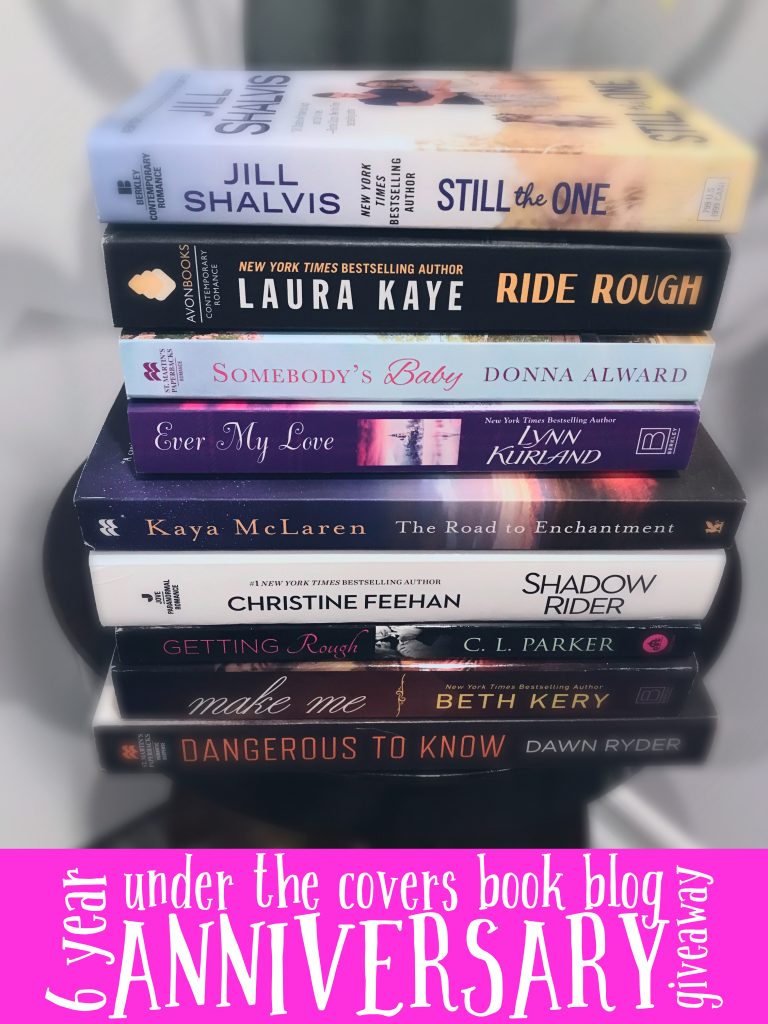 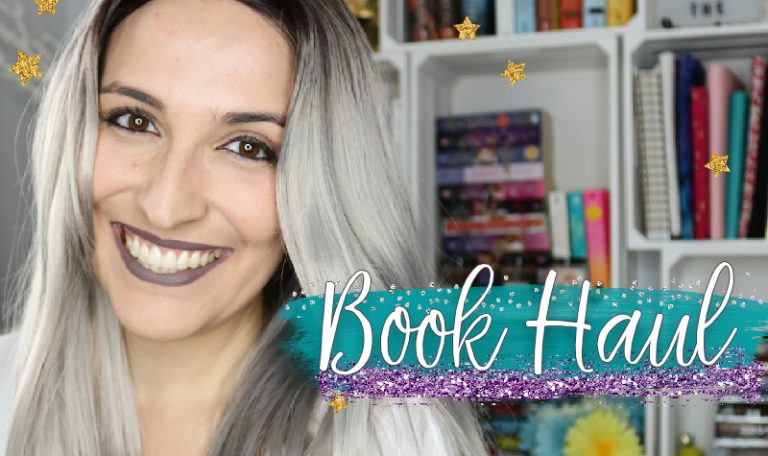 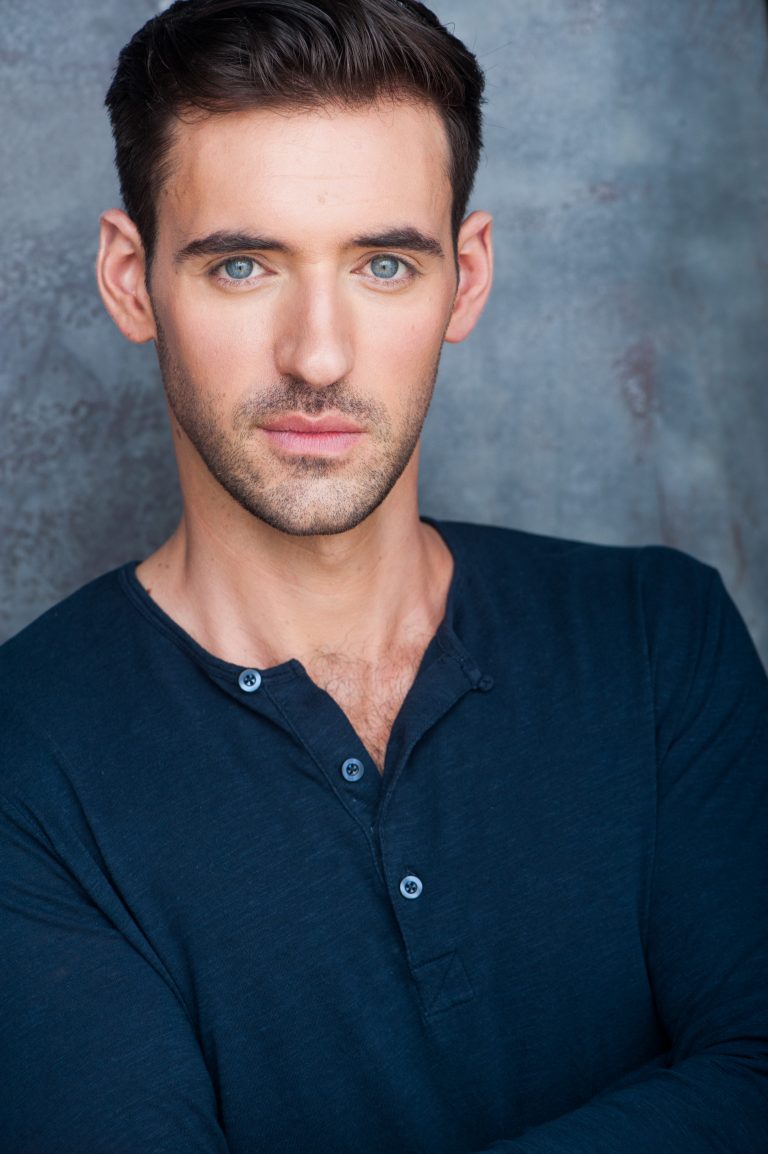 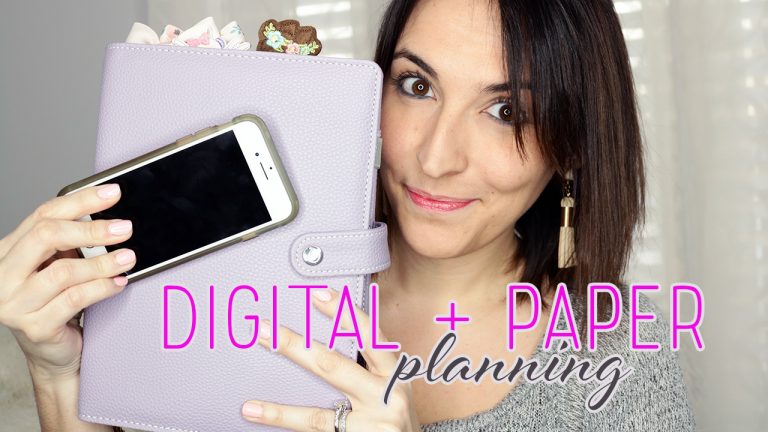 Thank you for this! You rock 🙂

Love the interview’s! A character from a book that I’d love to romance would be Bones from Jeanine Frosts Night Huntress novels! 🙂

This was so much fun! Thanks!

That was entertaining. 🙂 Some of those questions are hard!!

Important question…Chocolate: Dark, Milk or White? dark If you had the choice of any author to write you into their books who would it be and which series? Kristen Ashley – Rock Chick or Colorado Mountain series If you could pick any series to be brought to life on screen which would it be? none, I’m not of fan of tv/movie adaptations they never get them right. Ebooks or Paperbacks? Ebooks If any character could come to life to romance you, which character would you chose? Tate Jackson from Sweet Dreams or Reyes Farrow from the Charley Davidson series Favourite… Read more »

Annie…I HEART you! Lol!!!! I LOVE Rhage but, Butch is my fave…and BARRONS! Yes to Barrons…I can’t see DG being able to pull him off…but, that’s the great thing about imagination! 😉 🙂

Ok, last comment, I swear…I would also die if KMM and JRW collaborated on a book…sign me up…I’ll preorder a signed copy of that baby! I wonder what love child they would create. Oh the possibilities! <3 :O 😀

I would die of happiness if Kresley Cole wrote me in the IAD series. 😀

Great questions and great answers, I enjoyed reading the interview. The series I would take to a desert island is The Bronze Horseman by Paullina Simons

Love the interviews, such fun post! I don’t like milk, so I choose dark chocolate whenever the occasion rises. The darker the better! Lol 😉

I would love to see Pepper Winters and K Webster collaborate

JRW and KMM collaborating??? Can you imagine? *thud* I’d die. Also, Lisa Kleypas and Julia Quinn. I’d die a second time and it would be a gloriously wonderful death. Yes. Just yes.

This was absolutely adorable and super fun, guys! Loved it!

You guys did great with those. I was trying to think how my blogging partner and I would do on this and it would be ugly. LOL. And it was funny b/c I guessed at the answers myself and got some of that right showing you gals are open and friendly about your book love. 🙂

Love this double Q&A!!! You guys are so awesome!!!! Shared on all my socials!!

Character that I would like to be real… Dev from Sherrilyn Kenyon’s Dark Hunters! LOL.

There are quite a few more but he is front and center in Romance!!

This was so much fun! Thanks you guys

DARK LOVER was my first “real ” romance novels I read. And !! WOWZA !! Yep, that book will always be one of my top ten.

Reyes could definitely come to life to romance me!!!

Lisa Kleypas and Julia Quinn writing together? Love this idea!! And I’d definitely bring BDB with me to a desert island too!

what a fun idea, guys, to guess what each other’s answers would be. LOVE IT!!

As a blog you guys are the best ! No BS Ladies. You cover every genre, kudos for your new M/M adventures ! Other blogs just seem to push what the authors send them, you guys love books/ authors and it shows ! Heres to many more years, thank you !

Fun write up!
I would pick dark chocolate…and if it had cherries in the middle that would be even better!

Roarke could come romance me anytime!

So much Barrons hate…I just love him!

I had fun reading this ?

last meal i did and ate: strawberries with sugar
and i love print books

If any character could come to life to romance you, which character would you chose?
Gideon Cross from Crossfire Series by Sylvia Day!
Great interview!!!

The series I would take to a desert island would be Rock Chick’s by Kristen Ashley. And prefer ebooks cause easier to take a bunch of books somewherr

Love the interviews. That was so much fun. The question I’ll answer is” If any character could come to life to romance you, which character would you chose”. I would choose Dragos from Thea Harrison’s Elder Races series. Yum!

My favorite genre is PNR/urban fantasy.

I’d love to see K. Webster and Ker Dukey team up again for more darkness – heck, I even like my chocolate dark.

Right now my favorite genre is paranormal romance. I read that more than anything else.

What a fun Q&A 😀 🙂
If you could pick any series to be brought to life on screen which would it be?
Dark Hunter Series by Sherrilyn Kenyon 🙂

If you could pick any series to be brought to life on screen which would it be?
Sempre by J.M. Darhower <3

Last meal you made?
I love cooking. Last meal I made was Binagoongang. It’s a Filipino dish.

I know we are rolling in 21 st but still… paperbacks for me.