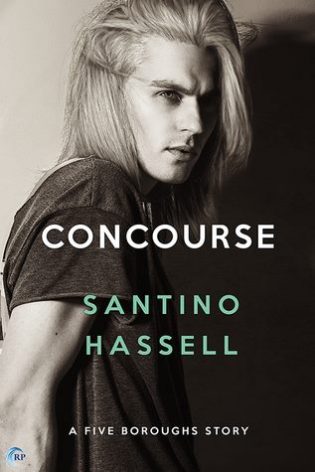 “…although I enjoyed CONCOURSE, it didn’t have me turning the pages as fast as I wanted.”
~ Under the Covers

I’ve been a fan of this series for a while.  It was how I discovered the gritty and awesome writing of Santino Hassell.  Some books have been better than others but for the most part I’ve enjoyed the offerings from these NYC boys.  CONCOURSE was a bit different.  I was expecting to really like it because I kind of love the stories about the twink and the jock stereotype and if someone is able to turn all stereotypes into something amazing is Mr. Hassell.  But although I enjoyed CONCOURSE, it didn’t have me turning the pages as fast as I wanted.

I liked the characters individually.  Ashton is a rich kid who found fame through social media and a leaked sex tape.  He’s never had the love and respect of his family, or anyone really for that matter.  Except the one friend he had from childhood.  Valdrin.  He was the nanny’s son and grew up around this rich family, but always had a connection with Ashton.  He’s now a struggling aspiring boxer, without much money, and carrying a lot of guilt and responsibilities on his head.

I was expecting this to be explosive because the setup for these two was amazing!  On their own, I really liked their characters and when they were together I could feel the chemistry as well.  But the mechanics of how they got together and some of the miscommunication issues were getting to me.  I just didn’t understand why they were making everything such a big deal, why Ashton kept falling back on his old ways and making bad decision after bad decision.  Why neither one of them was really fighting to get the other one to stay in their lives!  I wanted them to want it more.

But aside from that complaint which just slowed down my reading this some, I always enjoy Santino’s books.  His characters are full of flaws and I love that about them.  This was one that felt a bit more tentative in how they approached each other and maybe not as gritty as I was expecting but a good addition to the series nonetheless.

Thanks for the review, I have the first few books on my TBR pile.

Miscommunication is such a turn off for me in stories when a simple discussion could’ve solved it.

I hate dragged out miscommunication it irritates me to no end. Thanks for the review Francesca