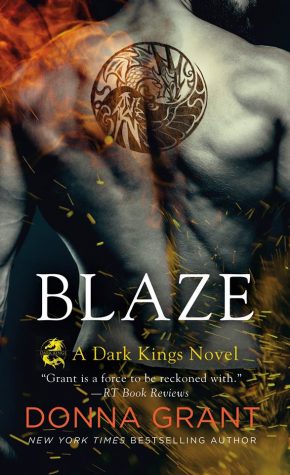 “BLAZE totally exceeded my expectations.”
~ Under the Covers

BLAZE is book eleven in the Dark Kings series. I can’t believe how many books are already out in this series. Somehow, Grant has managed to keep this series feeling fresh and interesting and I especially think she did a good job with this book.

I’ve always said Grant’s heroes are especially delicious in this series and Anson is no exception. As a fierce Dragon King, he is everything that you want in a hero. And yet, this unstoppable man requires the assistance of a human female named Devon Abrams.

Devon had no idea that her work life is steeped in the magical world of Fae. Out of the entire series so far, I think Devon might actually be one of my top favorites. To me, she was the most unique and the most independent. I loved that she is so career-oriented but still had that balance of personality to her. The blog aspect was really cool to read and I thought it added a fresh touch to the series while giving Devon’s character a lot more spunk and personality. There aren’t many heroines who think like Devon does so I found her especially refreshing to read about. I actually think the main reason why I enjoyed this book so much was because of her. So kudos to Grant for creating such a unique and fun character.

Of course, there’s plenty of worldbuilding and progress made in this book. If you’re a fan of Lara Adrian’s Midnight Breed series then you will probably enjoy this one as well. They have the same level of worldbuilding and frequent cameos from other characters in the series, so that being said, I would highly suggest reading this series in order.

BLAZE totally exceeded my expectations and I definitely think the Dark Kings series is one of the best Paranormal Romance series out there right now.

Thanks for the review! This sounds awesome like all Donna Grant!

She does write awesome heroes!

Yes! This one was great! Devon is a great character for sure.

I thought she was really special. Definitely my fave part of this book!

Awesome review!!! The dragon king series is one of my faces!!! I love how Donna puts in past characters too!!!! Love this cover!!! Shared on my socials!!

Yes, that’s what makes this series so good. It’s a family.

Thank you so much for the amazing review, Annie. 🙂