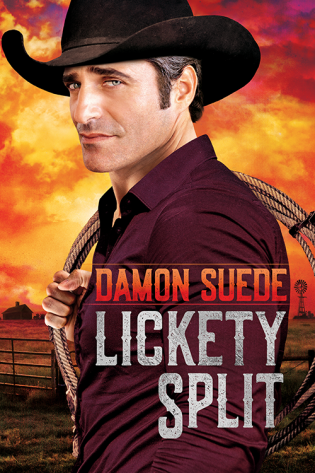 Patch Hastle grew up in a hurry, ditching East Texas for NYC to make his name as a DJ and model without ever looking back. When his parents die unexpectedly, he heads home to unload the family farm ASAP and skedaddle. Except the will left Patch’s worst enemy in charge: his father’s handsome best friend who made his high school years hell.

Tucker Biggs is going nowhere. Twenty years past his rodeo days, he’s put down roots as the caretaker of the Hastle farm. He knows his buddy’s smartass son still hates his guts, but when Patch shows up growed-up, looking like sin in tight denim, Tucker turns his homecoming into a lesson about old dogs and new kinks.

Patch and Tucker fool around, but they can’t fool themselves. Once the farm’s sold, they mean to call it quits and head off to separate sunsets. With the clock ticking, the city slicker and his down-home hick get roped into each other’s life. If they’re gonna last longer than spit on a griddle, they better figure out what matters—fast. 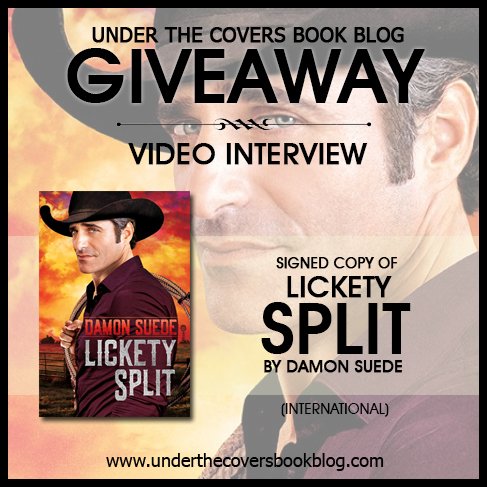 Thanks so much, Latifa!

Great interview!! ,shared on all my socials!!

Awesome. Many thanks for helping to share our shenanigans. Fran suggested a video interview and we had SUCH a blast shooting this at the Liberty States conference… 🙂 She’s so groove-tastic.

Sub genre slut!!! Omg I love you, Damon! I was born in Texas. I rebelled against all things Texas as a teen as well. Now I love it. Not as much as my beloved New Mexico, but a lot. Such an incredibly rich history.

Thank you for this interview. SO FUN! Reading Lickety Split now and loving it.

Oh sweetheart! And I love YOU! Thank you so much for the kind words. Beyond psyched that you’re digging the book., especially since you’re a Texan yourself… I can’t believe we’re both Lone Star refugees who made our peace with the craziness. LOL That is fabulous. 😛

Love the interview. Thanks!

I’m not normally a big Western gal (even though I had a Texan grandpa, maybe that’s because he left for California as a teen), but I adore Damon’s books and have been wanting this one for ages!

A fun interview thank you.

Love the video . Living in Arkansas, I’ve always been told that I talk fast as well. It’s hard to remember to slow down when speaking. Lickety Split sounds like a really good book. Will add it to the reading list.

Congratulations on the new release.

I appreciate you giving it a go, Elizabeth. 🙂 Hope you enjoy!

You know I love you when I actually watch a video interview. I’m very anti-video book reviews and won’t watch them on principle; I also refuse to listen to podcasts. I want to READ, damn it! Especially ABOUT books! But, since it was you, and after learning about the Circuit and other things from your tour, I decided to watch. You remind me of my son with the fast speech; I often have to seek clarification of what he just said. It seems to be a trend around here though among *ahem* younger people, to talk a mile a minute.… Read more »

Enjoyed your video. Can totally relate to speaking too quickly. I had extra-curricular speech therapy from kindergarten through 6th grade. Have a natural space between my front teeth. and it took some effort to learn to speak concisely. Once I mastered clear speech, my rate of speech accelerated. As a family, we were involved in the arts, and I attended drama classes and performed in local theater during my adolescent years which was another form of speech-therapy. Forced me to slow down and focus, but didn’t really slow me down offstage. (Taught me to project my voice, so I could… Read more »

Hi, Damon! It was great interview. ^_^ I agree with your description of Tucker. I call it as EFFORTLESS STRONG PRESENCE. *grins* It’s hard not to be attracted to him! He’s just sexy inside & out. Never did I think of the title the way you described other people thought about it. It makes sense, tho. Lick, split. Lickety-split means immediately that’s why it’s so perfect for the book. And man, were you ever right about Janet. That woman has a dirty mind. LOL! And the “mud” you were talking about? WHOA! It was just SO FREAKIN’ HOT! *fans myself*… Read more »

enjoyed it and cant wait to read this story

I am so excited to read this book! Best wishes for many, many sales!!

Great interview and thanks for the giveaway

These interviews are so much fun, thanks a lot! I’m looking forward to reading & discussing Lickety Split in Heidi Cullinan’s Book Club next weekend!

I loved your interview. I was – mostly still am – a fast talker. My Grandpa used to call me a sewing machine. I had finished reading Lickety Split about an hour before I saw the interview. That was great to hear about the book right after I read it.

Damon Suede is so cool. I loved hearing about why he made the decisions he made for his characters.

Loved this book so much Damon. Born and raised and still living in Texas, I could so relate to the narrow mindeness of some people in this state. I loved the contrast of these characters, but also the way they brought out the best in one another and don’t get me started on Janet. She is one of those secondary characters that are so pivotal to a story.

Thanks for the post, I was able to get my library to purchase this ebook but someone beat me to it so now I’m on the waitlist.

I liked it, I had fun watching it.