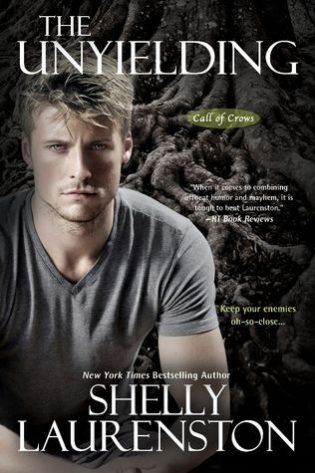 The Unyielding
by Shelly Laurenston

In the third book of the Call of Crows series we have the final battle with the unstoppable goddess trying to bring forth Ragnarok aka the end of the world. But, there may still be a chance for the clans to prevent it, and kill the unkillable. It all relies on Erin Amsel, which is almost as terrifying as Ragnarok itself. Erin is a troublemaker, there isn’t a single deity she’s met who she hasn’t pissed off in some way. Yet her fearlessness and cunning is exactly what they need, especially when paired up with the perpetually angry Stieg Engstrom. What could go wrong?

I am writing this review with a tonne of bias weighing me down, I have been reading Laurenston for years. I first picked her up when she released the Magnus Pack series, which was a breath of fresh air in the Paranormal Romance genre. However, that was decade ago (quite literally!) and her writing and characters have become less fresh with each regurgitation. When I read The Unyielding I felt like I could anticipate the jokes, the characters and the general storyline after the first chapter, and I was right. This is why I am bias, if this was another author I would have liked this book more as perhaps I wouldn’t have found it quite so boringly predicable. But for me it was the same jokes and same type of characters that I have been reading from Laurenston for years.

But, I still gave this a respectable 3.5 stars because as much as I found it a little predicable this is still Laurenston, and does know how to write an engaging book. This book is fairly light on romance, although it is an element, instead this concentrates on the story line and getting the sword from the magical realm to destroy the big bad goddess. Yes, it sounds trite but it’s actually quite exciting when you are reading it. Erin and Steig make the adventure a lot of fun; Steig’s stoic nature is a perfect foil for Erin’s wildness, both in their romance and how it ties in with the quest.

If you like your romance heavy on adventure and humour this book is for you, despite my earlier whinging Laurenston is a quality author who produces some great books. If you haven’t read Laurenston before, I recommend you try the Magnus Pack series I mentioned earlier first. It doesn’t really tie in with this series, but it’s just a great paranormal romance!

Thanks for the review, Suzanne. I am dying to get to this series. I have them all. Just too little time. But it’s way up there on my TBR list.

And this is the great fear of all authors: to become predictable. Oy! Keeps us up at night, let me tell you. I hope her next book surprises your socks off!

You will have to let us know what you think. I read this series half out of sense of loyalty as I have been a fan for a long time, but also, despite my whinging, there is something comforting in going into something knowing exactly what you are getting.

Lol! I will keep my fingers crossed!

Thanks for the review, I’m listening to the audio book right now.

How are you finding it?

I have the mane event on my tbr. I hope to get to it soon.

I liked the Mane Event! You should definitely bump it up the TBR and try it.

Great review,I love this writer too!! ,shared on all my socials!!

I have never read Shelly Laurenston, but I am really curious about her books. I’m generally not too into paranormal romance, but I have read a few last year that I enjoyed. I really need to give this author a try.

I’m sorry that this didn’t feel as fresh.

It’s always a gamble giving new authors a try. But if you like your romance with that extra bit of humour and bit then you should definitely give Laurenston a try, I would start with her earlier books though.