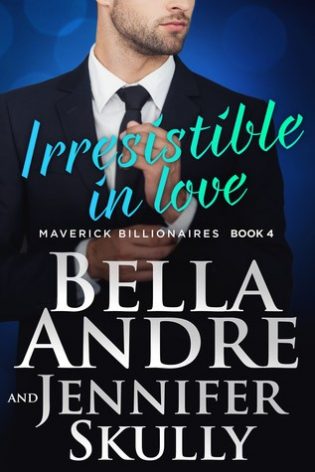 “The romance moves at a good pace and by the end of the book, you really feel like Evan and Paige are meant to be together.”
~ Under the Covers

IRRESISTIBLE IN LOVE is the fourth book in the Maverick Billionaires series by Bella Andre and Jennifer Skully. This is Evan Collins and Paige Ryan’s story. Now these two have an interesting connection. Evan used to be married to Paige’s sister but when she deceives him, Evan doesn’t look back and leaves her. Now he’s got his eyes on her sister, Paige, believing her to be the sister that he should’ve married to begin with.

When I started to read this book, I really wasn’t sure how I felt about the conflict of this story. I’m not the biggest fan of a hero going after his ex-wife’s sister. It just doesn’t sit well with me. But I tried to look past that because Evan is a really nice guy and Paige is a sweetheart. As you can expect, Andre and Skully write pretty straight forward with this novel. They do a great job of setting up the conflict and then immediately building on the romance between Evan and Paige.

I did feel like it was almost too easy though. I don’t usually expect a lot of tension or heartbreak in Andre’s books so I can see that they were trying to do something different here with this one. However, if you’re going to have a conflict like this, I did kind of expect a little bit more angst from Evan.

After he left Paige’s sister, he seems perfectly fine. Almost too fine. And the first time he sees Paige again, he instantly thinks “I married the wrong sister.” Doesn’t that sound like instalove to you? So while I wasn’t the biggest fan of the premise of this book, I still enjoyed Evan and Paige together.

The romance moves at a good pace and by the end of the book, you really feel like Evan and Paige are meant to be together. There are some sweet and sexy moments thrown in and also some great group scenes with some of the other characters. So while initially I was a little skeptical, Andre and Skully did win me over.