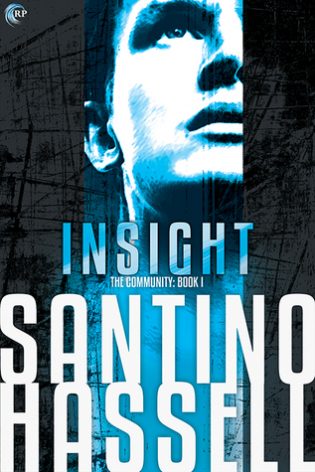 “I found the world darkly seductive.”
~ Under the Covers

I was really excited about this book because I do enjoy the darker feel to Santino Hassell’s paranormal stories so I wanted to read more.  This is the start of a new series and I found the world darkly seductive.  We have a family of psychics living in Texas.  Our main character, Nate, has been shunned by most of the towns people by either being gay, being weird or a freak (due to his psychic abilities he’s trying to hide) or his strange family that is plagued with mental illness and alcoholics.  When he finds out his estranged twin brother supposedly killed himself in New York, he knows there’s more to it than that because of visions he’s having and decides to go on a search to uncover the truth about his brother’s death that takes him to New York and straight to The Community.

There is a cool similarity between The Community and some things about Scientology.  It’s even compared in the book and I think that comparison is quite spot on.  It was fun to see this entwined with the paranormal, psychic elements of the story.  I was invested in the story because of the story.  The characters?  Well, I liked them individually but I’m not so sure on the romance aspect as much.  Yes, there’s chemistry and attraction but I don’t know if it went past infatuation or insta-love for me.  I wanted a bit more on that.

The mystery of Nate’s brother’s death is unfolded nicely and kept me turning the pages to find out what happened.  Anxious and interested.  So that is one thing that will keep me coming back for more of this world.  And we have some open ended issues going on with The Community that I can’t wait to find out more about as well.  All in all, this is a good first book in the series which captured my attention about this new story but didn’t quite deliver as much as I wanted on the romance end.

Maybe the romance will develop more over the next few books, unless it’s a completely new couple. I read this author for the first time recently (not this book,) and really loved it. I hope to read this one eventually.

Under the Covers Book Blog
Admin
Reply to  Angie @ Ba_BAMB

I love Santino Hassell! Hope you get to read this one soon as well. It will be different couples with each book for this series.

I’ve been reading reviews for this first book in Santino’s new series and a common issue seems to be the lack of heat in the romance between the MCs. I’ll be reading this with the expectation of good story telling more than a tale of romance, I think. I typically prefer lots of smexy times so if I approach this book differently maybe I won’t be disappointed. ? Thanks for the review, and I’m adding this to my growing TBR shelf.

I’m liking the sound of some aspects of this book, I’ll have to check it out. Thanks for sharing your thoughts Francesca