Once again, I was lured in by a pretty cover.  I didn’t even read the blurb!  Plus I’ve had such luck lately trying new historical romance authors that I thought I’d give this a go.  The great thing about this story is that I had no trouble jumping right in even though this is book 3 in the series. This was a fun take on the classic trope of the heroine disguising as a man and meeting the hero under those conditions.

Rosamund is disguising as Ross Carrow and helping her brother in their family law practice.  Her brother stutters under especially stressful situations and never had to appear in court because their father was always in charge of that.  After his death, Rosamund steps up for a short time to finish off their current case load and be the one in the courtroom representing their clients.  Good thing she always had an interest in the law and a very sharp mind.  In her first case, she defeats the unbeatable Lord Byron and catches his interest.  He quickly figures out Ross is actually a woman and a lot sexy shenanigans ensue.

I really liked Rosamund’s character.  I love smart heroines and she has a quick mind and a witty tongue.  She is killer in the courtroom but also never backs down from the otherwise intimidating Lawrence.  Even if she’s enamored with him and his good looks.  But at the same time, she is also strong enough to make a decision to get involved with him knowing there could be no future for them.  They come from such different classes and a fairy tale ending isn’t in her cards.  But she still chooses to take what she can get with the man she wants.

Lawrence on the other hand was not as spectacular for me.  He’s more of a beta hero, which I’m ok with, and he is pretty hot.  But there wasn’t anything that was jumping off the page and captivating my attention about his character.  I thought he was even a bit inconsiderate and selfish at times, just taking whatever he wanted only to be redeemed in the end by a grand gesture.

Another thing I liked was the fact that it shows the lack of choices for women in those times.  While Rosamund loves practicing law and is really good at it, she’ll never be able to fulfill that part of her life and this taste she got is more than she could hope for.  It was hard for me to understand how there was a resignation that it was just something she could never have, and she would be happy with other things in her life.  That speaks of the great strength of those women who wanted more for themselves but often society put a stop to their dreams.

While this was a fun read, I’m not sure I’ll be rushing to get the next one (or back one) based on this read.  But I can be persuaded again by a pretty cover 😉 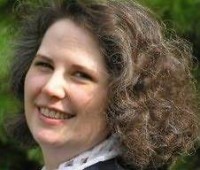 New York Times and USA Today bestseller Tracy Anne Warren is the author of more than a dozen Regency historical romance novels and novellas. She penned her first manuscript at age 17. After earning a Bachelor of Arts degree in history from The Ohio State University, she worked for several years in finance before finally achieving her dream of publication.

Her debut novel, The Husband Trap, was an instant success, landing on the USA Todaybestseller’s list and garnering acclaim from both readers and critics alike. A recipient of the romance industry’s prestigious RITA® award, Warren's subsequent novels have continued to earn praise, while delighting and entertaining her growing circle of fans. She is also the winner of the National Readers’ Choice Award, the HOLT Medallion, the Golden Quill and several other writing awards and honors.

Warren lives in Maryland with a small but exuberant clowder of Siamese rescue cats. When she's not busy writing or enjoying the antics of her cats, she loves watching movies, expanding her music collection and, of course, reading romance novels.

Lol it really is a struggle not to fall for a pretty cover. Thanks for sharing your thoughts Francesca

I thought this was an enjoyable read, but the first one (the one with the cover that is the least attractive) was the best, IMO. If you do decide you want to give the author another go, I highly recommend it! 🙂

Thanks! I may try book 1 and see from there.

I am a sucker for pretty historical covers as well, I actually love the cover on the first book! I will definitely read the series in order. I just need to catch up! thanks for the review.

One of my favorite tropes!!!