Ryan paced the aisles of the grocery store. This afternoon he’d remembered something Emma had said to him a few weeks ago at Off-the-Grid, about how she wanted to have the kind of sex she’d only read about in romance novels. He had no friggin’ clue what kind of sex people had in those books, and he sure as hell couldn’t ask anyone about it so he was just going to have to wing it. Because he wanted to be the man who gave Emma the kind of mind-blowing sex she’d only read about.

And that was why he found himself at the grocery store after he’d left Off-the-Grid, shopping for “accessories” for his evening with Emma. If Ethan or Mark saw him now, he’d never hear the end of it. He paid for his purchases and left quickly, tucking the bag into one of the saddlebags on his bike before heading toward Emma’s apartment.

He was feeling all sorts of things as he rode toward her building. Desire. Excitement. And a small amount of trepidation that things wouldn’t be the same here on their own home turf. That he’d violated some kind of bro code by sleeping with his best friend’s little sister, the same sister Derek had warned him to keep his hands off of.

All of that faded away when he pulled into her driveway and saw her standing there in the doorway, wearing a white tank top and a striped skirt that sat low enough on her hips to show off her new tattoo.

His. She was his, and she was perfect.

He walked to her and pulled her into his arms. “Hey.”

“Hi.” She twined her hands around his neck, smiling up at him. “What’s in the bag?”

“I’m intrigued,” she said, peeking down at the plastic grocery bag in his right hand.

He stepped her backward through her front door and closed it behind them. “That’s better.”

Then he set the bag down and flattened her against him as he lowered his mouth to hers. Her lips parted, inviting him inside, and damn, he was lost. He kissed her until all the chaos in his brain had stilled, replaced by the fire Emma had ignited inside him. This woman. Would he ever get enough?

“Okay, I’m curious,” Emma said when they’d come up for air. She bent down to pick up the bag, poking through it with a big smile on her face. “Whipped cream. Chocolate syrup. And champagne. Well, well, what did you have in mind tonight, Hot Stuff?”

What he might have gained in intent, he definitely lost in presentation. Dropping a plastic shopping bag of sex foods in her foyer was definitely not how the guys in her romance novels did it. He scrubbed a hand over his eyes. “Um—”

“For the record,” she said as a smile played around her lips, “whatever it is, I am definitely interested.”

Excerpt posted in arrangement with author 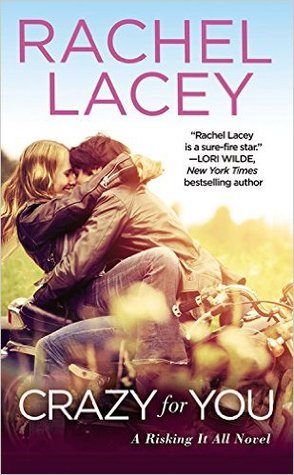 SHE’S TAKING A WALK ON HIS WILD SIDE

Emma Rush can’t remember a time when she didn’t have a thing for Ryan Blake. Haven’s resident bad boy is just so freakin’ hot-with tattoos, a motorcycle, and enough rough-around-the-edges sexiness to melt all her self-control. Now that Emma’s over being a “good girl,” she needs a little help being naughty . . . and she knows just where to start.

Before Emma’s brother enlisted in the military, he made Ryan promise that he would protect her from everything–including himself. When her brother doesn’t come home, Ryan needs to turn his screwed-up life around to honor his pledge. But he knows he’s still not the right kind of guy for someone as sweet as Emma. Only he can’t stop wanting to be with her. Wanting her. Falling in love with a good girl may be the craziest risk this bad boy can take . . .

Rachel Lacey lives in North Carolina, with her husband, son, and their own rescued pup. She volunteers her spare time with Carolina Boxer Rescue and truly has a passion for helping our furry friends. She is a member of the Romance Writers of America as well as her local Heart of Carolina RWA chapter. Keep up with the latest news at rachellacey.com.

Shared on all my socials!!

That excerpt was too cute and kinda hot!