Welcome back, Kim, Thank You so much for coming to Under The Covers Book Blog. Congratulations are in order, Montana Mornings release next week, February 28th, 2017.

Thanks!! And thank you for having me back. I always love hanging out with you 🙂

For those who are not familiar with your work, tell us a little about The Wildes of Birch Bay series.

Sure! And can I say that I seriously love writing this series?!? The Wildes of Birch Bay is my definition of a big family drama. I have the Wildes—6 grown kids, one dad, one step-mother, and so far, two gorgeous little girls. And I have a family cherry orchard, set around Flathead Lake, found in northwest Montana. And then I have dysfunction. The Wildes’s late mother was heavy on the narcissism, and that behavior affected everyone in her family differently. Book one is Montana Cherries, where we learn about the family and the mother. It’s Dani’s story. She’s the only girl, and the oldest in the family, and she stepped in to help finish raising the boys after her mother died. Then we have Montana Rescue, which features one of the twins, Nick—who’s a rodeo star—and his unrequited childhood crush, Harper. I seriously love both those books, but Harper and Nick still get me every time I think about them.

And third—which is this book—is Montana Mornings. This is Gabe’s book. He’s the oldest son, only a year younger than Dani, and he’s just coming out of a marriage where he essentially married someone just like his mom. Personality disorders like narcissism can really screw with the kids, and my Wildes are no exception. Gabe moved to California in a previous book, hoping to save his marriage, but he’s back home now—as a single dad—and he and his daughter are both struggling to deal with the impending divorce in a healthy way.

Of course, this series isn’t all doom and gloom. As I do with all of my books, I’ve worked in humor, a light-hearted tone, and plenty of fun sexy times 🙂

Which book was the hardest to write and which the easiest?

Hardest? Montana Mornings. No question. I wanted Gabe and Erica to just be “normal” in this book. Or, at least, seeking out normal. In Cherries, Dani had huge aspirations, and Ben was a world-traveling photographer. In Rescue, we had Nick the bull rider, and Harper who flies helicopters for a living. She’s been in the army, doing search and rescue, and she’s lost a LOT in her life. So for Gabe and Erica, I just wanted “normal.”

They’re both school teachers. They’re not seeking fame and glory. They just want to live a quiet life, raise a family, and feel secure in someone else’s love. But I’ll tell you, I learned that normal isn’t always so easy to write! Lol.

I love them both, though, and I’m glad they finally found what they needed to make them whole.

What’s your favorite thing about the hero and about heroine?

Gabe: I love that his daughter comes first. He’s a stubborn, oldest-male-in-the-family hard-headed man, and that drove me crazy at times. But he’s determined to make sure his daughter has all she needs to thrive and grow up without the crazy that he endured.

And Erica . . . I love that she’s normal 🙂 Seriously. She just wants to be a nice, quiet school-teacher, and she wants to be the best one she can possibly be. Her two-timing slime of an ex ripped her world out from under her in the past, and it broke my heart for her. She didn’t deserve it. But at the same time, she deserved so much more than her ex. I love that she sees the good in people, that she never gave up on Gabe, and that she knew when to butt out and let him figure out his own life. Just like she had to figure out hers.

What was your favorite scene to write?

Oh. That one’s tough, because I just wrote a scene in a new book, and that one might be my all-time favorite! But with Gabe and Erica . . . I guess I have two. The first one is with Erica and her sister, Bree. I’ll just all it my “little dick” scene. Bree turned out to be such a fun character, and any time she showed up in a scene, I couldn’t wait to see what she’d do or say next.

But I also love a scene late in the book with Gabe and his daughter. I’ll just call it the pancake scene. It’s a huge moment for those two, and that’s really all I’m going to say about it. Don’t want to give out any spoilers, you know.

You mentioned this book’s connection to a book club you are friends with. Can you tell us more about that?

Sure! I live just outside of Nashville, and when Montana Cherries came out in 2015, I worked with a friend to get a couple of book clubs in the Huntsville area to read it. They invited me down the month they were going to discuss it, and I had a great time hanging out with them. I ended up in the Huntsville area months later (right after Montana Rescue came out), and when I realized it was book club day, I once again showed up to say hi and ended up going to lunch with everyone. They are a wonderful group!!! They ask fantastic questions about the books and about writing, and when I tossed out my own questions (concerning future books and what they might like/not like to see), they had a ton of great ideas. One of the ladies also has a very unique name, and when I asked if I could use it in this book, she quickly gave permission. So as I was finishing up Montana Mornings, and trying to decide who I wanted to dedicate it to, this group naturally came to mind. I wish I could hang out with them every month!

How will you celebrate release date?

I’ll be flying to Shreveport, LA to hang out with some super writer friends of mine at a cabin on the lake. Champagne will be had, probably chocolate, and no doubt lots of laughs and good times. I’ll finish that trip by presenting a workshop at the NOLA Stars conference later that week, but I love that the timing allows me to celebrate my release day with a couple of close friends.

I’m currently working on edits to book one in a new series set in Texas. I don’t have a definite title or series name yet, but I call it my female-construction-crew series. Bluebonnet Construction is an all-female company, owned by three women who grew up in foster care together. And these women are taking Red Oak Falls by storm! 🙂

Can you show us your working space? Maybe a tour of your bookshelf?

I would love to! I moved into a new house last year, and this house has all kinds of space for me to write in (as you’ll see from the pictures, I prefer to write while tucked away in a corner somewhere). The walls are still a little bare, but that’s mostly because I like it that way—I can’t handle clutter when I write—and honestly, I just haven’t had time to find too many things that make me smile when I see them on my walls.

Here are a few shots of my office, other spaces (corners) I write in, as well as my swag closet 🙂 I LOVE my swag closet! It was one of the requirements in the new house.

Enjoy! (And thanks again, Angela, for having me back!!) 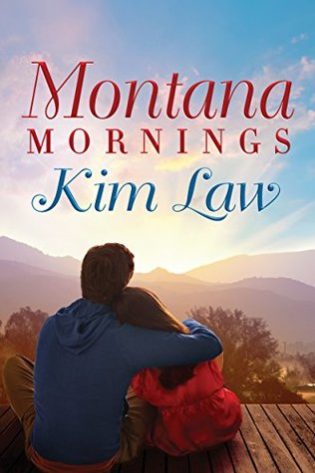 Gabe Wilde has never been more ready for a change. Thirty-three and in the midst of a divorce, he’s packed up his second-grade daughter and come home to Birch Bay, Montana. New house, new career, new life. Only, with changes come stress. His daughter is struggling with the transition to their new norm—and Gabe is out of ideas as to how to help.

Erica Bird is mired in her own worries. After impulsively leaving the teaching job she loved, she may finally be free from her cheating ex, but separated from her family and everything she’s ever known, second guesses linger. Substitute teaching in Birch Bay is fine for the time being, but what will her future hold?

When Gabe’s daughter winds up in Erica’s class, the two meet—or rather, reunite. Neither has forgotten their college romance or the tender feelings they once shared, but will their complicated pasts destroy their second chance? Or will old desire lead to a new love when each needs it most?

Oh my…must read! Love the interview and office tour! Thanks ever so!

Hi Kathleen! Thanks 🙂 I’d hoped to do a v-log tour of the office, but ran out of time. Hopefully it was self explanatory 🙂

Great introduction to this series! Thanks.