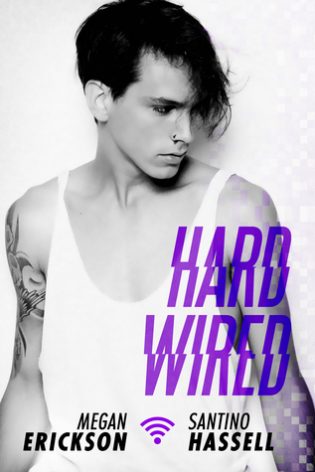 “It was witty, sexy, thoroughly geeky and I loved every second of it.”
~ Under the Covers

I stumbled across this series when the first book came out and I have to say, it’s quickly become one of those must read ones for me.  HARD WIRED was one I was anxiously awaiting for since I saw that beautiful cover and I gobbled it up almost in one sitting (ok, maybe two because I HAD to work).

If you’ve been following this series, you’ll be familiar with the mods on Kai’s Twitch channel, Cherrycakes and Garvy.  We’ve all been led to believe that Cherrycakes is a perky anime loving female, but that is not quite the truth.  She is actually Ian.  And sometimes, Cerise.  And the truth will be revealed when he has to sit at a panel with Garvy while filling for Kai.  The fact that he’s had a huge crush on Garvy since forever is not helping matters, and keeping his two very different personas separate will prove hard to deal with.

HARD WIRED was wickedly addictive.  There’s just something about the characters and the writing in this series that draws me in, and this book was no different.  They’re outcasts, have anxieties of their own to deal with and still have some growing up to do.  These are not perfect characters, but I think that’s what I like about them the most.  They make mistakes and stupid decisions.  They could be dealing with other things a bit better, but really they don’t have the best of guidance.  But I love how they still try to push through and go for their goals.  All that, while dealing with their feelings and falling in love.

I can’t say I liked one more than the other.  There’s an individual strength to both Ian and Jesse, and I loved how it started coming out more when they were together.  They are truly good for each other!  And, let’s be straight here, they are also SO HOT TOGETHER!

While I still think that FAST CONNECTION is my fave of the series so far.  This is another great installment in this series.  It was witty, sexy, thoroughly geeky and I loved every second of it.  I’m left so excited about a Zane and Beau book because I can just imagine what shenanigans will ensue when those two polar opposite divas have to deal with each other. 🙂  Bring it on!

My first stories written in crayon-scrawl on loose-leaf notebook paper were about my childhood pet — a deaf cat with dandruff. And after covering real-life dramas as a journalist, I decided I liked writing my own endings better and switched to fiction. My romance novels full of humor and heart are a far cry from those early scribblings about my hygiene-deficient pet.
I live in southern Pennsylvania, with my husband, two kids and two cats. I like a good pint of beer, a greasy bacon cheeseburger, homemade mac and cheese, and a great book with a happily ever after. When I’m not tapping away on my laptop, I’m probably listening to the characters in my head who just. Won’t. Shut. Up.

I like that they were strong on their own but also made each other stronger.

Looking forward to reading this book. Thanks for the review Francesca

Nice review! This series is on my TBR list, after I finish Santino’s 5 Boroughs. I’m late to both series, as usual and on purpose, because I get to binge-read without waiting between books as a result, lol.

What I Read in March | Francesca's Wrap-Up

Happy Friday! What are your plans for the weekend