Welcome to Under the Covers, Armen! First off, let’s get to know you a little better. Tell us five fun facts about yourself that readers wouldn’t know.

Thank you so much for the welcome! I am a very adventurous eater and will try anything at least once; I had poached sea cucumber recently…and while I will not be trying it again, I recommend you give it a go, if the opportunity presents itself. I also love to cook, a passion and skill set I inherited from my mother. My first paid job in Los Angeles was for a print ad; I sat in a rowing shell (which was tied between two posts so that it wouldn’t go anywhere) in a body of water too small to actually row in, and pretended to pull very hard so that it would look like I was a badass in the middle of a race. This was a very fitting introduction to the entertainment industry. I actually rowed in high school and college. And for Fun Fact Number Five…I am completely addicted to Wikipedia and can waste hours at a time learning about increasingly obscure events, organizations and individuals.

How did you get into narrating audiobooks?

I have always enjoyed audiobooks, but until smartphones (and in particular: Audible) came around, my listening was limited to long family road trips. But thanks to the aforementioned smartphones and Audible, the audiobook industry has grown exponentially, and so has the demand for narrators. As a voiceover actor and as a fan, narration seemed like something I should try. So, I made a demo, put it up on an audiobook website and sort of went, ”Huh, now what?” The answer was, apparently, Marliss Melton. She found my samples, reached out to me, asked me to audition for HARD LANDING, I did and…she hired me. It was the first book I did and I loved the experience so much, I threw myself into the field whole heartedly.

What is it about it that you find most interesting?

I think the best part about audiobooks is that I get to sit with every single character for so long. Generally, with voice work, you read your lines in a studio and later they are turned into cartoons, or radio ads or they are laced into some larger project. With on-camera stuff, we actors are a very small part of a moving circus – we work for as long as we are needed and that is that.

But with audiobooks, every character (male, female, transgendered, alien, ghost or ancient god) I get to study and shepherd through from start to finish. The excitement of an action scene is down to how vivid I can make it in my mind; the emotion of a moment is incumbent upon my ability to convey it; the arcs of these characters are mine to explore. This is not my way of saying I am a control freak, but rather that it is a rare opportunity as an actor to have a hand in all the parts and in the world around it.

Can you describe a typical work day for you?

Ideally I wake up early. Ideally. I don’t start work for the first two hours I’m up, instead I try to work out and hydrate. Narration is a lot of hours sitting down, so it is best to use up some energy early on; and it is important to hydrate if you are going to spend your day speaking. Actually: hydration is just important in general. My first bit of work for the day will be to record and fire off a few auditions, then I will settle in and tell some stories.

What’s the best and worst parts of it?

The best part is getting to tell stories…to bring to life a tale for a new audience. I am an avid reader, but we can’t read as we drive, or exercise, or do chores. I know people who don’t read books because they can’t find the time, but who love listening to them. It is rewarding to know that I am helping to expand the sphere of people consuming literature. The worst part about audiobook narration is that, by and large, it is a fairly solitary experience. Some of the larger publishers have in-house facilities and bring the talent to them, but for most of us we work from home studios. If I am up against a deadline or really dialed in, I can find myself getting ready for bed and realizing I have not interacted with another human being in person all day. Those are, thankfully, rare occurrences.

Your latest release, NEVER FORGET, is the fourth book in the Echo Platoon series by Marliss Melton. This is also the third book in this series that you’re narrating. What would you say is your favorite thing about this book and series?

They are compelling stories and very clear characters. It is fun to have these hardcore SEALs be completely undone by strong women, even if they end up riding in to save the day. NEVER FORGET is almost the epitome of that; we get to watch Master Chief Kuzinsky – a hero of the warfighting community, a man who is always prepared for every situation – sit up in bed and try to figure out what to say on a phone message to the woman he adores. Which one of us hasn’t struggled during courtship in an attempt to say the right thing? I like how Marliss takes these larger-than-life characters, tells a larger-than-life story and still they are human. The smooth-talking Bronco manages to say the wrong thing. The level-headed Bullfrog finds himself unable to contain himself. The rock-solid Rusty loses sleep waiting for a response to a text. Marliss’ women are just as compelling; they exude all the feminine grace you want in a leading lady but they are deep wells of strength, intelligence, ingenuity and determination. Rebecca, Emma, Juliet and Maya all display these traits in their own, unique ways.

If you had to summarize this book in 140 characters or less, what would you say?

With his first wave of SEALs about to arrive at Never Forget Warriors Retreat, Master Chief Rusty Kuzinski inherits a military war dog with emotional issues. Rusty hires 14-year-old Curtis to watch his dog with an eye to wooing Curtis’s mother, the widow of a fallen comrade. But Maya Schultz’s career with NCIS has earned her some terrifying enemies, and one of them is plotting vengeance. The troublesome dog gets the chance prove himself a hero, but can will love ever triumph over tragedy? 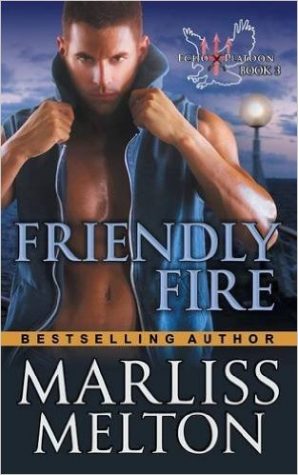 Boarding a cruise ship bound for Mexico, vacationing Navy SEAL Jeremiah "Bullfrog" Winters runs into Emma Albright, the only woman he ever loved... and lost.

Emma might still teach Romantic Lit at George Mason University, but life taught her there's no such thing as everlasting love. Good thing she can still enjoy her vacation without falling for the man who captivated her years earlier.

But re-awakening Emma's passions becomes Jeremiah's current mission until violence breaks out on their port excursion to the Mayan ruins of Tulum. Now, love may be the only weapon powerful enough to save them both, if Emma can bring herself to believe in its permanence and power.

Check out an audio sample here

Growing up, my cousins and I were raised on the stories of my grandmother; tales of traveling the world, of funny encounters with famous people, of watching – red faced – as Imelda Marcos serenaded my grandfather at a black tie function. Each telling seemed to be a little better, a little funnier and, even if we’d heard it a dozen times before, she made the punch lines land as fresh as ever.

As I got older I dabbled in creative writing and sought to find that voice in myself. After graduating from Brown University in 2010 with a Bachelor’s Degree in History (Early Modern European with a focus on colonialism to be exact, but that’s a bit of a mouthful), I enrolled in a two-year acting program at the New York Conservatory for Dramatic Arts. It seemed a revelation to me that I wanted to become an actor but when I told my family they shrugged and said, “Yeah, that makes sense.” Upon completing my course of study in New York I did what so many young actors do and moved to Los Angeles.

In my time here I have been fortunate enough to study with a slew of talented teachers, coaches and performers including: Lesly Kahn, Nancy Woflson, Kirk Baltz, Pat Fraley, Scott Brick, Brian Reise and Killian McHugh. Each of these people has helped to lead me a little further down the path that my grandmother started me out on when I was just a kid. Whether it is a commercial voice over, a web series, an audiobook or a lone line of dialogue on a TV show – it is all part of story telling. And that is exactly what I do.

Marliss Melton is the author of over a dozen counterterrorist/romantic suspense stories, including two Navy SEALs series (SEAL Team 12 and Echo Platoon), a counterterrorist Taskforce Trilogy, three novellas, and two short stories. She relies on her experience as a military spouse and on her many contacts in the Spec Ops and Intelligence communities to pen realistic and heartfelt stories about America's elite warriors and fearless agency heroes. Daughter of a U.S. foreign officer, Melton grew up in various countries overseas. She has taught English, Spanish, ESL, and Linguistics at the College of William and Mary, her alma mater. She lives in Williamsburg, Virginia with her husband and their youngest daughter, one of six children. Be sure to “friend” Marliss on Facebook! Visit www.marlissmelton.com for more information. 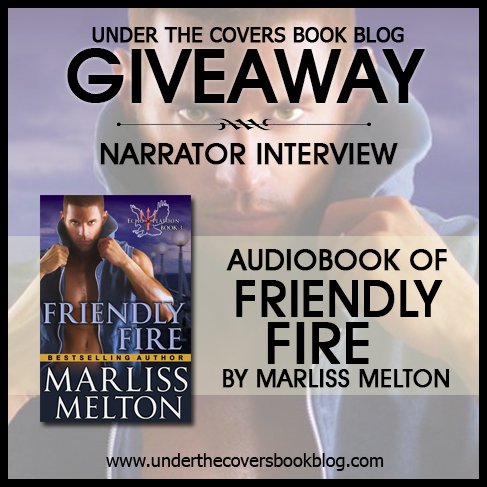 Enjoyed finding out how Armen came to do audio books and what it’s like to be a narrator. Thanks for the interview. I’m a growing audio book fan and already love Marliss’ books.

Thanks for the interview, I listen to audiobooks all the time!

I love audio books! Thanks for the interview

I love to listen to audiobooks and I enjoyed reading the interview! 🙂