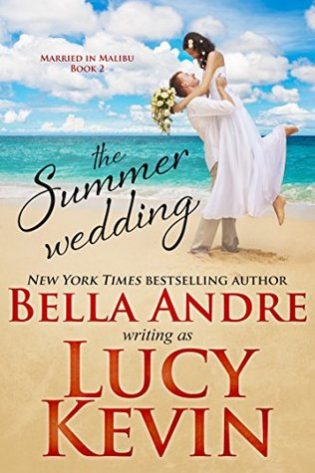 The Summer Wedding
by Lucy Kevin

“These books are far more clean cut, but not boring. Sometimes it’s nice just to focus on the romance and emotion rather than the sex.”
~ Under the Covers

THE SUMMER WEDDING is the second book in the Married in Malibu series by Lucy Kevin. If you don’t know, Lucy Kevin is the sweeter pen name of Bella Andre. This series is a spin off of Four Weddings and a Fiasco series but I don’t think you need to read that in order to enjoy this one.

This book is fairly simple in design. And it’s a story about second chances, which I love. Jenn Fairhurst is a baker, and she’s a damn good one as well. She and photographer, Daniel Brooker have been working together and hiding their feelings for one another for quite some time now. However, now is the time that they are finally going to do something about it.

When Jenn offers to help Daniel’s kids bake cupcakes for their bake sale, Daniel can’t help but notice how good she is with his kids. After going through a particularly bad divorce, he knows Jenn is fragile but Daniel thinks he might have what it takes to mend her heart.

Sweet and soulful, this book is a very quick read. I think I read it within an hour and that’s mainly due to Kevin’s eloquent writing style and beautiful backdrop of Southern California. If you haven’t read Lucy Kevin before and are wondering what’s the main difference between these books and Bella Andre’s books, it’s just that they don’t include the steamy sex scenes. These books are far more clean cut, but not boring. Sometimes it’s nice just to focus on the romance and emotion rather than the sex so I like that this author offers that option to her readers.

As this is my first time reading a book in this series, I am definitely looking forward to exploring more of Lucy Kevin’s writing in the near future.

Agreed. Sometimes it ia nice to just read about a romance.