Join our newsletter to be the first to hear our latest news! Learn More
Home / Reviews / Review: Dead to the Last Drop by Cleo Coyle 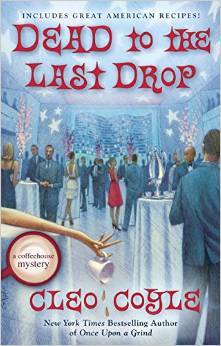 Dead to the Last Drop
by Cleo Coyle

“I think in terms of originality, this book is probably the standout star of the series.”
~ Under the Covers

With another book comes another theme and boy, does Cleo Coyle come up with something unique and creative every time. There’s no question that the Coffeehouse Mystery series is the series to beat when it comes to foodie mysteries. Cleo Coyle is always able to deliver a fast-paced story that takes you away and has your mind buzzing as you try to figure out the mystery before it’s revealed.

Each book in this series is highly engaging and I would recommend this to anyone who likes complex storylines and fun characters. There’s quite a lot going on in these books and that’s what I love about them.

For this particular book, we have a red, white and blue theme with the presence of the president’s daughter. I have never read a book like this already and when you throw in the jazz music and also the fact that it’s set in Washington as opposed to New York, it really brings new life to this series and since this is the 15th book in the series, sometimes a series needs that.

This book blew me away with its imagination and creativity. I think in terms of originality, this book is probably the standout star of the series. There are so many amazing secondary characters and I also liked the fact that there’s space for Mike to come in and be a part of everything. There’s no doubt that this series continues to get better with each book. I’m just surprised that Cleo Coyle is still able to come up with things that no one has ever done before!